Posted on September 21, 2014 by awatestaff in Articles 13 Comments 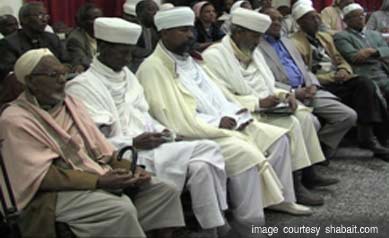 On September 20, 2014, The state-owned Eri-TV, the only Television station beaming from Asmara, Eritrea, showed the Commander of the Eritrean Police Force, Col. Mehari Tsegai, giving a lecture to a gathering of “religious leaders.”

The reports stated that the “meeting [was] conducted in the Central region’s administration Hall in which over 150 religious leaders took part.” Col. Mehari called on the “religious leaders to nurture and keep intact the nation’s cultural values.”

The following has been the reaction by some Awate Forum members; it’s presented with minor editing:

This is a joke, a real joke. After the 4 Catholic bishops issued a religious letter, the totalitarian regime that put a patriarch under house arrest and replaced him by PFDJ religious messiah, the fate of the PFDJ is coming to an end. Calling 150 religious leaders to a gathering might be one of its kind to be a held in Asmara. Worse, the PFDJ didn’t hold the gathering to speak on the deteriorating religious values under its system but to deliver a command from a police officer who told the “religious leaders” to respect the nation’s cultural values. Religious leaders are supposed to be spiritual guardians of believers and feeders of the human spirit for an inner peace.

The primary mouthpiece of the regime in Asmara, shabait.com, wrote, “The Commander further urged communities to step up collaboration with the Police Force regarding crime prevention.” Yes, the commander who is commanding religious leaders to be an extension of his office and spy on the people. This is a clear sign of a complete authoritarian system. Religion has become a tool for the PFDJ while religious freedom is totally absent.

Imagine a once a Marxist-Leninist guerilla fighter, who denounced God, command religious people whose prime mission is teach about God, to receive orders from a commander of the Eritrean police. Just imagine!

This is a moment where the letter authored by the Catholic Church priests is showing its significant influence.

Yet another shameful statement on the PFDJ website stated, ” …meeting is aimed at nurturing a law-abiding society and the supremacy of the rule of law.” Who has to respect the rule of law? The regime or the society? And where is the Rule of Law in the PFDJ system?

Society respects rule of law when the state respects it first. But what we have at the top is regime that adheres to the “rule of the jungle”, shamelessly sitting in front of 150 religious leaders and commanding them to respect rule of law while hold[ing] 10,000 political and religious prisoners who are living under the ground. Who knows, maybe the gathering place has a cave beneath it where hundreds of prisoners are living in darkness and are listening what the commander is saying!

“Where Is Your Brother?” is a message that cannot be removed from the shelf easily and be ignored. It is a message directed at the regime–thanks to the courageous religious leaders who changed the orbit of PFDJ political state.

The Commander of the police said, ” …meeting is aimed at nurturing a law-abiding society and the supremacy of the rule of law.” What a mockery!!

Some family members of the victims of September 2001 were on Radio Erena yesterday. One of the things that was said was while in prison, Dawit Issak had fainted and fell to the ground. It was because he accidentally saw his dad’s eulogy on the news paper he was reading. Imagine that! Seyoum Tsehaye’s mother said out of all previous regimes that ruled Eritrea, it is the current one that doesn’t allow family visitation. His sister said speaking up meant she no longer has the right to visit Eritrea…

As the tyrannical regime’s heinous crimes of September 2001 are being commemorated for the 13th time, it is extremely upsetting to hear such most hypocrite so called “supremacy of law” lecture by a regime that has absolutely no business in lecturing on the subject. What a contempt, what a joke!!!

Tesfabrhan, I am sure means ray of hope something to that effect, why then are you always having this gloomy interpretation of anything from home? Come on Tesfa.

If religious leaders are receiving commands and lectured on societal values by the police commander and if this is a ray of hope for you, I will just say you are the worshiper of MAN. In fact, I will not be surprised by your response because everything that comes from the dictatorial mouthpiece is your doctrine.

You said, “…why then are you always having this gloomy interpretation of anything from home? Come on Tesfa.” Did I interpret the news on unfounded reasoning? I am not a worshiper of dictators, just remember that. To expose PFDJ lies, so that the voice of the voiceless can be heard is the least I can do at this moment.

Do you remember 18/09? What is meant for you Senai? Is there any hope that is aired from Asmara?

Look, the engineer who was in the news supervising the maintenance of the dam is my former student. He is on a mission to avoid the failure of the dam because of heavy cracking and to do that 500 manpower is participating on a daily basis. Where are the machineries then? The dam is heavily damaged and is at risk of collapsing. The people could not get help from the PFDJ companies, even a single machinery, to maintain the dam. My former student and now an engineer in the sub-zone is trying his best. Within the 12 minute TV news, if you can tell me that there is at least one news of hope coming from Asmara, I will be happy to hear it.

Do not fool yourself about the good summer. Even during the best summer rain, Eritrea can only secure 60% of its cereal demand. 40% will be imported through black-market, you know very well, dear Senai, how the PFDJ trades.

The for the rest, read what saay7 wrote in an excellent way. PFDJ is there to give commands, typical of the working system of dictators.

My hope is on the letter (Where Is Your Brother?) and if you have a good heart, respond and say that your brother is everywhere, maybe closed inside container that is crossing to UK, and he is without any care. Please read this read this.

1.  “If religious leaders are receiving commands and lectured on societal values by the police commander…” is an observant reflection that highlights the poignant reality that they’ve created with denial and false hopes. If they could, they would take shelter in that sand castle home of their convoluted moral bankruptcy till the house falls from its roof above their heads to the depth of its foundations, instantly burying them under. If they are smart enough to build this grave, how do they miss it that it is intended for them? PFDJ supporters would have made the comedy of the century, if it wasn’t for the tragic consequences of their dim heartedness. The video on this link has no ray of hope in it, pure abomination. [NB: graphic and disturbing content]

2. If the regime wasn’t lead by ignorant people we would have had it. The regime a true and unyielding enemy of the Eritrean people. Within that context, I would imagine the task of exposing this cardinal truth in whatever ways possible is like saving life. There really isn’t two way about it other than (sooner or later) physically dealing with the nutcase. Can you think of “one single” right or privilege that was taken away from the people, under any pretext, being ever restored by the regime? No, because what is implemented is a deliberate act of controlled demolishing of Eritreans. That is why I don’t question the regime on the specific roles it plays as an avowed enemy, just go on attacking it. Unless Eritreans somewhat see the urgency (they know the sufferings), it would be too late. I would liken it to the strange case that if throw a frog into hot water, it would jump out, but if you place it in a cold water and then turn on the heat, as the water boils, it would sit there till it gets fried to death. Our people must re-evaluate and taking a physical measure against the mutter is way past due.