Eritrea and the Oromo Empire 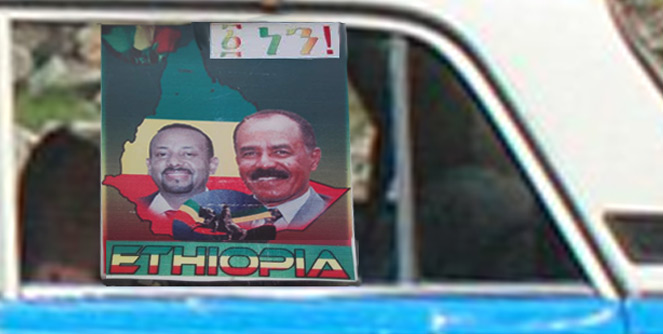 Inspired by liberal and radical ideas, the Revolution profoundly altered the course of modern history, triggering the global decline of absolute monarchies while replacing them with republics and liberal democracies. Through the Revolutionary Wars, it unleashed a wave of global conflicts that extended from the Caribbean to the Middle East. Historians widely regard the Revolution as one of the most important events in human history. (From a Wikipedia entry on the French revolution)

When the UN’s Security Council imposed on Eritreans the Federation with Ethiopia in 1952, a colonial official of the British Military Administration in Eritrea by the name of Kennedy Travaskis saw the implications of such an imbalanced arrangement early on, and gave this warning to the powerful who, as was later observed, paid no heed to his wise words[i]: The inclination to subjugate Eritrea and put it under strict controls will always remain a source of great temptation to Ethiopia. But if she (Ethiopia) tried, she would be exposed to Eritreans’ disgust and even to a revolution, which, with a little support from external powers, could undermine the pillars of both Ethiopia and Eritrea.

How did this prophecy work in each of the two countries, Eritrea and Ethiopia?

The prediction worked precisely and to the point; the pillars of Eritrea after the Federal arrangement were knocked down never to rise again until this moment. Lives were shattered, societies broke, discord and ignorance prevailed, bigotry institutionalized, education integrated to slave camps, hunger running rampant, fear ruled, country emptied, youth drifted aimlessly in deserts and high seas.

In Ethiopia, the prediction materialized in a slightly different way! The pillars of the feudal Empire were, of course, undermined, shaken and collapsed under the pressure, perseverance, and resilience of the Eritrean Revolution; it was, after all, the closed Horizons which the Ethiopian Army faced in its war on Eritrea that led it to revolt and overthrow the ancien régime. But the new militant republic, as if it was sleepwalking, immediately ensnared itself in the same game which its feudal predecessor played earlier and lost; one may see here that the definition of insanity as “doing the same thing over and over again and expecting a different result” Is justifiably avenged. The new republic didn’t know that for it, to avoid the fate of its predecessor, it had to disconnect itself from the toxic Imperial legacy especially at the point of its Eritrean policy. It didn’t, and the pillars of the new regime were, also, knocked down after seventeen painful years of trying “the same over and over again”, giving way to what seemed more open arrangement in which cooperation and mutual respect with Eritrea would prevail. For a while, it seemed that possibilities were now born for peace and development. Yet the war, soon, visited Ethiopia and Eritrea again and the two were at loggerheads again.

However, Ethiopia scored a huge military victory in this war. International geopolitical conditions, regional contradictions, and sober foreign relations helped Ethiopia to ensure that Eritrea, both in government and opposition manifestations, stay put, caged and paralyzed.

From that point onwards, riding the wave, Ethiopia soared high and started outpacing, in great strides its fossilized rival, leaving it down in the mud, achieving great goals in economy and development. But with all those shining and glittering exteriors, a side of Ethiopia remained in the mud, not far from its rival; it neglected the humanness of its citizens and forgot about rights and freedoms, indulging itself in games of power and money while justice slumbered in the background.

The inevitable had to happen and it happened! Ethiopia has taken a new turn. And this time too, to Travaskis prophecy’s gratification, there was Eritrea somewhere, if not in the title heads, then in the details and footnotes.

Is it, then, an overstretching to say that :

It is as if everything was implied and included in that 1961 moment when the first shot in the war for the independence of Eritrea was fired.

Every major change and turn in Ethiopia since that moment, and most probably until now, was directly or indirectly influenced by that moment…is it not there, related to this also, a justification, after taking the necessary notes and considerations of culture, geography and historical contexts, to fall into the temptation of thinking along a rough parallelism, and conclude that the Eritrean Revolution has projected on Ethiopia, since September 1961, an influence similar, in few aspects, to what the French Revolution projected in Europe at the end of the 18th century and beginning of the next century?.

Most of the Ethiopian political and national movements (in the contemporary sense) appeared in a defined manner only after the eruption, maturity and advance of the Eritrean Revolution. TLF, TPLF, OLF, and others were raised to develop and grow in the school of, and under the patronization, of the Eritrean National Movement. Care should be taken at this point to understand that this is said without denying or minimizing, the existence of grievances against the Empire by the different concerned parties and the will to resist it; what the Eritrean National Movement provided was the precedence, the climate, the context, and the method.

Now, the time has come, as it seems, for a new Ethiopia to emerge, one with a facelift, and under new management in which the Oromos are on the driving seat. The question asked by many Eritreans is: is this new regime going to opt out and wean Ethiopia off the elusive dream of “Eritrea under the yolk of Ethiopia”? Is the new regime going to evade the Travaski’s curse and dissociate itself from the old grand dreams of Empire which includes Eritrea?

Back to 2012, back to the time when the late Melles Zenawi was the voice of Ethiopia, and to the time when the AU, subsequent to its erection of Kwame Nkrumah’s statue outside AU’s headquarters in Addis Ababa, approached the prime minister, seeking his approbation and blessings for their proposal of erecting the late Emperor Haile Selassie’s statue outside AU’s headquarters in Addis Ababa. Zenawi’s say was an emphatic No to the proposal and stood in the way of Ethiopians who campaigned for the statue’s erection, and in the context of answering a question in the parliament named Haile Selassie a “feudal dictator” before characterizing the campaign as disrespectful.

Times have changed, February 2019 came and with it the unveiling of the Statue of HIM Haile Sellasie, blessed, as it seems, approbated and paid for by Ethiopia. This is how an Ethiopian website related it to readers:

“The current administration of Prime Minister Abiy Ahmed is believed to have played a positive role for the erection of Emperor Haileselassie’s statue at the AU headquarters”.

This raised few eyebrows because it seemed odd that, at this time, when the Oromo star is rising, an Ethiopian government (Oromo controlled in all but name) would rush to the erection of a statue commemorating a symbol of tyranny and oppression not to the Oromos only, but to the peoples of Ogaden, Tigrai, Eritrea and others, and pay for it too.

An Ethiopian Somali offered an interpretation to this paradox by folding the entire situation in a humorous anecdote which goes, roughly, like this:

When an Oromo came back home after long years of absence in America for education and study, one of his friends asked him: “and Now what do you want to be?”

“Now, I want to be an Amhara” was his reply!

However, the anecdote may seem sour and politically incorrect, where it shouldn’t, for it is, in fact, a simple adoption of a well established sociological hypothesis: “the vanquished assimilates himself to the victor in the use and style of dress, mount, and weapons, indeed in everything.“ as “Ibn Khaldoun” A pioneer of sociology puts it in his “Moqaddimah”.

Were the Oromos, vs. the Haile Sellasie Amharas, not the underdog and the vanquished society as were many other communities, for many years, and until recent memory?

Given the signs and the gestures emanating from the highest levels of the new Ethiopian ruling centers, there are Eritreans who find It difficult to escape believing that the Abiy–Megersa team is not busy resurrecting the long-dead Amhara Empire of Haile Sellasie with all its extensive old borders which allows it to stride on Eritrea and dangle its feet in the warm waters of the Red Sea, the difference this time is that the Oromo will be in control: HIM Haile Sellasie’s goodies in fresh package and new colorful shrink-wrap. This was the gist of the anecdote and this is, additionally, the abstract of the philosophy of Medemmer.

Considering the historical covetous eye of the successive Ethiopian regimes on the Eritrean Red Sea strip, and considering those regimes’ habit of quick resort to violence to achieve their ambitions, the news that landlocked Ethiopia is building a Navy anew, should be a source of great concern and worry to Eritreans and perceive it as an act of belligerence directed to them. One imagines an authentic responsible representation of the Eritrean Nation, would, by now have a complete assessment of the impacts and effects of the Ethiopian move on the Eritrean independence. It would tell its people if there were implications to the move, and if the case was so, what and how a reasonable reaction will be formulated. But, to the dismay of the Eritrean people, the current representation seems to be either in deep sleep or going in cahoots with the plan. As for Abiy-Megersa team, they appear to have no interest in breaking the Travaskis cycle of curse, and if they continue sticking to that they will, like their predecessors, in time, learn the hard way, when it is too late.

[i] P 227 Arabic Translation of: Eritrea, a colony in transition by K. Travaskis