A Historical Peaceful Demonstration In San Francisco Ended With Success 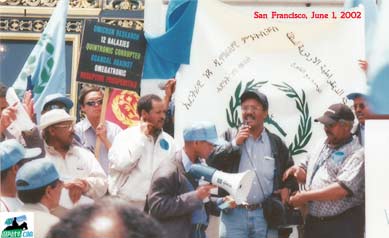 A History was made in the City of San Francisco on Saturday June 1, 2002.  The Alliance Forces, Eritrean People’s Liberation Front Democratic Party (EPLF-DP), Eritrean Independent Democratic Movement (EIDM), Eritrean Human Rights Advocate Group (EHRAG), and many concerned Eritreans flocked to the heart of the City to express their rights and voice against the one man and one party dictatorship in Eritrea.  Hundreds of Eritreans from all sorts of life; adults, children, students, men, women, boys and girls from the cities of the Greater Bay Area showed their determination to fight the unjust system that is suffering our people.  Supporters as far as San Diego, Los Angeles, San Bernardino, Sacramento, and Fresno Counties came to show their solidarity in the peaceful demonstration.

Chanting was supported with microphones that blasted the city streets. Banners were prepared in Tigrina, Arabic, and English.  Merchants, pedestrians, and strangers showed their support by standing and clapping.  Media people participated the march and documented all events.  Also, journalists from Awate.com and Asmarino.com participated and documented the whole event.  The symbol flags from both The Alliance Forces and EPLF-DP gave the demonstration a special effect.

Misguided PFDJ members mostly women and children dragged by their local leaders came thinking they were going to conduct demonstration of their own.  Since they weren’t awarded legal city permit, they end up contained at UN Plaza public-park, one corner of our route, and screamed the usual PFDJ lyrics, “Weyane/Agame” out of frustration.  It is sad to see citizens who always walk in their sleep.

The journey came to stop at City Hall where people chanted the slogans loudly and speakers representing all parties spoke one by one.  A representative from EHRAG read a list of sixty-five people who had been jailed by PFDJ between two month and seven and half years without due process.  Representatives from Alliance forces, EPLF-DP, EIDM, and individuals spoke to continue to fight the dictator until his demise.  And finally the demonstration came to a conclusion at the schedule time 1:00 pm with a national anthem, Nwegenom kblu Zchiqunu, and one minute memory of our martyrs.

The demonstration was the first of its kind in the west coast, specifically in the Greater Bay Area where PFDJ and their cohorts thought it was the untouchable territory. On June 1, 2002, that foundation had been uprooted and the wave of change and democracy is surfacing for good. The City of San Francisco had witnessed the voice of the people.  The quality and quantity of demonstrators dominated the handful-misguided puppets.

San Francisco Police department were amazed by the discipline and civility of the march and thanked the demonstrators for their excellent behavior.  In contrary, PFDJ’s cohorts tried to be violent but were stopped and herded by police at UN Plaza Park.  It shows the culture of PFDJ and its master.

Overall the demonstration was the strongest of its kind in this region and was so successful.  It accomplished its mission and hit its objective excessively. The demonstrators had exposed the true color of PFDJ and its leader to the City and the world.  They passed message to the world for the voiceless.  The voiceless in Eritrean jails and the voiceless in every home in Eritrea who had been the victims of psychological terror for the last ten years by the one man and one party dictatorship.  To all demonstrators, this was just the beginning and many of these are going to come.  The foundation of PFDJ and its new consulate in Oakland are already starting to demolish.

Victory to The Supporters of Peace and Democracy!
Our Fight Will Intensify!
Down with Dictatorship!