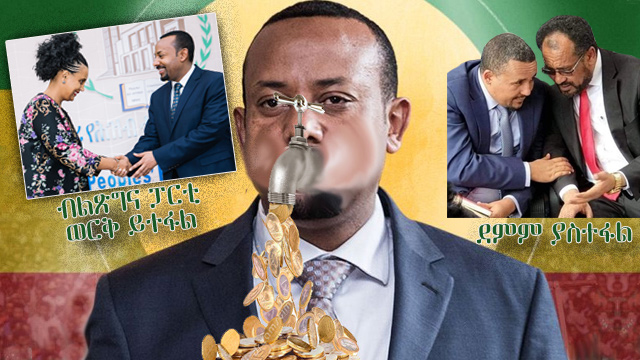 Freedom of Expression Forum in Oslo

About a decade ago I attended the exquisite Freedom of Expression Forum in Oslo, Norway, where many dignitaries and activists from around the world flocked. As a skeptic, I observed the activities of the event critically—blame it on my experience with political NGOs operating in the Third World. But I prayed the Oslo Forum would not turn out to be a disappointment. It was not as bad as I feared, but it was not very dissimilar either.

I have limitless respect and admiration for the non-political NGO’s, the charitable entities whose members get their hands dirty, live in dangerous places to help the poor and the destitute while exposing themselves to great risks, selflessly driven by their conscience and care for humanity. If they were selfish, they wouldn’t have left their comfortable homes to live among the destitute people, teaching, feeding, providing healthcare, and digging wells… they are the heroes.

That’s why I despise the preaching of Prosperity Gospel, where tricksters convince their audience, ‘God told me I must have a private jet and a mansion; go ahead and donate the needed money, I got to have my jet and mansion.’ Now little pastors are doing the same in Ethiopia; I watched such a trickster who makes imaginary karate moves and some people fall to the ground with the imaginary kick of his leg—supposedly blessed. They must have been trained by the political NGOs.

It’s common to see political NGO workers who supposedly go to poor countries to help the poor but first they establish for themselves a 5-star hotel lifestyle, probably better than the life they left behind, which could be less than a 2-star lifestyle. I resent those who have created a class of their own and live aloof, on a different level as masters of those they came to serve, like wealthy tourists. And this is evident for anyone who visited Addis Ababa or lived there—in 1990s, most of the cars parked at the Hilton Hotel carried charity registration plates; only wealthy tourists, diplomats, and charity workers afforded to dine and wine at places like the Hilton Hotel.

I admit my views could be harsh, but it’s influenced by my young adult experience, in secondary school, I had young carefree peace corps teachers.

The Oslo event kicked off with a rudimentary stereotypical show of an African group of four or five people with African drums. They appeared from behind the hall and walked to the stage in a solemn procession as if they were accompanying a coffin to a graveyard. The songs they hummed, the costumes, and the stereotypical beat shocked me; I would have appreciated a Norwegian group because the event wouldn’t have looked as if it was tailor-made for Africans. Condescending?

Usually, such events are heavily loaded with entertainment and promotional activities, and then the excited attendants clap and cheer. That is what happened when the entertaining group finished its gig.

The Norwegian foreign minister delivered an opening speech in the function that anyone worth his salt in the activism industry attended. Then we listened to many speeches and emotional stories of imprisoned activists in dictatorial countries… I would have appreciated some of the narrations if they didn’t sound so comical. Someone gave a speech and emotionally told us Burtukan was “jailed in a rat-infested prison cell.” Many people went, “Uhhhhh!”

I am not sure if it was a surprise m-shock or faking of one. I sneered. But then I was curious: it was the first time I heard the name of Burtukan Mideksa, the Ethiopian politician who was languishing in jail.

I have visited the Arat Kilo Palace twice and I am sure an army of rats lived there, starting from the gates that looked like a makeshift roadblock built by lazy, tasteless soldiers. But then I discovered it was inherited from the Derg, a military government whose building codes are like the codes needed to build ugly, rudimentary trenches.

Since I first heard her name, whenever Burtukan Mideksa is mentioned, the image of rats appears in my mind. Now, luckily, she is the Chairperson of the National Election Board of Ethiopia, and I bet there are rats in her house even if they don’t live there, just visiting every now and then. The same goes for every house in Addis Ababa though you would never hear people complaining, “ebaakih betaachn enchewa gebchbet eko!” and the response would be, “Uooooy, mn telaaleh ebaakih? Enchwa!”

There is a rule in our region: a government jails people, then it’s deposed, then the new government frees the prisoners and rewards them with important government jobs, then they shine, they take revenge on those they think were the reason they were jailed. Then, until the government is overthrown again that’s, those who are perceived to be sympathetic with the previous government will end up in jail… and the vicious cycle goes on. And that is the risk of not having a stable system of government, the absence of rule-of-law, and a culture that claims to respect justice but despises it. Life is about partisan squabbles and endless ethnic, sectarian, regional, and racial feuds, and rivalries. That’s why I think no one cares about the rats, the pests, or the human serpents—that’s the reason for the existence of embarrassing governments. Now I am thinking about Burtukan Mideksa’s domain, the election. Why did Abiy delegitimize the Tigray regional elections?

In hindsight, is Abiy’s draconian decision a prudent step (forget good or bad decision)? What does Burtukan think about it? Is she fine playing along in partisan politics when she is a well-educated and a one-time judge who served justice? Or, she has excuses and justifications based on the views of her employer?

Since she had resigned once in the past for rejecting to work in a certain “circumstance”, and she was jailed for it, does she consider resigning now? What does she think about the jailing of the hundreds of citizens for opposing Abiy’s government? Jawar Mohammed, Bekele Gerba, Hamza Adane, Dejene Tafa and many others are in jail without trail–are they sleeping in prison-cells infests with rats? Maybe Burtukan Mideksa has another excuse, and she could say, “I work for the elections board, not for the justice department!”

Remember Kheria Ibrahim, the much admired and promoted speaker of the house until she has a fall out with Abiy? She is now in jail, in undisclosed place. He used her as a poster woman to convince the world he is committed to gender equality when he appointed so many women in his cabinet—surprisingly, now all the women grew beards, and he is left with a mob of gun tooting violent men.

Last week Kheria was dragged to the court to testify against her bosses, including Sebhat Negga. She refused to do so and instead, in the court, she exposed the criminality of Abiy’s government and the atrocities he unleashed on her people. She was taken back to the undisclosed prison though she appealed in court to be taken to the Kaliti prison. I am sure she doesn’t have an idea there are rats there! Now, if a meeting is held in Oslo or elsewhere, she needs someone to tell the world “Kheria Ibrahim is jailed in a rat-infested prison cell.” Would Burtukan do that for Kheria?

Personally, I am “fractionally” happy Lidetu Ayalew is free at last—he is one among the few Ethiopians I really consider my spiritual colleagues in the struggle for justice. But I personally feel an obligation towards Jawar since we have known each other though not in person. I admired the man because of his unwavering position since I first talked to him. I liked what he stood for and now he has been in jail with his colleagues for a year and the Ethiopian justice system has not helped him. That’s why it is clear to me the man and his colleagues are victims of the vendetta conveyer-belt; rats or no rats, I wish they do not have to languish in jail until Abiy’s government is overthrown. And remember, the same Jawar was the effective instrument that brought Abiy to the fore.

And the Prosperity Gospel, coughs out gold coins.

Currently, it all depends on Abiy Ahmed’s conscience—Isaias should be proud of his star student whom he trained and graduated with flying colors. Even Abiy’s senior cadres are acting as cloned toys of Isaias’ cadres—including Shimelis Abdissa, the secretary of the Oromo region who displays undiplomatic, belligerent attitude.

I don’t know how soundly Abiy sleeps knowing he has betrayed his close allies! Worse, he has betrayed justice and fairness. He plunged Ethiopia and Eritrea into turmoil and caused the suffering of millions of Ethiopians, particularly in Tigray where people were killed and are being killed as you read this. Is there a way to stop the madness? If there’s, TIME is of the essence. If not, the damages already seem irreversible.

1. COVID 19 Vaccination: Last week I took the second vaccination and I encourage all to stop acting like spoiled brats and be vaccinated—it’s effortless!

When I took the first one four weeks ago, it made me sleep—one time I slept straight for 19 hours and I wished the second one would have the same effect, I needed to rest. No, it was different and unlike the first one, it tortured me for days. But don’t be alarmed, different people react differently. And if you pray for the demise of Isaias and Abiy while talking the vaccination, it helps. The Prosperity Gospel/Party (no difference between the two) is blessed, it even coughs gold coins. So, go and get over with the vaccination and claim your social freedom and stop looking like a fake Zorro with a mask over your nose and mouth.

2. Abune Aregawi: A friend reminded me of Abune Aregawi whose brief story I should have added in my previous episode of Negarit 130; it’s here:

Abune Aregawi is a revered saint in the Tewahdo Christian tradition. However, many people think he hails from Rome when in fact he hails from Syria. However, since he was born in Byzantium, Eastern Roman Empire, he is considered a Roman citizen at the time.

Abune Aregawi is named after his hometown, Al Rikka, thus Al-Rekkawi which in our region is pronounced Al Riggawi but finally became Aregawi. Rikka is a town in north-central Syria and was the stronghold and capital city of ISIS (Daesh).

After the crisis following the conferences of Ephesus and Chalcedon, many persecuted Christians fled to places where their faith was tolerated; the nine famous monks from the region immigrated to Abyssinia and founded their own monasteries. Abuna Aregawi founded the mountaintop Debre-Damo monastery in Tigray. Folktales claim a python (the saints icon depicts a green Anaconda coiled around him)  carried him over the steep slopes to the top of the Dammo Mountain. Folktales also claim he sowed seeds in the morning and by midday he harvested, winnowed, and collected the grain. And when he died, at 93, his body disappeared and he is expected to come back on doomsday.

Such are the folktales, it’s faith and no one is supposed to prove a belief unless they try to convince others who consider the story irrational. However, there are many such traditional tales in the literature of many faiths, including some Muslims who believe the story of Yaafour the speaking donkey. And that is why a secular system of governance is in dire need as the region, with lots of superstitions, has veiled (sometimes not so veiled) theocratic governments.

NB: this is extracted from Negarit 131, at Negarit, my YouTube channel