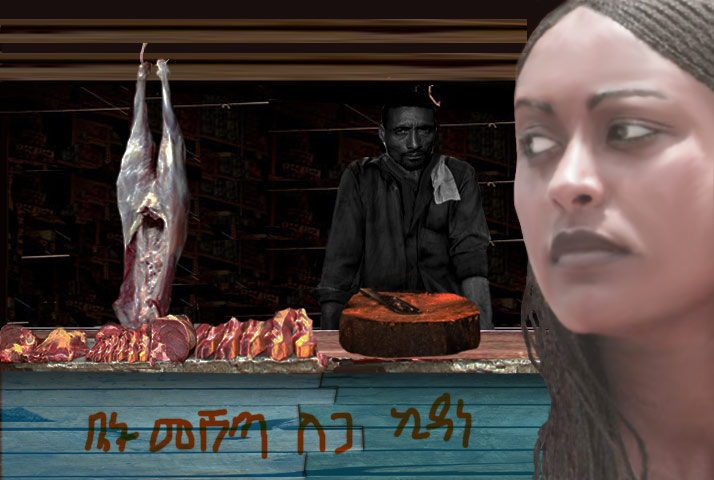 I relished it and my friends provided it. Truth be told, I was addicted, but it was all for a good cause, it was to impress the girls. I was in love and addicted to two cousins, but they manifested through one person.

It was in unlikely place that I first noticed Leila, she was with my cousin who was buying a Christian meat from Abboy Kidane’s joint, the Christian butcher in Kassala. I was there to run an errand, a favor for an elderly relative who had already placed her order the day before. But, I thought I was a good sport and waited in line like everyone else, amid young blushing mothers, who shouted, “kilte kilo abboy Kidane …”.

“Klte Kilo!?”,  asks Abboy Kidane, “what are you going to feed that hardworking poor husband?”

Then he would mesmerize the customers with his own lyrics, “nay awtisti zelelwo zeity, nay memhir zgebir teamer….”, then he would turn to his son, John, and would shower him with praises, only to turn abusive the second John slightly misses something. He would turn to his daughter and tease her about her future husband. Everyone would laugh, Abboy Kidane was not only a good businessman, but was an artist, an entertainer.

When it was my turn, I relayed my message to aboy Kidane, he immediately said “fezaaz”, what were you doing all these time waiting like a fool. An argument ensued and I left unhappy. My cousin and her friend Leila would tease me about this incident for years, until life caught up and they forgot about it, when family got on the way, when distance got on the way, after we all left the dusty streets of Kassala. It was a crime to argue with Abboy Kidane, they told me, but a rookie that I was I did not know better, they said, Maelesh!

Disappointed and with the words, “Fezaaz, Nay awtisti, zelowo zeyti….” reverberating into my ears, and the image of young mothers scrambling for “klte kilo, seleste kilo,” to feed their children and husbands with a Christian slaughtered meat replaying in my mind. I wondered about the differences, the poor animals are killed anyways, I thought.

Six months later, I summoned the courage to expose my Arabic illiteracy and asked Awet, my neighbor kid to deliver a love letter to Leila. My several trips to her house to chat her up were futile and when one day I learned that her elderly aunt who lived with them murmured, “hashaka, le welet hsrka alebba.. mai gba’e”, poor thing, the girl is not interested in you. I knew the reasons. Crushed but undaunted I vowed to learn the tools of the craft, Arabic and Tigrayit. So I asked a friend to write and recite the most romantic poem he knew. It took Salah a few seconds to write and recite Ahmed Shawqi’s famous line, I copied what he wrote with my own handwriting. It said “…w’te’attelet luqet al-kelam, wo khaatebet ayneya fi luqqet al-hawa aynaaki….”: the spoken language has malfunctioned, but my eyes addressed your eyes in the language of romance.

So, When Awet delivered my unintelligible writing, he reported that Leila struggled to read my writing, she squinted her eyes, frowned and then she wrote back one line, “min alqaeel wo ma almunasseba?”: who said it and what was the occasion. I wrote back, “Waahid wed hlletna”: a kid from our neighborhood. Awet delivered it again and he said she laughed hard and he brought back a verbal message: to stop writing her until “fanguH laha”. Confused, I left. I gave Awet something to buy sweets with his friends. With the corner of my left eye, I saw him as he turned by the corner, stepped over his dog, swerved to avoid a boy who was riding his bike and slipped to a shop.

Report time. My friend. Salah, who tutored me in Tigrayit was waiting and he laughed hysterically when I told him about a kid from our neighborhood story. It is from Ahmed Shawqi, Ya Jarrat Al-Wadi, not a neighborhood kid, he said, still laughing. And he told me “fanguH laha” means the day after tomorrow in Tigrayit.

And when months later, after a tea-party Leila said to me “taalenni”, I said “koyis” but I did not move. I did not understand that she was saying to escort her because it was late, another kid, a rival took the opportunity and basked in the honor of accompanying a girl. I goofed and was laughed at.  But when the next time she said to me “taalenni”, having refined my Tigrayit, having acquired a passable accent, having an ever burgeoning Arabic vocabulary under my belt, having shed my blooming and adolescent Asmarino mannerism, having tempered my highland temperaments. I was ready. With my head swollen, I replied, “aabe”, a Tigrayit for empathic YES and stood up and walked with her to the delight of my best friend, Salah.

I lead her via the dark side of the neighborhood.

“There is no electricity that way”, she said

Who needs electricity when the light herself is present here, I replied, in Arabic with an amalgam of confidence and a tad of cockiness, seasoning the dialogue with Tigrayit whenever I could.

“La, telaaqa, laitha mubaleqqa!” No, it is not exaggeration, it is eloquence, I said as she successfully wiggled her little finger from my hand.

Undaunted, I run my left hand through her raven that was covered by a shawl and I glibly said, “w’lemaaza aynaaki thawarer”: and why are you rolling in your eyes to my “telaaqa”?

“Someone can see in the dark, Jella jellalka rebbi”, she said

“No, it is not dark, the light is here, remember?”

“Rebbiiki emeni”, I said, making a bad impression of one of her relatives, I felt my neck getting weaker to support my head that was swollen like an inflated balloon.

The dirty darkness was my accomplice and I felt the texture of her raven wavy hair for the first time, a hair I noticed during our first encounter in the Christian butcher store when I made a fool of myself to argue with the popular butcher in town.

Her heart palpitating, her palms sweating, she said, “It is getting late, let us talk while we walk.”

“Ya selam, naagsa al Oud bes”: wonderful! but only the Oud is missing, she joked

She pulled me from the darker alley to the lighter side and let my hand go immediately.

I lurked in a corner under my accomplice’s cover, the darkness, to make sure she safely entered her house.

As I stepped back, the pitch darkness was pierced again, when she said, you are not “wed hlletna” any more, you are “weled beledna”: you are not the neighborhood boy, you are a citizen, one of us.

One fine evening a while later, I knocked on Leila’s door. She opened it, she was cramming for her matriculation.

No, I cannot, “anna beal Hsir anna wo tellel”, I came for a purpose and goal I said, with no purpose except to show off my enhanced Tigrayit, remind Leila of her late aunt’s “Hsirka alleba….” and how she cashiered me for a year.

“eway derrona”, she said as she burst into laughter.

Then I heard, my cousin, her best friend, say, “dehando knddzi sehaaq…” from inside the house.

“I am leaving Sudan”

As we walked in, she asked me about the date of my flight.

“Wo hasset!”. FanguH laha will not even be enough to get you back to Khartoum.

Still laughing, she handed me a steaming cup of tea and Saba and Leila would embarrass me in the presence of Leila’s mom, Kadijah, about the incident at Abboy Kidane’s store years earlier.

Aunt Kadijah gave me all the blessing in the world, she named all the saints and Sheiks, dead and alive, Christian and Muslim.

Years later, in Canada, I received two letters, one from Awet and one from Leila.

Awet grew up to be a fine young man with a wicked sense of humor and he wrote that he was doing fine, and that he was assigned to mlikit, “the experience I gained delivering messages and letters to Leila benefited me”, he joked.

Leila, in keeping with her impeccable sense of humor, opened her letter with “…  today I write with Hsir wo tellel.” And she announced that she will be married next year.

Therefore, there is no “Mensaayit” sitting dictating Tigrayit, rather this was an “addiction” acquired during the teenage exuberance, at a time and place in the Eritrean life when actually learning these two languages was a craft and not a tool for cleavage. And a craft that dazzled and charmed the girl with raven hair and warmed her heart. But there was a “Mensaay”, the character Salah, who was kind enough to become my best friend from the day we met.