Posted on April 29, 2019 by Ambassador Haile Menkerios in Articles 222 Comments 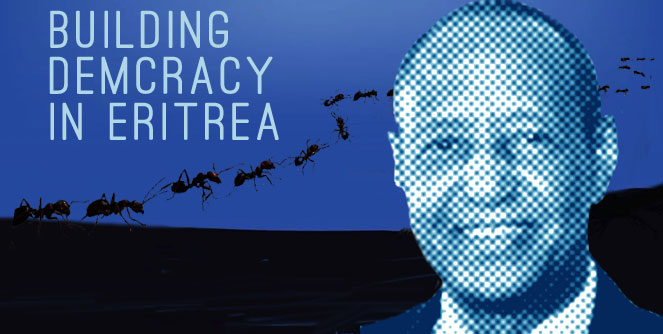 It is long overdue to discuss the need for building democracy in Eritrea, a country which has the notoriety of being perhaps the only country in Africa that does not have a functioning constitution, a legitimate/elected government, or legitimate and functioning governance institutions that ensure accountability. Since gaining independence, Eritrea has been ruled by a militaristic one-man dictatorship that believes in using force to resolve conflicts/disputes internal and external rather than pursuing legal and peaceful means. Besides being known for its use of cruel extra-legal measures to silence any and all critics, let alone opponents, inside, the Eritrean regime has also the notoriety of forcing Eritrea to become the only country in Africa to have been at war, directly or indirectly, at some time or another, with every one of its neighbors!

Generally speaking, other liberation movements that won independence or liberation through an armed struggle have also established one-party dictatorships with varying degrees of accountability to the general public. A key characteristic of the political parties that were established by these movements is that they controlled armies, police and justice institutions, and it was these institutions that also became institutions of the state. The distinction between institutions of the party, the government and the sate disappeared. In such countries, building democracy with public institutions independent of direct control by political parties is an outcome that is yet to materialize. In this Eritrea is perhaps unique only in degrees.

Eritrea’s particular history and experience of decolonization have contributed to the unique nature of governance that has been established there – a one man rather than one party dictatorship. To a large extent, the basis for this was, in my opinion, the nature of the struggle we had to wage: A struggle against a much bigger and stronger Ethiopia supported by the African continent and both the West and the East – a peculiar characteristic.

The enemy we had to fight was so formidable that getting rid of it consumed the major part of our energy, and we did not exert much effort to adequately plan and prepare for what and how to build once our enemy was defeated. Indeed, we built a very efficient fighting machine in the EPLF with absolute discipline and a hierarchical system with an effective military.

Despite the prevailing rhetoric during the struggle, however, the EPLF did not encourage debate and discussion to develop concrete ideas about our future after independence and establish institutions or safeguards to ensure their implementation. What was our strength during the struggle thus became our weakness after independence! For better or for worse, those of us who participated in the heroic struggle of the Eritrean people for independence contributed to the development of the dictatorship we have now. One can perhaps see a similar parallel in the Arab Spring countries where people were united against very formidable regimes determined to destroy what they hated but did not spend enough time and energy to articulate and organize for what they wanted to replace them by. The result has been somewhat similar – even worse (chaos) in some situations.

I believe that in building democracy in Eritrea, our particular history and its legacy need to be taken into consideration. I would suggest that in thinking about how to move forward, we consider going back to what we could and should have done in 1991 immediately after liberation: Call for a national conference of representatives of the Eritrean people that would decide on a transitional arrangement to ensure an inclusive process of building participatory democracy in the country. I believe only such a process can prevent destructive violence. Such a process has been pursued in other parts of the continent with a fair degree of success, though unfortunately only after violent confrontations with much destruction.