Winter Blues And Another Year In Transition

Posted on January 17, 2014 by Abdulkader O. Ali in Articles 5 Comments 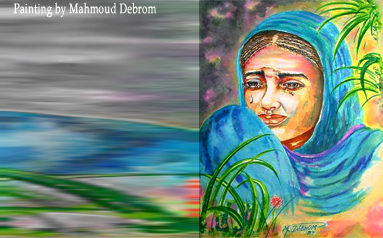 A Prologue to
Winter Blues And Another Year In Transition

A friend called me up seeking for help looking for a bit of information
But despite the focusing and the serious concentration
Nowadays, however, without concealment or beautification
My memory, ailing as it is was not helpful and flashing in recollection
So as a booster for the recall I suggested switching our attention
Maybe this trick may work as a distraction for the mind from its obsession
Allowing us to come up with the desired information
Intuitively or who knows maybe by Devine intervention

So without thinking I began to read the work at hand, my own personal cogitation
As a shift of attention, a change in direction to help the memory’s rejuvenation
The friend was captivated right from line one and was full of admiration
Apparently impressed he kept on prodding me for continuation
Asking every now and then who might be the author and if the work was up for publication?

“These are private musings, spills, bouts and rounds of self-consultation
Which pop up by themselves without any effort from me or any request or invitation
To relieve the busy mind and free it from its clatter and burden by way of perspiration
By catharsis lest the grey matter boils, and melts to annihilation or explodes to disintegration
Just a vent for the sanity of the brain which is loaded with thoughts beyond saturation
No not at all, my dear friend it is a hocus pocus a private rumination
Not intended to be shared in any form of publication
Neither written nor read in an oration or an oral narration
Except for you and only for now for this occasion”
Was the spontaneous response from the author without any pretension or calculation

However, the answer was not convincing at all to my gracious friend’s determination
Who was bent to see the work shared now in winter, in this season of jubilation
When Old Man Winter seemed to have heard my call and instigation
And decided in response with furry and tempest to end his indecision
Show-casing globally a sample of God’s mighty works without any hesitation
In a split second storming the world with a variety of down-pouring beyond imagination
Darkening this region and flooding the other while freezing that part and paralyzing transportation

Seeing her excitement and the friend’s admiration
And the common appeal despite the gap in the generation
I gave in to the idea of sharing these lines as they are without the proper versification
Perhaps someone may find in them some benefit or joy and felicitation
As did my caring friend and as my loving daughter found joy in my private cogitation.
A cogitation originally born in the following form and rhythmic presentation
Before metamorphosis took over or you might say evolution
Came along brandishing survival of the fittest and dictated its usual selection
In this case changing the ending rhyme from ponder to contemplation
Here we go such was the beginning of the poem in its original rendition

“As my days dwindle by the minute and with every breath my nights wander
On this cold winter night as the year breathes its last in these early days of winter
I sat by myself in wonder to contemplate and ponder
On my life in this mine adopted deceiving shelter
Which impoverished me and infringed upon my dignity and honour
When it barred me from a decent job as a bread earner
Not  even a slot in the cheap menial labour
Alas how degrading it is for a man with talents to be relegated to the corner! ”

Originally that is how it began before it turned out in the following manner
In its second coming, with a different rhyme and selfsame banner
I hope it is worthy sharing with you my beloved reader
Accept my apologies please for the short comings and the plenty of error.

Winter Blues And Another Year In Transition

On this cold winter night in a private seclusion
As yet another year winds up to its culmination
I sat by myself in a moment of thought and reflection
In pursuit of clarity, guidance and the right direction
Perhaps through facing the demon’s coercion
That shackled me with some kind of depression
As a result of the subtle velvety oppression
And sometimes of the out and out naked suppression
Coupled by the unforeseen ups and downs of life in many a manifestation
Perhaps reprimanding the ego by way of admission
In this private monologue and self-discussion
Or by confronting the self in a critical honest confession
Perhaps a means of consolation or even a solution
To this miserable life I am leading in degradation
Maybe a way out or some kind of a wise suggestion
May perhaps transpire by some kind of heavenly inspiration

But as I sat sincerely in earnest and in deep concentration
Gloomy Old Man Winter broke my solitary contemplation
When he growled roared and howled in utter indecision
In a bad manner and you may say a rude interruption
Unsure if it was going to rain, snow, hail or blow freezing precipitation
Or send black ice or deliver a shower or maybe spray fluffy flurries in all direction
In dismay, in despair I cried out “Oh! Winter” in my consternation
“Oh! Mighty General Winter, despite the wide open vastness under your domination
You too like me are subject to attitudes, altitudes, latitudes, highs, lows and depression!
What is holding your hands, Mighty winter, tell me why give bondage to in-action?
Why don’t you break the shackles, smash and demolish the unfair lines of demarcation?
Let the snow fall gently or blow the roaring wind or even better drown the nation
But with all your might never stand still indecisive restless in perpetual fluctuation.
Oh! Mighty winter, why are you so helplessly out of commission?
Have you forsaken your mighty mission?
And so easily succumbed to depression?

When unlike me, you have no colour, ethnicity or denomination
Nor were you hurled like me by fate to taste humiliation after humiliation
First in my own homeland and then endlessly across the globe in frustration
Stateless, humiliation followed me alas, in every stop and in every destination!
Exiled by my motherland which was usurped by the rogues and defiled beyond recognition
Only to find myself in this prosperous land of migrants and immigration
That braggingly claims to give precedence to merit and qualification
While in reality it is not what you know that matters here in all occasion.
That, here, my gullible friend, is simply put,   – a mere fiction
Wishful thinking just a specter of flimsy fertile imagination
On the contrary, in this country the fact is, for your kind information
That your success depends wholly if not solely on your identification
Who and not what you know is that determines your socio economic promotion
Your mobility and status in the social and economic ladder rests not in education
Rather it is your ancestry and who you were born to and their hue and complexion
That defines your success and prosperity and predetermines your social gradation
In this land of affluence where the whole wealth is robbed without any consideration
By the select few who are nothing but an iota of the whole population!
In this land of plenty and yet infested with injustice and poverty is gripping the nation
Home of hypocritical scandalous politicians gone out of all bounds and dimension
Accompanied by their brute immoral cousins who run amok all decency and obligation
The fowl scoundrels who run the evil money mongering corporation
A land that brandishes lovely but empty slogans for home and world consumption
While faking equality, equal opportunity and shunning discrimination
When in reality discrimination is the rule, and the policy is subjugation.
That is the grim reality said in plain language and far from flowery manipulation
Far from political correctness, so called civility or any other distortion
How cruel it is to impoverish, deprive humans from hope and aspiration
When even decent bread earning is exclusively owned by nepotism and corruption!
Such is the system, yet this doesn’t deny the goodness of the people and their compassion
But the powers that be, those who plan and run the show and shrewdly lead the procession
Are as described above, if not worse in all certainty and without the slightest reservation
I swear by God’s help that I shall rise and attain here and now my
salvation my emancipation
Keeping my dignity, working hard to secure my place in this human jungle and so called symbol of civilization
I’ll try to maintain my cool, if I can, despite my burning indignation.
I’ll keep my head up and fight against, tyranny, injustices and all forms of exploitation
I refuse to be defined by others, I know who I am, I am a dignified human being – the gem of creation
Who repels harassment, is undeterred by intimidation and knows no submission

I bow not to any one nor do I give in to despotism be it of individuals or of groups in any organization
That adage in a nutshell my friend is one of the brain children of this short lived introspection
An introspection, a rumination which to my surprise despite the Old Man Winter’s intrusion
Poured, flowed and gushed with these rather lengthy verses like a volcanic eruption
They are just musings of the soul and out bursts of internal whispers not meant for publication
Had not some friends pleaded and suggested out of their regard and kind consideration
That these musings be publicized timely now as the year breathes its last according to their recommendation
And that there was no point for any undue procrastination
Or uncalled for delay from my part to share these seeds of contemplation
Rather I should listen, they insisted, that I follow their suggestion
And hasten by posting them where they deserve without any objection.

May the musings be of some benefit, entertainment, or serve as a short healthy distraction
I hope there is some guidance in them, some kind of illumination and self-instruction
With the words flowing softly and I hope and pray far from ostentation and affectation
To emphasize that no matter what, we must never lose hope or give up an aspiration
Let’s walk humbly with confidence firmly flanked by faith and relentless determination
Finally at the end of these casual personal ruminations which were not planned for propagation
But may end up somehow either posted on a web site or any other media of communication
Let me send my greetings and regards and good wishes and heart-felt congratulation
On the farewell of this year and its transition
Hopefully to a new and a better one and upon every splendid occasion
That may you all have a happy and prosperous new year in conclusion.