Untie The Knot In Your Life 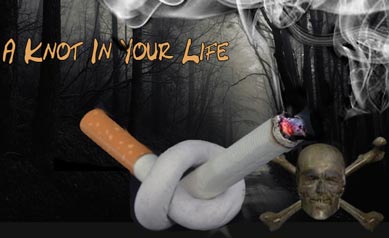 Today’s edition is very personal. I am celebrating my 87th cigarette-free day. Three-months of detoxification and I am treating myself to a cup of tea, not in the usual open air, but inside the shop. Over the years I got used to sitting outside, come rain or shine, because I liked what I thought was my freedom to light up a cigarette, puff and make smoke circles in the air, if a nosy old lady didn’t come to chastise me for smoking. I am not being sexist here, because for every man who complained about my smoking, nine old women did so. Most of the time I acted dumb, or pretended not to understand English. They got tired and left me alone. And every smoker knows that once you go over such an annoyance, your mood is spoiled for the rest of the day. Surprisingly, as if you can remedy your spoiled mood, and thinking you can, you smoke four sticks in less than an hour, a sort of a revenge.

I knew it when people from a distance walked towards me; I knew they were going to berate me for allegedly being disturbed by my cigarette whiff, even in an open air, an open space as big as a football stadium. But they have to complain, it makes them feel good, it is their hobby. They never miss an opportunity to lecture smokers about the evils of smoking; in fact, they are so annoying their lectures make one smoke even more.

Incidentally, there is someone I spurned for many years because he wouldn’t stop his monotonous lectures—he somehow appears in front of me seconds after I light up. Then he throws his hands in the air, just like a disappointed parent, wondering why I was still smoking, and exclaim: “Hjji kha’a shigara, still smoking!” I can’t remember how many times he did that to me. I would be surprised if annoying me was not on top of his To-do List. In frustration I would light up another one and ignore him, but still he would start part two and three of his unsolicited lectures. Surely, in the process, he spoils my mood and I have to light up once more.

Eventually I decided to bring the issue to an end; I told him that I befriended the cigarette well before I knew he existed, decades before I was introduced to him one unfortunate afternoon in a social gathering. I snapped, “Get off my back? Don’t talk to me if you don’t have any other subject except lecturing me about cigarette smoking.”

But it was even worse at home.

The moment I get home, my family, particularly my wife, would make faces, block her nose and open the windows. Every morning she would open my closet in a visibly reactive way to aerate the clothes. My coats and jackets would always be exposed to the sun, outside, because they stink. And I never believed her, I thought she was exaggerating. But now that my smelling sense is revived, and my nostrils are unclogged, I know better: when I meet smokers and hug them, the odor suffocates me.

Almost two years ago I befriended a Chinese man whom I met at the Starbucks “joint” that I frequent. Whenever we met we used to sip coffee, smoke, and chat—of course, loudly, I have to follow suit. The last time I met him I couldn’t stand him—he was engulfed by a fetid odor, even his handshake left my hands smelling foul.

A few weeks ago we were invited for lunch at a relative’s house, and later on the host went out to smoke. When he returned, he brought an invisible cloud of stink into the room. It was worse than the nasty smell on my hands after the handshake. Did I smell that bad all those years? Were non-smokers suffering of that and subdued their disgust just to be nice to me? I am sure they were.

You see, all those who lecture smokers about quitting are doing it the wrong way. Instead of talking about the heart and the lungs (pretending to be doctors), they should just spell it out: YOU STINK! I have a feeling that would be very effective.

Many years ago when I lived in the Middle East, the company I worked for sponsored a traffic police educational campaign against speeding. I met the managers of the campaign; the slogans and messages of the campaign sounded boring to me. The usual, “Speed Kills”, “Your children are waiting for you”, “Speeding saves minutes, but is a risk to your life.” The officer in charge asked my suggested alternative messages. I floated four slogans: “speeding drivers are undiscovered murderers!” “If you are stupid, break the legal speed limit!” “Do your children know you are a reckless driver?” “The horsepower belongs to the car, not you!” “If you speed, you’re a weakling!” Only the creative director of the ad agency was attentive, the rest looked at me in a strange way.

The officer in charge of the campaign just laughed at me and said, “we can’t insult drivers!” I tried to convince him that my suggestions were unorthodox and they have a shock value. The creative director supported my views, but backed down, fearing he might get fired. Of course I failed and the usual run of the mill slogans were adopted for the expensive campaign. As you can imagine, the campaign didn’t decrease road accidents, but my suggestions haunted me as jokes. Officers would smile and mockingly ask me, “Saleh, how many horsepower do you have?”

Try to be blunt…

If you want to help someone stop smoking, tell them as it is. Tell them you can’t stay closer to them because: “I don’t want my clothes to be contaminated with your cigarette odor.” That would be more effective than an empty lecture.

Yet, I apologize for being the typical convert, I am just being true to the spirit of a new convert and loyal to the thumb rule: I have to be an annoying anti-smoking zealot though I will try to ameliorate that by listing the benefits that I gained by quitting smoking:

It’s worth mentioning that there are always challenges ahead, unexpected challenges. About two weeks ago I went out for a stroll. On the way I passed a man sitting on the side of the walking trail in an ultimate indulgence with a cigarette—I had a strong urge and felt like asking him for a cigarette. At that point I was so weak and almost broke my vows never to smoke again. I got closer and greeted him. He smiled and said, “I saw you walking a few times, I tried walking but I can’t unless I stop smoking.” I nodded, “I have been there…” and I told him everything that you have read so far—I felt successful when he threw the butt and started to walk with me. Yeah, I am glad I didn’t lecture him, I just told him a story!

For those of you who smoke, though I have taken lectures from people I know and people I don’t know, and though I was bored, and though an old man riding in the passenger seat once opened his window and made wild gestures at me while I stopped at a traffic light, and when I didn’t hear him, he threw a paper cup at my window to get my attention, and then to convince me to stop smoking he pointed to the pipes that were inserted in his throat, and waved the microphone he uses to talk through, obviously warning me of emphysema and spoiling the rest of my day, I will not lecture you at all. Never!

As I have disclosed a few paragraphs earlier, I am a Convert, and to see the proof to that, please read my views which are in an article entitled Smoking At Airport Colonies, from September 2013. It’s almost three years ago! Here, I should repeat the Tigrinya wisdom; melebemi aygberka melebemi ay ‘yekhlaaka: May you learn from a bad example, and not be one.

It’s now the time for the real “finally.”

Finally, I have to admit one thing: I wholeheartedly encourage you to smoke even more, waste more of your money, burn them, literally. Make sure your clothes and breath always stink. Cough hard and loud every now and then, don’t swallow the heavy greenish-brownish stuff that looks like engine oil, spit it out. Pretend you are not feeling like crying when you have to climb three floors of a building, instead, pretend your leg is hurting (of course you can’t say you are out of breath, it’s embarrassing) when children ask you to play with them in the park. Live your life outdoors because you can’t smoke indoors, almost anywhere now—except in Africa, the Middle East, and Asia. Please do befriend smokers in coffee shops, middle easterners, Africans, and Asians, specially Chinese who would make you feel ashamed when you discover you don’t smoke half as much as they do, though you thought you were a heavy smoker. Light up every time you hear a sad, outrageous news from home. Light up whenever you remember you cannot visit your home because a brute is ruling the country. Light up whenever you remember a loved one who is jailed or disappeared. Light up whenever a young person is forced to leave his country. Light up whenever you remember Isaias, the monstrous, the cruelest, the meanest, the most brutal person who ever breathed an Eritrean air. And you think you can quit smoking? I guess you are enjoying all of that, why should you give up smoking? Why would you “Untie The Knot In Your Life*”?

*Over twenty years ago, I saw an anti-smoking poster with a caption, “The Knot In Your Life” in a creative campaign presentation. I remember it was designed by an Australian ad agency—though I am sure I have the magazine clip of the ad, I couldn’t locate it.  The image above is a similar purchased image reproduced in a collage.

1. Smoking At Airport Colonies
2. The Prayers Of Good People