Eritreans from diverse political background converged from five continents to Addis – a transit to Hawassa, the capital city of the Southern Kelil (federal state) – and yes the designated site of our congress. According to Wikipedia, the Southern federal state has 45 indigenous ethnic groups [nations, nationalities, peoples (ahzab)] living in harmony. The town is 4 hours drive from Addis, and is located at the center of the agricultural area on the bank of the Hawassa Lake, which is a growing tourist resort.

Indeed, my voice choked up and my eyes welled with tears as I recounted the exchange of diverse Eritreans who came to convene their historical congress. I have witnessed Eritreans of all cultures greeting each other both with love and real sense of purpose, trying not to sink beneath their anguish. Vividly, it was a feeling that wipes the slate clean for the upcoming new engagement. This was the first time I ever saw a large gathering of its kind. Now and for generations, Hawassa will be remembered and will have its place in the annals of Eritrean history, where our citizens of goodwill have assembled to conduct their congress for a democratic change. The past decade was sour-faced and postulant, tragic and trying, but here we are, one week into the new decade of our struggle, a sober (well balanced) beginning and a hope to the oppressed Eritrean people.

For me, I foresaw the journey for multiple purposes (a) to represent my constituents and work with the participants of the congress to transform the current struggle (b) to make a first hand study to the issue of Afar and Kunama movements and separate myself from the role of the distant arm-chair-judge (c) to evaluate the policy of the Ethiopian government on issues of peaceful co-existence, mutual respect, and peace and stability of the region. The journey opened the process of truth seeking, at least for myself if not for the entire participants of the national congress.

To begin with, the national congress has ensured noticeably (a) the continuation of the healing process that has started at the national conference in 2010 (b) the formulation of new political supra-structure and infra-structure that allows the transformation of the opposition camp, including both EDA and civic organizations (c) the creation of a space for the transformation of the political organizations – a transformation that includes the process of merging and internal restructuring to parties. The process of healing and trust building is in it self a long process that demands a continued engagement. It is a building process that clears way to a national reconciliation. In short there is no healing without trust building and vise versa.

Despite all the shortcomings and the political glitches that happened in the process, the national congress was a resounding success that ushered in hope and challenges. Hope, because it opens new season and new spirit of broader engagement. Challenges because (a) it calls for a united resistance against the regime in which we utterly failed to make it happen in the last decade (b) It carries the right spices of fear to stimulate new thinking without lapsing into those old habits. 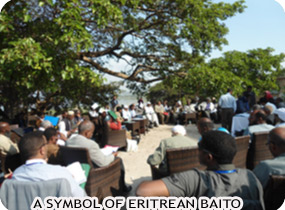 Awareness becomes the first step to make a change and we start out with the best intentions to think and speak positive thoughts without being stuck into old patterns of negativity.  Some choose negativity because it is familiar to them and feel safe in doing that. However, subtly representing the power of being positive and taking the option not to participate in negativity, we found a way to influence the situation in positive direction.  In any case, I give full credit to the commission who bore the heavy responsibilities that have been entrusted on them, to promote the struggle to this level of coordination and structural transformation.

Now there is a structural change; with that we expect the transformation of the organizations in the process to ensure that the visions of today are not the echoes of the past. The “National Assembly” assumed the leadership as “The People’s Power” with its executive body to implement the provisions in the “Roadmap” and the “Charter” that has passed and approved at the National Congress.

Poking the Eyes of Skeptics

A lot has been said against the Kunama and Afar movement as well as to the policy of Ethiopian government; and in fact all are unfounded accusations and subjective perceptional judgments. In my view, good politicians are not content to rely on their perceptions, rather if they have perceptions, they are eager to test them by exposing those perceptions with rigorous engagement to discuss the descriptive and normative limits of their perceptions, based on logic and context with their counterpart. Unfortunately too many of our politicians have no objective judgments that is based on facts and first hand source of information. Often times, they don’t have discipline of questioning when they have encountered with political statements. Instead, they rush to scoff and disprove before they understand the whole context of the statement and its meaning.

The political principle of “self-determination up to secession” in the political document of Afar and Kunama movement is exploited by those who believe on “centralize unitary government.” The principle of self-determination up to secession is not only applicable to nations who are capable to administer politically and economically themselves, but also it serves “as antidote to any unbridled desire of controlling the fate of the minorities.” Having in mind the understanding of the aforementioned concept, I was determined to know first hand from the advocators of the principle of self-determination up to secession. I believe “secession” and “ethnic-based federation” have no validity in the socio-political reality of Eritrea while I believe on equitable rights to our minorities. With this believe, I met the leaders of these two organizations separately to know the realistically convertible rights to solve their grievances.

Interestingly enough, I found their demand is limited to “political and administrative rule” with the fiscal governmental budget comes from the center. In other words they are advocating for decentralized governance that allows them to have regional autonomy. I further asked them on how power should be devolved in their view? Generally, they don’t have issue on the old administrative-units (provinces). Therefore they agreed that the political-administrative power could be devolved from the center to the periphery taking the provinces as units of administrative-rule. Such administrative rule will allow them to freely worship their own religion and observe their own cultural traditions on the one hand and elect their own local leaders as part of their political exercise on the other. Hence, Eritrean provinces will be an integral layer of the nation’s governmental system – “provinces as level of government” and are defined by their geographical boundaries and particular power of administrative-rule. The central government will have exclusive jurisdiction in areas of public policy that includes foreign affairs, national defense, criminal and civil law, health, social service, trade and communications.

On the issue of how they will be represented to the central government, they hinted to advocate for bicameral legislative, one by “equal representation” and the other by “proportional representations.” I found their arguments are not contrarian to the principles that hold Eritrean identity and integrity. Now the skeptics must make their own first hand study before they make unnecessary blunders that affect the process of trust building. What is skeptic by the way?

Skepticism is the questioning attitudes towards facts and statements or some degree of doubts regarding claims. Despite the fact that the Ethiopian government has stated its intention unequivocally on policy of peaceful co-existence, on peace and stability, on mutual relationship with Eritrea, it hasn’t welcomed by some sections of our society in the Diaspora. For sure, we can’t live on doubts of past history. We can make a new history based on mutual respect for the benefit of the two brotherly people. Indeed, the focus of engagement should be to find mutually acceptable solutions to a common challenge. So what are the facts in front of us?

Ethiopia now is the host of a large number of Eritrean refugees. Ethiopia now has opened the doors of higher educational institutions to our young. Ethiopia has allowed the freedom of movement to Eritreans who can compete in the job market. These facts indicate that the Ethiopian government is adhering on trust-building by which the two people will face the common challenge in the near future.

Recognizing these developments in the relationship of the two brotherly people, the National Assembly for democratic change has met with Prime Minister Meles Zenawi to safeguard the purposes and principles of good neighborliness. The Assembly has every confidence to usher a new relationship based on mutual respect. At the end of the meeting the National Assembly asked the Prime Minister every possible question that could be raised by skeptics. And yes, all the answers have met to the satisfaction of the Assembly.

The rush and the scramble of our failure are over now. It is time to reap what is sown in the National Congress. It is a new beginning, another shot at getting it right and planting ourselves on ground of trust, hope, and optimism. So let us forget about the past. Let us forget about all the times we were misled by our leaders, disappointed, and screwed over. The peaks and valleys won’t be quite as vertiginous as the last decade. We have slogged through the worst of it, and we have survived from the decade of hell. We all need a stretch, a purpose, and meaning to work together which is a powerful catalyst for positive change.

Because the route we are in involves appreciative dialogue, it will help us to map the challenges closely, encourage leaders to adapt and build positive habits, and see new horizon as we move forward. Surely, this is the beginning of a new stage in the Eritrean resistance movement, in which the cutting age becomes active resistance. Let us view our struggle as a friend sent to sharpen our skills, and then we will become the masters of our own destiny. As our allies work together with us to lift energy around us, we will be amazed to see how quickly positive pull begins to draw people into this orbit, freeing one mind after the other from negativity into light. Therefore, I am taking a special pleasure and urge you to join the National Assembly and make the necessary effort to strengthen the resistance movement.