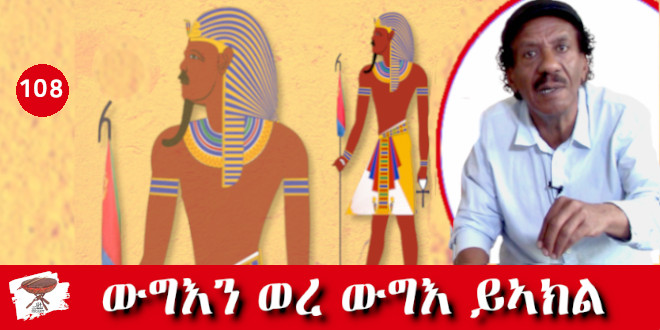 My call for participation from the friends of Negarit is very encouraging. I got a few worthy comments and feedback. They are gems. Imagine if we share all that we know? I am encouraged and I will not stop reminding you to share your knowledge. Thank you and keep them coming.Oh! Before I forget. I must be fair, a person named Yosef  S. Ande who reprimanded me as follows:

I will reply to Yosef later, please wait for it. Now let’s go to “Were W’gg’e” the calls for war.

The memories of the period just before the Baddme war is vivid in my memory. Naively I thought I would prevent the mayhem, but the noise of the warmongers proved to be more effective than my voice and the other voices few that abhorred bloodshed. There are preventable wars, and others that are unavoidable. The 1998-2000 Baddme war was avoidable and unnecessary. It was clear that any outcome will not yield even a fraction of what they wasted, rather, gambled with. To the people who agitated for the war, played patriots by risking the lives of innocent youth, it is just a faint memory that (maybe) they are ashamed of. Yet, they try to cover their shame by boasting of sovereignty, pride, and other jingoist slogans to justify their despicable positions. In that war, the tissue papers were an important tool of the remote war they fought from their comfort in the West. This is how it went.

Another asks, “Where are the airplanes?”

“They will come later on, here…one from the east another from the west and yet another will  fly around the battleground and attack the enemy from the south… and bomb them.”

“No, it is just has a wide wing, it’s a Stealth… invisible and fast, our forces have them.”

See, many people acted like generals leading a war. I remember an officer under the derg rule who was so good at drawing battleground formations. He wanted to hide his past by acting more patriotic than every other Eritrea. He is disillusioned but wouldn’t say a word about his agitational past.

Then came the day when the PFDJ held small meeting where they read the names of the martyrs to a congregation of anxious parents and family. They claimed, “the women ululated whenever the names of their killed children were announced.” A VoA reporter told the world a different story. He recorded the natural wailing reaction of the mothers who lost their husbands, brothers or children. They arrested the  VoA reporter.

The pain was even more nuanced when awate.com published the names of the martyrs who died in the battle, around 16,800 names. Some leaders of the PFDJ asked for an assessment of the entire war. They arrested and threw them in jail, to this day. But the agitators of the Baddme war switched mission, they encouraged their government to arrest more. Of course, the PFDJ had promised it will occupy Mekelle and finish off the Weyane in no time. It didn’t. And it knew the reason why. The defeatists were the culprits who prevented the PFDJ from recording the glories! The agitators bought into that. They believe anything the PFDJ tells them and obey the propaganda that comes with marching orders. Twenty years on, we are still at it—agitating for war.

I was listening to an interview that my colleague Yoel made with Daniel, a veteran of the Baddme war. All of that was preventable. Daniel’s colleagues would have been living among us if not for the foolish leaders of the two sides. They didn’t save  lives; they wasted it. Worse, they are at it again; they want to take the region through yet another cycle of violence, death and destruction. But this time the war will not be limited to a village like Baddme, a town contained within a limited area. It could spread like wildfire consuming everything on its way while the region is still coping with the destructive and painful repercussions of the Baddme war. And that is smaller to what might result from the current battles. I beg those who didn’t listen to the voice of reason during the Baddme war, to summon any bit of reason, and compassion and respect for human life they might have in them, to stop the agitation and pressure for a peaceful resolution of the foolish confrontation. No political power or partisan pride can justify the death of innocent people. Stop gambling with the lives of people. Stop playing with peoples’ emotions. Stop driving the people to their demise. Have mercy. Have a little mercy. At the end of the day, those of you who are agitating from the Diaspora will still be safe in your comfort homes, with your children, career, and family. And you will not suffer from the war… a generation some foolish people did what you are doing now. They are still alive, comfortable, and safe.

Moreover, the leaders they cheered to send the youth to their death, are safe and planning for another round of war. They have forgotten those whose life were cut short; and they are responsible for their death. Only their mothers, their father, siblings and friends remember them, not the cheering crowds. To the agitators they are simply numbers, toy soldiers whose lives can whimsically gamble with. Have mercy. Don’t repeat the mistake (the crime rather) that your elders committed a generation earlier. And now, some of the vocal cheerleaders are silent though I am sure their conscience is hurting. Do you want to live with a hurting conscience? Be careful not to practice what an Eritrean saying warns against: zey snnekha Hutsa qorTimelu, using the teeth of others to chew sand.

I didn’t forget, I said I will reply to Yosef in the beginning—here is my reply…

Okay Yosef, I will “stop none sense talking about” your president but after a mythology, a story/ But first I will give you an advice. And will tell you [including my audience] about a new word I am trying to coin, and I suggest you mummify your “dear Brezidenti.” After all, he is a walking mummy. Now I will tell you the mythology of Osiris, his sister and wife, Isis, their son Horus, their brother Seth and his sister/wife Nephthys. I will also tell you about Anubis, the embalming god “nay mHennaT amlakh” who escorted the kings to the afterworld, which the ancient Egyptians called the underworld. Anubis mummified the kings.

Osiris was a king and Isis was the queen. Seth was jealous and wanted to usurp his brother’s throne. He killed him and his body was cut into pieces and spread all over Egypt. Isis was sad and her sister Nephthys helped her search and collect the pieces of Osiris. Then she breathed life into him, and they mated. Horus was a product of that event. Later Anubis mummified Osiris.

Anubis escorts the dead to the underworld where 42 gods hold a consul to pass judgement on the dead. They take the heart of the mummified king/god/whatever they are and weigh it on a scale against a feather and based on which is heavier, they decide if the person goes to the equivalent of what we know as heaven if his good deeds outweigh his bad deeds, or to hell if the result is the opposite. WE need Anubis to help us with the entire process.

Dear Yosef, please ask your Brezidenti the following: tell him that a certain Saleh, who loves and admires you, want to know why he is excited to visit graduation ceremonies in Ethiopia, like the recent one in Jimma, but never presided in any graduation ceremony in Eritrea. Just ask him that and if he tells you the reason, I will be satisfied even if you don’t tell me what he said, I can guess correctly.

Finally, I see Eritreans blaming themselves for their predicament, don’t, at least not all of you. The responsible are the cult members who keep feeding the PFDJ with the energy it needs– foot-soldiering, propaganda, and attacking the justice camp to weaken its struggle to end oppression. I have no doubt they someday they will wake up but by the time they do, sleep walking towards destruction, they will pull the country down with them. We must stop that. They are unreasonable; let’s be reasonable. They are selfish; let’s shun selfishness; they have little regard for freedom; let’s keep the torch of freedom bright. They are unjust and cruel; let’s be just and compassionate. To them our people are gebbar, serfs. Let’s tell them that Eritrea is defined by its resilient and decent people; they will keep telling us our country is a private ranch of their capo and his cult. At the end, freedom will reign. The nightmare we have been going on for decades will end. And it will be dawn again. It has to. That is when many of the agitators will be exposed to the bone, together with the narrow-minded regionalists, tribalists, hypocrites and bigots. Glory to all Eritreans who genuinely love their people and their country. Our hearts are with all oppressed people.