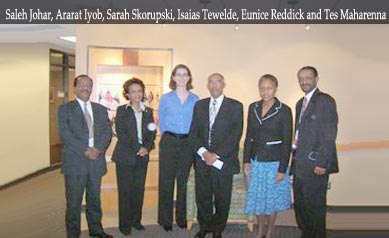 On Wednesday, March 29th 2006, the Eritrean Anti-Tyranny Global Solidarity 1, a task force composed of 15 associations, media outlets and human rights advocacy groups, submitted a petition 2 signed by 4,781 Eritreans and friends of Eritrea to the government of the United States.

Similar petitions are simultaneously in the process of being submitted to the governments of Canada, the member states of the European Union, Japan and Australia. The signers and organizers are petitioning the governments of the above-mentioned states for the following actions:

• A ban on entry visas to all Isaias regime officials who seek to travel to Western nations;
• Curtailing the regime’s ability to raise funds in foreign countries;
• Stopping its covert and overt international commercial, banking and other enterprises.
• Assist in lifting the campaign of intimidation the Isaias regime imposes on Eritreans living in the Western nations.

Despite the threats directed by the government of Eritrea and its agents, the petition, which was conducted between January 25, 2006 and February 21, 2006, was signed by Eritreans and friends of Eritrea in many parts of the world.

The fact that nearly 5000 Eritreans have signed a petition within five short weeks and without much promotion; and that nearly 500 Eritreans in Eritrea risked jail terms and disappearances should inform the addressees that the government of Eritrea is held in very low regard by ordinary citizens.

The Solidarity thanks all Eritreans and

friends of Eritrea who lent their names for a worthy goal—that of peacefully pressuring the government of Eritrea to extend basic human rights to its citizens.

2 For the letter to which the petitioners signed, please refer to
link will be updated