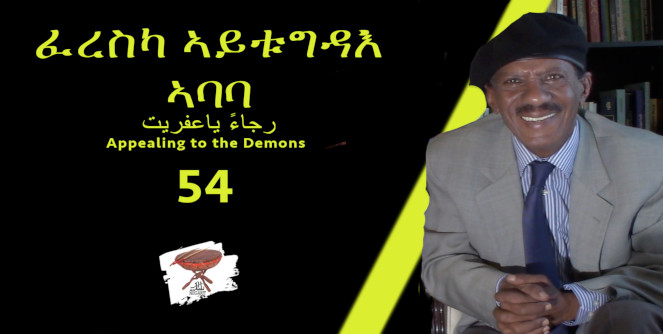 This is written as notes for Episode 54 of NEGARIT, my YouTube channel which is delivered in Tigrinya—it’s not all a transcript by represents the main points discussed.  I hope you enjoy it….

Last week I listened to an interview Semere Beyene of SBS conducted with Amanuel Sahle who explained his previous statements. I think he needs to do more. But I found Memhir Kidanemariam to be progressive and has a clearer view.

I always mention the meaningless ancient rivalry that the elite of the two Tigrinya speaking people straddling the border has been locked into for centuries. And I have fought against it as much as I can. My goal is to contribute even a tiny bit towards ending it. But to do that, I have shunned all lip-service and tried to expose the root causes that many gloss over—it has cost me a lot—a lot. Sadly, many entrenched chauvinists consider me their enemy because they want that rivalry to continue, they cannot live without it. Now they accuse me of being against the unity of the two people.

I want the chauvinists to remember I had a strong position against the 1991 border war, long before they come out of under their mothers’ skirts where they were hiding. And that position made me stateless.

TPLF and PFDJ acting as the sole beneficiaries of the relative peace between 1991-1998, they fought that war whose aftermath is still crippling the region. I have delivered tens of speeches and articles in that regard, even the late Melez Zenbawi who read my speech on awate.com, once remarked to me: “you made a compelling argument”. I have written a long article on “Discourse” which was translated into Amharic and read on Sheger Radio by the renowned Ato Tefferi Alemu. I have written tens of article on the topic at great cost to myself to the extent that many liberally taunted me as a “Weyane Lackey”.

Due to my stand I was, stripped of my Ethiopian passport and denied an Eritrean passport. I lost my job, I was made stateless and couldn’t send my children to school. The “wahio” in Kuwait used to deflate my car tires and place whiskey bottles on the car roof to implicate me in a place where punishment for alcohol possession could be severe. I was lucky I didn’t get in trouble for that. The rumor mill spread wide and narrow in Kuwait, “Saleh is stating Badme is Ethiopian,” etc.  A woman I liked, where we used to spend weekends having coffee with said to me, “why Saleh! Why do you say Badme is not Eritrea?”

I went through a lot, but I never gave up my principled position. The thing that angered the PFDJ, was that I wrote on Dehai calling for an the end to the war, if not they should remember sooner or later , they will sit on a table and sign a peace agreement. And when that happens, I volunteered to provide a tablecloth. I also said, the Eritrean Titanic is going on a risky path and the captain is drilling a hole in its hull, I wish the electricity stops before he does more damage.

Such statements angered the PFDJ lots. On the Ethiopian side, another “wahio” led a campaign to strip me of my passport—he once told me Eritrean soldiers robbed Tigraian women of their underpants and their golden teeth! I mocked him in front of others, ‘who wants a dirty, smelly under-pant, and how many people who have golden teeth do you know!’

Two governments targeted me. I promised I will defeat both of them. I did. I made it to the land of the free, the home of the brave. I was free and I never stopped trying to be brave. So, no one can lecture me on peaceful coexistence between Eritreans and Tigraians in particular, and Ethiopians and the entire region in general.

However, I do not condone an exclusive, sectional peace; I believe it should to be an all encompassing peace that benefits everybody, not only the powerful, their affiliates and the people with guns. Unfortunately, that foolish rivalry is kept alive by the most determined anti-peace, anti-secularism, and primitive people.

I   will not allow anyone to try to overbid me regarding the promotion of peace between the two Tigrinya speakers straddling the Eritrean-Ethiopian border and spoiling it for the rest of the people. Sadly, the elite of the two Tigrinya speaking people are still locked in a rivalry that Ras Weldemicael and Alula didn’t finish over a century ago. Alula defeated Weldemichael in a few battles and finally “betrayed him”— that narration runs deep in the psyche of some Eritreans—the rest of Eritreans do not even know who the two were.

Today, after so many years of never-ending rivalry, another chauvinist group transformed into fascists is keeping the feud alive. The fascists cover their movements with ancient terminologies and linguistic camouflage, but it is the same Tewahdo-centric policy that victimized many people.That should foolishness should have run its course and I wish they would look forward instead of insisting on staying bogged down by the centuries old rivalry—the region is suffering from their meaningless petty egoistic squabbles! Bravado doesn’t help.

Going back to the fascists, I hope the following will penetrate their thick skulls.

1. Tigrinya speakers do not mean Tewahdo Christians only.

2. Eritreans do not mean Tigrinya speakers only.

The fascists cannot see, but a particular section of Eritrea, and therefore, they are chauvinists of the first grade, exclusionists, and fanatics who do not mind taking the region back a thousand years to achieve their hegemonic aspiration. To them, it is all about hegemony.

What needs to be done?

The PFDJ (Eritrea) and TPLF (Tigrai) governments are as a silent as a cold rock. They’re no where to be seen because the confusion serves their goals very well. The officials never made a remark, never took a decision, but are continuing their partisan hegemonic projects, erasing the symbols that make Eritrea, the Eritrea its nationals recognize.

The Tigrai government, I suspect, is manipulating the situation to its interest, to weaken the PFDJ using tactics that will certainly backfire and end up weakening Eritrea and Tigrai. Just like the PFDJ, the TPLF hasn’t made a statement to fight the destructive fascist moves happening under their noses in Mekelle. Both parties use the same tactics at the expense of the interest of the region and beyond.

Until recently I believed both systems, in-spite of their flaws, were secularists. Now I have concluded the PFDJ has transformed itself into another religion, and the TPLF seems to be under the grip of primordial sectarian influences. Otherwise, how could they both be silent?

I believe any genocidal project is legitimate. How could governments keep silent when groups are contemplating to commit genocide on an entire people, to expel entire people from their abode? How could any respectable government simply watch silently as hate and violence is being spread and promoted?

I believed and still believe that any peace proposal should be seen from the national perspective—Ethiopia and Eritrea. It’s should be judged based on universal values of human rights, respect of citizenship, and rejection of bloodshed and violence in general. It is a crime we cannot afford to ignore. The interest of citizens’ peace, economic wellbeing, and political stability, and justice cannot be downplayed.

But unfortunately, the Southern border is where the problems are. Deal with it, both so-called Tigrinya speakers and to a lesser extent, Amharinya speakers. Progressive intellectuals should take the lead because the topic cannot be left to medieval minded pseudo-intellectuals.

Racists, extremists, and fanatics, should be confronted with determination.

In Tigrai, I wish to see a region governed by a secular system. Unfortunately, Tigrai (and Ethiopia to a lesser extent) has not been truly secular. The clergy should be pushed out from the political and governing realm and be limited to the church, to attend to the spiritual needs of the people–It’s hard to imagine any enlightenment in a religious institution by the clergy.

So, all those who repeat cheap slogans of secularism and justice, must stop their noisy screams and for a change, practice it and behave like secularists.

As for Eritreans, we have a tougher task of removing the regime that has brought us to this juncture so that we can usher a true, democratic, secular system in a nation that respects and values its citizens. My main wish is to see justice established in our beloved homeland.