Mr. President: What Do You Say To My Child?

Posted on February 7, 2017 by Mahmud Saleh in Articles 44 Comments 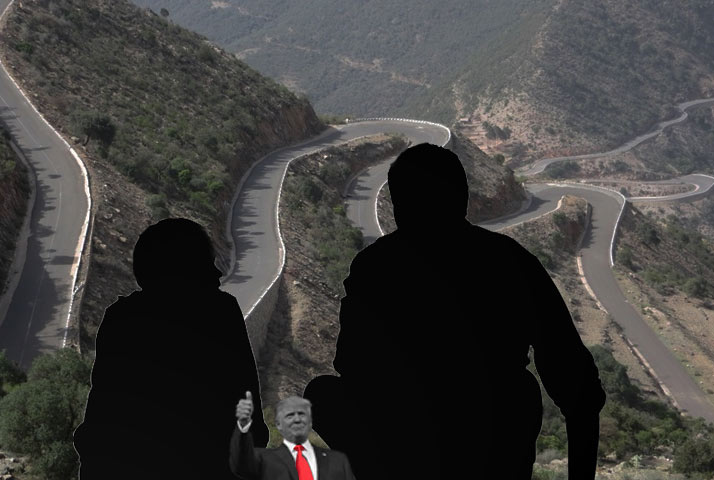 Finally, we have got lots of snow. Thanks God, at least we can join those who talk about winter. For now, nature has replaced the snowflakes of President Trump’s impulsive and erratic behavior of “governing through twitter” style, and his barrage of executive orders. On the other hand, we have seen the good value of America triumphing over Trump’s bad order that banned Muslims from some countries to enter the USA legally. An Honorable Federal Judge, who was appointed by President George W Bush ordered a temporary halt to Mr. Trump’s executive order. Now, legal immigrants are literally pouring into the country, but they are LEGAL.

With the bigotry and filthy-mouthing coming out from the President and his small circle, targeting minorities and Muslims, immigrant families are finding it challenging to explain to their children how America has changed overnight.  Particularly, when you are a parent of black and Muslim children, it’s a double jeopardy. Our children are going through a tough time. The first casualty of the hatemongering onslaught on Muslims and other “bad people” coming from the White House (really, a white house sheltering dark demons and their sick ideologies) are not the “very…very bad” immigrants but our children who are born here in the United States of America. They are asking, “Why is the President so callous?” The old ones are comparing him with President Bush who did a magnanimous job when he stood up for all Americans after the 9/11 attack.

So, how do families reassure their children during this trying time? Last night’s heavy snow (by the standard of the North West) gave us an opportunity to huddle together and talk over this issue. My 12 year-old son thought that Mr. Trump sucks, and added that the President was not cool enough to be the president of the USA. My 14 year-old joined and said that the President needs a hot-line connecting him with President Obama. The rationale being, that President Trump should be given a chance to “make America great again,” while President Obama can help him out in making America great again, “but in a cool way”. Then my 18 year-old took the lead and gave us a lesson on how American political institutions are grounded on firm legal traditions, and that, unless the president reassesses his aspirations vis-à-vis the trajectory of American historic process, sooner or later, he will be in a colliding course with the other two institutions, the legislative and the judiciary branches, and the American public at large, with its media and civic societies. Our son added that, at this moment, the Republican Congress and the President are in a symbiotic relationship. The Republican lawmakers are mostly from traditional conservative pedigree while the President and his close advisers are leaning towards a far-right racist ideological sect. The Republican Congress needs the President for his signature of Republican bills, while the President needs the support of the traditional Republicans for legitimizing his egoistic and narcissistic adventures. And thus the governing by Twitter style begins.

The last person to speak was our oldest son. He said that the democrats made a series of missteps. Firstly, they did not pay attention to white middle-class America that had been hurt by the exodus of manufacturing mills. Secondly, the conservative brand of the Republican Party had been working quietly while democrats were celebrating the election of the first black president. These radical syndicates moved slowly buying rural radio and TV stations. He said that if you drive or stay in hotels across rural America, you watch or listen to mostly conservative talk shows. The democrats failed to reach out to these folks; they were busy advancing environmental, and other domestic agendas of narrow-group interests. They did not make advances in inner city poverty and the spread of drugs and crimes; they were not able to overhaul immigration laws that would matter to the majority of Latino voters. Thirdly, Democrats made a colossal mistake in the way they treated Bernie Sanders in the last primaries. Bernie would certainly have destroyed Trump in many ways.

In style of communication, Bernie was a firebrand who would destroy Trump’s image of “authenticity”. Bernie would compete Trump in image and style, in the sense, that he was a genuine anti-establishment candidate and a rich background of standing for working families. In addition, Bernie, 74, made history by galvanizing many young voters. He would appeal to the same white working families that catapulted Trump to the presidency. Had not it been for the Democratic Party’s unfavorable marginalization of his candidacy and followers, the democrats would have retained the swelling number of the young voters and other working-class folks who must have later switched their allegiance to Trump, thus making possible the improbable victory of the man who was accused to have been disparaging and insulting women, a man who openly and repetitively expressed his intention to treat Muslims and other non-white races in a way not compatible with American motto that we are one out of many; a man who ran on isolating America from its traditional European allies, and major trading partners. Our son concluded by saying, “It was a shock for the nation, and even a greater shock for Muslim communities across the nation and around the world.”

At any rate, how do Muslim families discuss the rhetoric coming from the White House regarding the “very bad people”, a euphemism for Muslims? I think it is prudent that we discuss it in a way our kids are able to separate Trump’s tantrums from the good people of America. We have to discuss with our children the checks and balances built in the system that could restrain our president from getting a really…really bad president, and becoming a solo mad dog. We will have to emphasize the point that the majority of Americans (starting from their neighbors, teachers, and pediatricians…) are good citizens. Explaining that the free media plays an important role in keeping the President and his billionaire-Cabinet in check helps children know that there are forces of good intent allied and aligned with them. If there are local community mass media outlets, they have to take this role seriously. Parents and educators have to discuss qualities of good citizenry. We need to encourage them to become active in civic activities and discourses, because they are the agents of change.

It is imperative that parents emphasize the positive developments, such as the ruling of the good Federal Judge which has put a temporary halt on Trump’s irrational Executive Order that targeted the majority of victims, ostensibly to keep away the few bad guys. It’s also a helpful idea to discuss the demonstrations taking place all over America, and in world, in protest to the tyranny of the Executive Branch. It is reassuring explaining to our children to that they are not alone, besieged by this unusual administration; the current administration does not represent the feeling of the majority of Americans towards the rest of the world; and that there is in fact a sizable opposition to the president and his surrogates’ hateful diatribes. It is vital that parents reach out to the schools to see if and how aware and prepared the teachers and administrators are in this matter.

Although children are resilient, there is no question that they are experiencing a tremendous pressure and psychological adverse effects from the current unhealthy political climate. They will feel targeted by the country they plan to serve. We can offset the adverse effects emanating from the administration’s ill-advised and ill-intended policies by empowering our children to link up with local and national movements that aim to retake our country back from the hooligans and predators who are nurturing their egos by exploiting fears of ill-informed and unsuspecting Americans. We need to invite neighbors, media outlets and local officials to constructive discussions.

If there is any group of people who should fight back the barbaric terrorists, it is the Muslim community. Muslims have been the prime targets of terrorist organizations in countries such as Somalia, Libya, Tunisia, Algeria, Nigeria, Syria, Iraq, Yemen, Afghanistan, Pakistan, and so on. Many victims are fleeing these countries, literally, for their lives; some of them happened to be communities and individuals who had helped American war efforts in those countries.

Ironically, the two countries which should shoulder the responsibility of the growth and spread of radicalism and terrorism are the USA and Saudi Arabia. The USA sow the seeds of the radical brand of terrorism, in the 1980s, in the mountains of Afghanistan, in a bid to halt Soviet expansion to that region. George Bush launched the war on Iraq for “democratizing” the Middle East. We now know how disastrous that war has turned out to be. The Obama administration added Libya, Syria and Yemen (indirectly) to the list of destabilized countries.

The second source of terrorism is Saudi Arabia. Saudi Arabia encourages a brand of Islam called Wahabism that is extremely radical and intolerant. And SA has the means of disseminating and even outsourcing it; it has a community of wealthy financiers who are bent to spreading out their radical interpretation of Islam throughout the world. Most of the 9/11 attackers were from SA, yet it is not included in the list of the countries that are temporarily banned from sending their citizens to the USA legally. Well, that explains why the billionaire-cabinet of Mr. Trump is a tremendous disaster for America. Billionaires respect billionaires.

On the flip-side, Muslim communities in America need to discuss seriously and frankly the spread and threat of radical ideologies. It is real and imminent. The customary statement that Islam is for peace is not good enough. We have to make sure that our communities are not sanctuaries for radical elements. The Muslim community should be at the forefront of cleansing our communities from these radical predators. Today, the internet has made it easy for radicalizing quarters to penetrate communities. The key to defeating radical internet infiltration is sitting with our children and listening to them. Giving them a wider perspective of the ongoing domestic and global struggle is essential.

Moreover, it is important that we make sure that community members understand their rights and obligations within American context. Community resources such as psychologists, educators and legal experts need to step out forward and contribute in teaching their community members on how to fight for their rights, and how to engage if approached by law enforcement agencies.

There is no question that the first victims of the bad policies the Trump administration seems to be making its hallmark are our children. With first immigrant parents who have inadequate knowledge of American civic discourses, coupled with language barriers and cultural constraints, our children are becoming sitting ducks for the salvos of bigotry coming from the same President who should be acting as a role model and caring Executive-in-Chief. Therefore, it is the responsibility of those members of the communities who could navigate the system to help out with the burden our community feels with respect to shielding our children from the poisoning air of hatred. The marriage of efforts of parents, community resources, local officials and media are crucial in helping our children understand the political process and to make them feel secure.