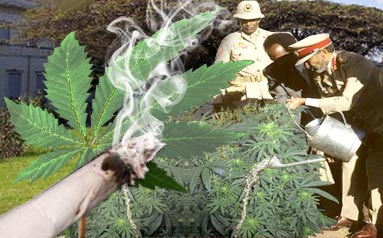 A green, yellow and red headband/wrist band is the symbol of Rastafarians who worship the late feudal king, Haile Sellassie of Ethiopia, whose name (and title) before he was throned was Ras Tefferi.

When King Minelik died in 1913, his grandson Lij Eyassu became the king, but Tefferi didn’t accept that. Three years later Tefferi imprisoned Eyassu in a palace coup and installed Zewditu, Minelik’s daughter as empress of Ethiopia while he made himself the regent. Later, he appointed himself king while Zewditu was still alive. In 1930, when she died, he made himself the emperor of Ethiopia.

After Mussolini’s forces invaded Ethiopia, Haile Sellassie fled the country through Djibouti and went to the UK where he stayed for most of the six years of his exile. He addressed the League of Nations and appealed for help.

On May 1941, Haile Sellassie entered Addis Ababa with the help of the British Imperial forces under the command of General Wingate.

Immediately, Haile Sellassie started to consolidate his power dividing vast lands of the country among his followers and nobility and Ethiopian peasants became more destitute.

In Eritrea, which was federated with Ethiopia by a federal act under the auspices of the UN, Haile Sellassie began to dismantle the federal arrangement. Finally, he abolished the Eritrean government and annexed Eritrea as the fourteenth province of Ethiopia. Thus, a bitter struggle for independence was started by Eritreans which continued until 1991.

Haile Sellassie was overthrown by his own military in 1974.

Rastafarians worship Haile Sellassie; they also worship the cannabis. The picture above shows Haile Sellassie watering a marijuana plant. There is no evidence which shows Haile Sellassie smoked weed. But after looking at this picture of him watering the plant, it is possible he was constantly under the influence when he ordered the eradication of Eritrean villages and the massacre of their inhabitants.