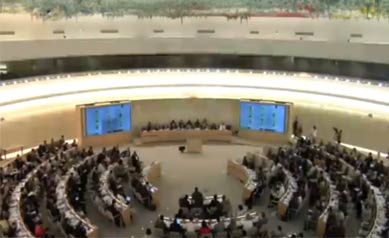 Resolution A/HRC/26/L.6 which was tabled by Somalia at the 2014 Universal Periodic Review (UPR) of Eritrea was adopted by the UNHR in Geneva.

Mr. Yusuf Mohamed Ismail, the head of the Somali delegation who made the introduction to the session stated that, “Since the tabling of the draft resolution, a number of countries from different regions groups have co-sponsored it.”

The resolution for, “'[t]he establishment of a commission of inquiry to investigate all alleged violations of human rights and fundamental freedoms in Eritrea….” was mainly based on the report by Ms. Sheila B. Keetharuth, the UN special rapporteur on Eritrea. It included, “first hand accounts and testimonies.”

The Somali ambassador stated that, “Somalia has been a supporter of Eritreans during their struggle for their self-determination.”

In her latest report Ms. Keetharuth stated that every month 4000 Eritreans flee their country. In Italy, which is the gateway to Europe for many refugees, 32% of the refugees who arrived there are Eritreans.

Syria, which has a population of around 23 million compared to Eritrea’s estimated 3 to 5 million inhabitants, has been going through a devastating civil war for the last three years. But the exact population of Eritrea is unknown since the government never carried an open census since it came to power in 1991.

Though Syria has a population of between four and seven times greater than that of Eritrea, its refugee population in Italy is outnumbered by Eritreans.

According to the statement read by the Somali ambassador, Eritrea was given the chance to respond to allegations leveled against it and to disclose the whereabouts of prisoners and their conditions but it didn’t respond. The violations of Eritrea against its people was feared to amount to, “Crimes against humanity.”

The allegations included a long list of human rights violations by the Eritrean government against its people including disappearance of persons, extra-judicial killings, torture, forced labor, and a host of other equally serious violations.

In defending the record of his government, the ambassador highlighted the, “prevailing harmony, progress, peace and stability of the society” in Eritrea, which is going through, “political, economic and social transformation.”

Concerning the UPR recommendations, the Eritrean ambassador stated that it, “will be integrated [in Eritrea] to drive development in general and human rights in particular.”

Reinforcing his rejection of the resolution, he said that the resolution is, “intended to divert attention of the council and indeed the international community from the just struggle of the Eritrean people against the continued occupation of its sovereign territories, the UN sanctions imposed on Eritrea, and the belligerent stance to destabilize the country.”

He further noted that the resolution is, “based on the biased report of the rapporteur” and as such, “It doesn’t enjoy the support of the concerned state and undermined the UPR process.”

The Eritrean ambassador accused the US by explaining that, “Eritrea has become a target of the US hostilities for geopolitical reasons, it has become apparent that this draft resolution is also part of Ethiopia’s strenuous efforts to maintain the UN sanctions imposed on Eritrea.”

Emphasizing the Ethiopian role in the “fake crisis” that Eritrea is going through, Ambassador Tesfamichael stated that a copy was being passed to the delegates, because he wants to “share with the council and other members states the recently leaked Ethiopian document circulated to its embassies.”

The document in question has been on the Internet since March 2014. It included information issued by the Ethiopian Ministry of Information concerning the UN sanction imposed on Eritrea and was apparently circulated by Tedros Adhanom, the Ethiopian foreign minister, to Ethiopian embassies and consulates around the world.

All members states except China, Pakistan, The Russian Federation and Venezuela voted for the adoption of the resolution.

Mr. Chen Chuandong, the delegate of China stated that his country is, “not in favor of imposing so-called external mechanism of inquiry,” without the consent of the country concerned. While Mr. Aamar Qureshi, the Pakistani delegate, said that “country-specific mandate without the consent of the state concerned is not productive.” But his main objection seemed to be the “duplication [of tasks] specially in a time of financial constrains faced by the OCHR… and additional burden on the council.”

Mr. Andrey Nikiforov, the Russian delegate, stated that his country “does not support this country resolution under item 4 of [the] agenda…[and] consider that human rights matters in any given country should be discussed at the UPR which was set up explicitly for this purpose.”

The last of the four objectors to the resolution, Mr. Félix Peña Ramos of Venezuela, said that his country believes the, “Council should be promoting and protecting human rights on the basis of an authentic dialogue and the basis of cooperation…[and] should involve the country [Eritrea] involved.”

Background
For several years, the UPR [Universal Periodic Review] has been reviewing the human rights situation Eritrea. In 2008, at the request of Human Rights House of Norway, awate.com had the honor of compiling a comprehensive report and leading a coalition that presented the document in Geneva. The delegation that represented awate.com was composed of Mr. Amha Domenico (Europe), Mr. Abdulraziq Kerrar (Australia), Mr. Semere Habtemarian (USA), and Mr. Yassin Mohammed Abdella (Sudan).