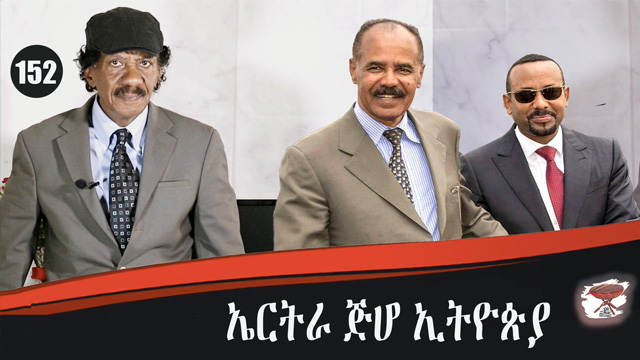 Anyone who went through the miseries and cruelties of the successive Ethiopian occupation (Haile Selassie’s and Mengistu’s) followed by the PFDJ oppression, would never wish for a perpetual rule by similar regimes. In fact, if it was possible, the victims of these regimes wish to erase the painful memories, let alone welcome their reincarnation. But sadly, there is a sadistic fringe of society that always dances to the beat of occupation, oppression, and humiliation.

In the last three years, we have seen frantic attempts to bring back the dark era of occupation by providing more support to the current oppression in Eritrea. It attempts to repeat what it has always been doing, with the same behavior of Andenet (union party), and the servile Militia-Sernay, the hirelings who served different occupational forces for handful of wheat. And that’s the main problem.

Serious social blunders in our history are treated like taboos and remain under the surface. However, that leaves the doors open for the oppressors of the past to get a foothold in Eritrea to repeat the miseries of the past. And that is why I urge the people to keep their memories alive. If memories are erased (or, where empty to begin with), nothing stops the culprits from making bad judgements and race to host the perpetrators of the painful past.

Decent people, albeit unhelpful, avoid discussing the experiences of the past to protect a few overly sensitive people whose feelings are easily hurt, even on the face of truth. For instance, why do many knowledgeable Eritreans avoid discussing the crimes committed by the Eritrean Commandis (Commandos) forces that served the Haile Selassie regime? So far, for decades, the discussion about it is so much feared and avoided to the extent that one would think it never happened.

Sadly, it was real–regardless of whether the members of the Commandis didn’t know any better or were illiterate brutes who were easily deceived to believe what they believed. The shocking reality is, that many of the atrocities of the nineteen-sixties, that hundreds of Eritreans still suffer from its repercussions, were committed by the Commandis: the massacre of Ona, Besekdira, Ona, and the many similar atrocities in Semhar and Akele-Guzai and Seraye and other places. These atrocities were committed by the Ethiopian army, the Eritrean Commandis, and to a lesser extent by the Banda, the militia Sernay.

Of course, there were scores of Commandis soldiers who had a change of heart, joined the liberation struggle, and fell serving the Eritrean cause; no one can discredit their roles and sacrifices. But that doesn’t absolve the Commandis institution.

But why bring the topic now?

We have been witnessing the clones of the Commandis– the same crude and brutal character in addition to their bigoted attitudes roaming everywhere. And through them, the same uncivilized, cruel, and chauvinistic injustices, and oppressing the Eritrean people.

The savages of the past were Eritreans and those behaving like them now are also Eritreans. What changed? Those who were bandits, sellouts, and hirelings, and were serving the occupational forces are now waving the imperial Ethiopian flag, on our faces, and campaigning to take Eritrea back to that era, under the inheritors of the imperial Ethiopian madness. Isn’t it an insult to the intelligence of Eritreans? Why would a supporter of the PFDJ be mad for seeing the original Blue Eritrean flag while waving the Ethiopian flag? Is that even rational? What’s the logic?

Any honest person with a sense of justice understands what I am saying, though it may be disturbing to some who would rather have such topics to stay buried. However, if some people are vane, jingoists, without a cause, without a sense of justice, without the appreciation of freedom, they may try to discredit what I am saying by claiming they are lies. And here I challenge anyone to prove me wrong on my assertion regarding the abhorring incidents I mentioned above.

The act of waving the Ethiopian flag and at the same time undermining the Eritrean flag in the same breath, is infuriating.

In Ethiopia, advocates of the unitary state, the barefoot imperialists of Ethiopia, have made their intentions clear. We have been witnessing it since 1991 and it became worse after Abiy Ahmed came to power. As a first step, Abiy brought back the veterans of the imperialist and the Derg era operatives. He pursued the same strategy of crushing everyone who demands their rights, and his first salvo was directed at Tigray.

As far as I am concerned, the Tigrayans insisted on exercising the rights despite Abiy’s objection, but no just person would find insisting on exercising one’s right as wrong—particularly when you have a prime minister who prophesied his atrocious plans too early and too openly.

There are some Eritreans, and the ruling party, who see the Tigray as having ill-intentions towards Eritrea… and have territorial ambitions. However, it is widely known that the TPLF and PFDJ have been in a long-standing feud. So, why would anyone try to complicate matters more just to prove the TPLF is a mortal enemy of Eritrea? That simmering regional enmity has always been there, maybe since the 19th century; it predates the two ruling parties of Eritrea and Tigray.

But after witnessing what went on during the last year (forget the previous two since Abiy came to power), would anyone invite the imperialists of Ethiopia to Eritrea just because the PFDJ is only focused on destroying the TPLF (and vice-versa)? Of course, if one is a partisan ideologue, it could be the only way out regardless of the risks and outcome.

The ruling party of Eritrea under Isaias Afwerki could have stood at equal distances from both warring sides. But that is against its nature. The rulers can’t because their only declared goal is to crush the TPLF. And what do Eritreans gain from that? Nothing but destruction and chaos.

The risk of opening the doors for the Ethiopian chauvinists, sectarians, superstitious mobs, and foul-mouthed wannabe ethnic cleansers—the types who boast they can walk to Eritrea brushing their teeth, or the ones who boast they will occupy the Red Sea though their non-existent navy forces, is great Worse, the PFDJ’s most senior officials made their intentions clear when they publicly said they are worried about the wellbeing Ethiopia without any concern for the wellbeing of Eritrea.

And we have a bigger problem

The PFDJ has instilled paranoia and anxiety among many of the Eritrean youth. They have lost hope on the betterment of Eritrea, and they find it natural to aspire for a drastic alternative—even by pushing Eritrea into the abiy’s of sectarian, regional and other conflicts. Their solution is based on brinkmanship: if I can’t have it my way, let Eritrea go down the drain. But they forget there are able Eritreans who would not allow that. They will fight with all they have to prevent that from happening. But is that needed? Can’t we stop the stupid rational and logic and try to think like normal people, like mature concerned citizens? We can and I am confident eventually we will.

I feel sorry for the young who are disillusioned and have lost self-confidence in their Eritrean skin. But that’s where perseverance, dedication and steadfast struggle for justice and freedom is required. Rational, composed thinking, and truth, must be the only way to challenge the adversity, not giving up and submitting to despair.

Finally, I have a regret that Eritreans in the circles of power have so far, failed to resolve the pressing social issues. It’s in their hands and they can prevent the risks facing Eritrea just if they stop being brutal egoists for a while. The situation of Eritrea must not be left to the whims and wishes of a few who have shown us, time and gain, their inability in securing a normal Eritrea where its citizens enjoy justice, freedom, and a normal life. And it’s a crime to watch all of that happening without acting to stop it. It’s a shame that will be glued to the history of those who are able to bring about change but didn’t, on the history of those who kept silent despite the calamity they are watching, and on the entire nation.

It’s time that able Eritreans came out to draw clear proposals and policies that Eritrea should follow once the current cycle of conflict and bloodshed ends–trade, security, ports, diplomatic normalization, internal policies, and neighborly coexistence before it’s too late.