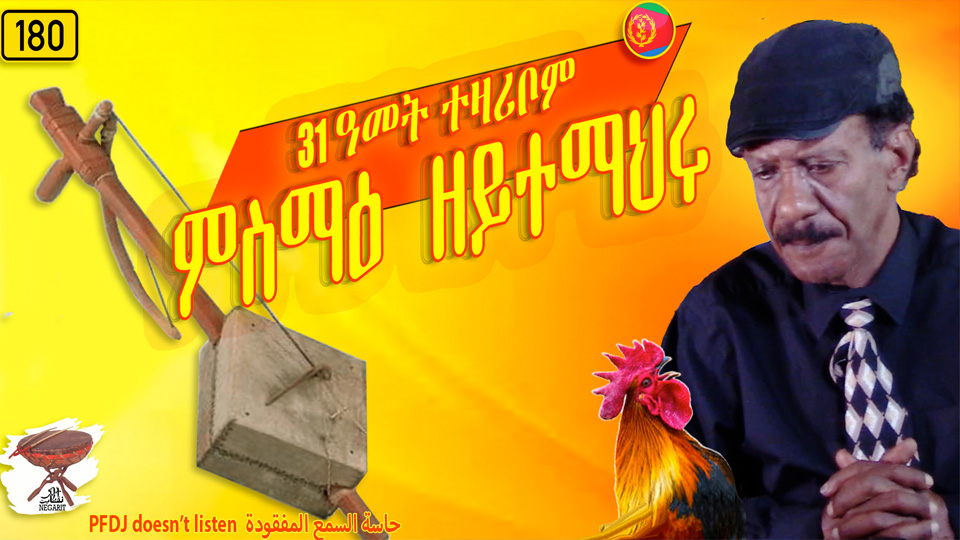 Over the last months, the PFDJ operatives have been complaining that some forces are forcing them to talk back. They seem they were silenced! However, together with their adversaries, they have been talking, the only think they are good at.

I will start with a 12-word quote from a Palestinian poet, the late of Mahmoud Darwish’s poem:

The number of citizens that the PFDJ ruling party refuses to listen to are many, uncountable. And many relentlessly try hoping someday they will clean the wax in their ears and begin to listen. And that is my appeal and my colleagues.

The PFDJ behavior is strange, they talk and yest they pretend they were zipped by some force! They always expropriate the tone of their victims. Very strange. And I am addressing the PFDJ and its supporters.

People are used to your squabbles with you historical rivals, go ahead continue that. But just listen to others. Listen. The rest of your behaviors and injustices are what others are used to.

There is an Eritrean traditional saying, which I am taking the liberty to upgrade for 2022—it doesn’t hurt to repackage a saying.

A cat engaged in monologue is named PFDJ

But there is another group that has adopted a one-word slogan: “I will not listen!” Some do not want to listen and now others want to speak more. It’s the sad fate of Eritreans. But for now, I will focus on the PFDJ.

I encourage them to talk more if that soothes them. Maybe they want us to say more. No change there. But the main problem of Eritreans is your cruel actions to silence them. And we know there is no force that zip the zipper in chief, the PFDJ. Our only wish is that you speak of what ails the beleaguered Eritreans. Praising and cheering the power of the day non-stop is not something you should be proud of. I say this because I remember the story of Mohammed Werdi, the Sudanese singer.

In 1969 Jaafer AlNumeiri overthrew the government and established the rule of the socialist party. Werdi sang praising Nimeiri and one of his popular songs said, Haresna wefarisna (our hero and our guardian). In 1971, the communists led by major Hashim Al Atta overthrew Nimeiri and took power for a short period. They jailed Werdi, but soon he was released. He changed the words of his song to, LaHaresna Welafarisna (neither our hero nor our guardian).

In the meantime, the leader of the coup, Babikir AlNur was flying from London to Khartoum to be installed at the helm of power in Sudan. However, while flying over Libya where Gadhafi, a friend of Nimeiri rule, his plane was intercepted by Gaddafi’s air force landed in Libya. Babikir was detained.

The news about the interception reached Khartoum and Nimeiri’s supports were emboldened. They stormed the prison and freed Numeri, and deposed the communists led by Major Hashim Al Ata. Nimeiri regained his position as president. Again, Werdi was released and resumed singing praises for Nimeiri. Werdi dies in 2008 and his shame awaits the PFDJ-praising crowd.

The second illustration is the experience of Abbe Abdalla, the famous traditional singer who died a few years ago in Sudan where he lived as an exile.

The spies of Haile Selassie bothered Abe, he didn’t feel safe—he left Keren to Asmara where he hoped to find a job. But things were not good in Asmara either. He continued to Addis Ababa where he met crowds chanting against the emperor. Dumbfounded, he stood among the crowds, not shouting against the emperor whose rule was the reason he left Keren. One of the organizers of the demonstration suspected him: why are you not chanting against Haile Selassie. Poor Abe said, I fled from Keren because the police said I was singing against the emperor, and I came a long distance to avoid them. If I said something, maybe you will shoot me! The man smiled and reassured him that the emperor’s injustice has ended, and he had nothing to fear.

Okay, since the PFDJ wants us to speak, I have more to say. I will speak about Idris Mohammed Ali, the famous singer who was arrested in 2005 without charge and to this day no one knows his whereabouts. But first let see a glimpse of our arts and the arts of praising.

Watta is one of our traditional musical instruments and as in any feudal, oppressed society, the Watta players are mainly engaged in the art of praising to make a living. That’s why the noun Watta is synonymous with a hypocrite, an unprincipled speaker whose life is wasted in praising the power of the day. And similarly, able poets are called Hamen, praises without music. So, since the PFDJ refuses to listen, an everything that was said over the years has not penetrated their wax filled eras, I will speak.

I believe that speaking and listening are twins, they go hand in hand. The PFDJ controls all the national media, social and cultural avenues where the influence and brainwashing of the public is carried on. They spread rumors, defamation, threats, and character assassinations. WE will continue speaking hoping they will listen. And if they think they are not speaking enough, they are wrong. It’s the citizens that are zipped by them. And I have one more story, that of Merke, the funny character from Keren of the late 1960s and early 1970s.

He used to roam the town particularly around where Bar Sehit (Bar Sennait for the Italians—it’s now known as Enda Aregay). Merke was a soldier in Sudan and fought against the rebellion of South Sudan. Then when all the Eritrean soldiers started to trek back to Eritrea to join the Eritrean revolution, he came back but preferred to stay in Keren. It was a difficult time of harassment, and he devised a trick—he pretended he was insane.

Every evening, Colonel Welana, the commander of the Ethiopian army and who executed the massacre of Ona and Besekdira used to come to Bar Senhit to entertain himself and his guards spread around the area. Merke used to shout: Enlist to Jebha, Enlist to Shaabia (the two organization that led the Eritrean liberation war). The enraged guards of Welana try to beat him up, but someone will convince them he is mad.

He had a friend in town, a tailor named Saleh Beyyed who was a veteran of the Sudanese army as Merke. I saw him there many times. Once a man asked him how he lost his mind. Merke cursed the man, I am not insane but that is camouflage, I chose to stay alive. Then he recounted his story:

Merke said, while fighting In South Sudan, whenever we gat paid, we flocked to a village near our camp to drink and visit the woman. They would go to the huts where pimps stood, pay, and go in. Merke said, the many people standing in line for one woman disgusted me but I had to go in. However, once in the dark hut, I asked the woman to show me her face. She refused to light the lantern until he promised to pay more. Then she reached to the side, lighted a lantern and showed him her face. Merke said, “she is probably ten or twenty years older than my grandmother… I was shocked and immediately lost my mind.”

Changing regimes are problematic for the unprincipled

For a change, listen to this song of the great artist Idris Mohammed Ali who is languishing in jail since 2005, extra-legally, without charge (can’t say trial because there is no legal system in PFDJ land, but law of the jungle). I thought of bringing his song as a reminder—such are the issues that we are talking about, but the PFDJ would not listen. And it will not take the unprincipled a minuite with any authority that rep[laces the current.

Since last year, I saw so many were influenced by the current jingoist messages of the PFDJ. Until recently, I though some of them were principled and ardent advocates of freedom and justice. I didn’t think they were a stew diluted and thinned down with too much water!

Once I was sitting with a friend watching a Jacques Cousteau program. He was interested at the scuba diving gear. I asked him if he knew how to swim; he didn’t answer but instead, he asked me the same question. I said I can’t swim. Surprised he asked me again, didn’t you ever go to Massawa and swim in the Red Sea? Well, there was a small pond in Keren, close to where I grew up but unlike the rest of the children, I didn’t learn to swim. I repeated my question, where did he learn to swim. He turned his head left and right and said, “in our house”. Did you grow up near a sea? No, he didn’t.

He said, he comes from a family with many siblings and poor upbringing. Their meals were injera (bread) and bowl of stew diluted with lots of water, and little pieces of meat that sunk to the bottom. He said, he would run to the scuba gear, put it on and dive in the bowls top harvest the few pieces of meat at the bottom. Poverty teaches people diving in a bow!

I wish the always-praising lots would think about the conditions of their people—not their diaspora friends and relatives. Don’t worry about Eritrea, it has its children who will always protect it. You need to protect the protectors not their abusers. Anything you do, if not for the benefit of the citizen, is useless and counterproductive. Other than that, engaging in empty rhetoric for years is insane.

And they want to peak more, but they are making us speak more.
We spoke for years, while they talked, threateningly for decades.
And today they want to appear as wronged saints.
What is that they didn’t say?
Didn’t they heap insults on anyone who dared to speak.
Didn’t they threaten all?
How many did they jail?
How many did they push out of the country?
What more do they and do and say?
Maybe they are provoking us to speak more.

But the day of reckoning is not far.
We will dream of it until the special down appears.
Why wouldn’t we dream of it! We are not PFDJ.
The dawn will certainly glow in the horizon
Even if we had to pull up the sun with our own hands.

There are some who would like to silence awate.com and Negarit. but the voice of concern for the people, being the voice of voiceless, promoting liberal values and peaceful coexistence, including promoting justice and freedom of the people, will not be stopped. However, we keep the spirit alive, encourage and inspire people to seek change in unison, but a voice is just a voice, it’s not tanks, and guns, and we do not have a source of income but its own national funds. The more you give, the more you keep these institutions alive. Chip in with whatever you can afford. For in numbers, great achievements are easier. Last year’s target of $19000 was not achieved, we run short by a whooping 9,000 we collected roughly 10,000. Therefore, this year we expect many more would afford to chip in, good the Covid tragedy is over, and many are back to normal life.

Please Give without delay and be generous for a worthy cause. You can make your donations on the link we are providing below on the descriptions space.

Thank you in advance.