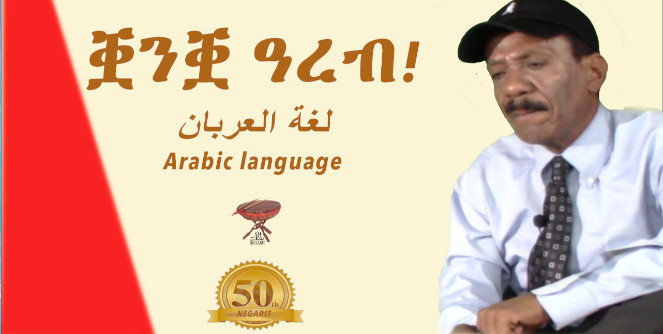 [Rough transcript of the Negarit 50] First let’s see how we are divided economically. The sedentary, the nomad, and the people of the sea. Each has a different economic development and each has its peculiarities. I might talk about land in this context but now let’s stick to culture whose main component for today is language–Arabic

I  had promised to talk about Arabic, here I am fulfilling me promise. How do people (some people) see Arabic.

Why is Arabic so much resisted by some people and why are most of them Tigrinya speakers, and Christians? To them, Arabic is perceived as a religious language. But there are Arabs of many religions and atheists. I believe it’s the political aspect of it. If we say someone is an Arab, it doesn’t describe his religion but his race. The first Arab speaking people our region knew (they are probably the ancestors of many of us) were not Muslims. They were not even Christians but pagans, believers of Ashtar and other ancient religions.

What language was Abraha speaking when he ruled South Arabia? Probably Hemerite, Sabean, or Arabic.  Abyssinian clergy go to Alexandria to study theology, but I am not sure in what language they learn. Egyptian copts use Arabic and coptic which is antiquated like Geez.. and they are not Muslims. So, languages is not equal to religion, they are neutral. But now we have fascists, ethnocentrists, bigots and hypocrites.

George Orwell said “the word ‘Fascism’ is almost entirely meaningless … and ‘bully’ is the synonym for ‘Fascist'”.

Before schools were stablished in Eritrea, people went to the church yards, monasteries and learned Abu Gida which is similar to Arabic by the way—before Haile Selassie changed it to Ha le Ha Me He Me Se Re Se

So, their education started with their respective basic education and both became their learning and self advancement languages. Muslims or Christians had no prejudice against Arabic and things existed naturally because the commonality in culture and linguistic similarity is amazing.

Alvarez and his group landed in Hergigo which he says was a Christian owned village but Moors lived there. Who are the moors? We will come to that.

They went to the Island of Massawa and had mass in a mosque, and the captain ordered the mosque to be converted to a church and named St. Mary.

That was in 1520s. We have to remember the Moors had just been pushed out of Iberia—Al Andelus, Andalusia. In his bookAlvarez says:

On some occasions it happened to us to sleep near these Arabs, they accosted us to ask if we wished to buy cows.These Moors, and headmen are all robbers under the favor of the lords to whom the cows belong,

I will skip a few centuries and arrive at Yohannes IV who took religious persecution to a new height when he proclaimed that anyone in his territory should convert to Christianity or face punishment, mainly death. Yohannes was promoting his version of Tewahdo and he also persecuted those who did not accept his sect’s doctrines. The rest of the Tewahdo had to leave their churches and convert to his sect—(people called the religion to which they converted as Kara Haymanot, derogatorily, the sect of the sword.) Many left their sects and joined his.

Yohannes could have had a grand view of uniting his kingdom under one religion like all kings and emperors of the time, to create a homogenous nation-state. It’s understandable but we do not have to look at our present state in his perspective and context. All others, mainly Muslims, in the region were forcefully baptized (This is a long and neglected history that needs to be addresses by competent historians and I will stop here.)

So, from Yohannes we jump into Haile Selassie era.

Haile Sellasie couldn’t balance the tilted scale and declared Tewahdo Christianity the official religion of his kingdom. He disenfranchised millions. Eritreans had reached the federal arrangement with Haile Sellasie and tried to balance the injustices and lack of freedoms that a feudal king could not offer. The Eritrean revolution started  to correct the imbalanced and claim their freedom, self-determination to chart their own future. They campaigned in the region. And found allies who could support them, Arabs. The clarion call was sounded—the Arabs want to invade Ethiopia, the Eritrea werebela (bandits) want to sell Eritrea to the Arabs. That craze has not stopped until today because there are uncleaned traces of it in our collective psyche—just like the current relations of Saudi Arabia and the UAE in our region.

Patriotic Eritrean Muslims and Christians, generally speaking, do not see an Eritrea without its Muslims or Christians, a nation of all, one country. Even many who are considered extremist do not cross that redline. But look at the Agazian, they are part of us, but feel their loyalty belongs elsewhere based on centuries old rivalries and even go back to the old testament. They do not mind wiping out entire groups of Eritreans just like that.

So, this is the context of the hate and prejudice against Arabic which is basically driven by bigotry against Muslims.

My language is Tigrinya, in addition to many layers of identities, I am a bona-fide Habesha. Importantly, I am an Eritrean whose primary loyalty is to Eritrea. And that is why my heart bleeds when I see our politics has come to a very low level. Hypocrites, bigots, fascists, and ethnocentrists have polluted our national discourse and made it a Byzantine discourse. But I do not blame them so much because, when the scholars and academics, and generally, the sane, patriotic Eritreans leave vacuum, only the crazy fill the gap. And the PFDJ is still spreading ignorance, denying generations the freedom to widen their intellectual and academic capacity. It’s producing soldiers, young people who think of nothing but to escape their country. It has denied the youth any beam of hope to build themselves, economically, intellectually, socially and yet stay put in their country. And denied them the tools of enlightenment. And that, ladies and gentlemen, is our sorry state.

Economically, and personally, people of a nation have many interests—it could be political, economic and self expression. Who denies that a big chunk of Eritreans Arabic is the intellectual, economic and cultural vehicle—their education, they knowledge base, among other things. So, waste all their intellectual capital and go back to study ABUGIDA, the tigrinya alphabets?

As you know, I have no such problems as far as language is concerned. But it is not about me; it’s about a big chunk of Eritreans and those who are not affected should listen and learn what those who say they are wronged, are saying. That is how a nation is build, not by being self-centered and selfish. At the end, we are supposed to be one nation, equal citizens with equal rights. That is enlightened citizenship that the PFDJ has failed to build because it thinks songs and folklore dances will do the job.

What I discussed above is one perspective and  I will try to show other perspectives so that we avoid byzantine debates and instead debate like equal, carrying, free citizens, with the aim to find solution, to find a direction that we can collectively follow.