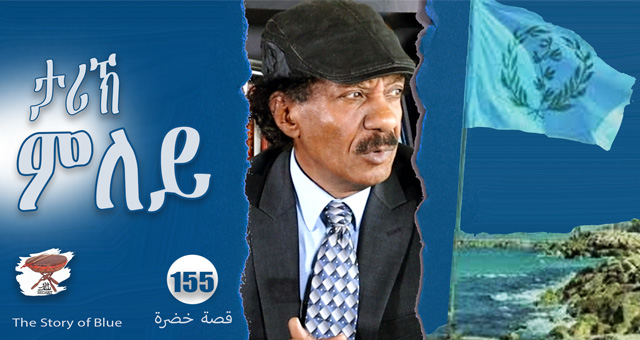 Today, I hope the restless would stay calm as I narrate a basic history of the Eritrean flag–the significance of our AwlieE, meley, HKhedra. I realize some people may have an opposing view, or to believe a contrary narration; it’s fine provided the counter narration is based on knowledge not on ignorance or bias. Some people adamantly reject views that are contrary to their perception and they argue in a vacuum, with so-much certainly. I will try to present the suppressed narration. And my presentation in Negarit 155 is based, mainly on an article which I wrote about 20 years ago (Linked below).

Between 1892-1941 Eritrea hoisted the Italian flag, and after the defeat of Fascist Italy by the Allies in WWII, Eritrea was taken over by the British military administration. Thus, the Italian flag was replaced by the Union Jack which was hoisted until 1952.

To this day, the blue flag symbolizes the agreement that Eritreans unanimously reached, It’s the only legitimate symbol of Eritrean nationalism. It was the symbol of the struggle for justice, peace and freedom that still rages on.

On the other hand, nationalist Eritreans brought the outlawed blue Eritrean flag from its hiding just to look and pay homage to it. Occasionally, in a very secretive ritual, parents showed the flag to their children so that they do not forget it. They told them that the Eritrean flag was their true symbol and not the occupational flag that Haile Selassie forcefully imposed on Eritreans.

The propaganda of the Unionist Party aggressively targeted the blue flag. To them, it was the “flag of the United Nations.” While the Ethiopian flag was elevated to a divine status, the Eritrean flag was portrayed as one belonging to the Bandits and Arab sellouts who betrayed their “Mother Ethiopia,” and want to separate the child (Eritrea) from its mother (Ethiopia). It was difficult for many who grew up feeding on this type of propaganda to come to terms with the fact that the blue Eritrean flag was decided and approved by the Eritrean founding fathers, by the first ever elected body of legislators that Eritrea ever produced.

In its organizational congress in 1977, just a few years after all patriotic forces rallied behind the blue flag, the EPLF perplexed Eritreans by coming up with a new flag inspired by the leftists of the era and claimed it was an organization “banner”. Not many believed the reasoning. The EPLF flag had three triangles: blue, red, and green, and a yellow star in the red triangle. And the residue of that decision is the damage that inflicted the Eritrean psyche and unity; it’s still damaging the Eritrean social fabric. A big chunk of Eritreans believes the EPLF launched what it called its organizational “banner” with an intention to erase the blue flag.

Starting in 1991, after the independence of Eritrea, both flags were merged to form a shabbily designed combination of a tasteless flag with uneven triangles where the blue flag, now changed into a triangle, was stitched to the bottom of the EPLF “banner.” That combination flag was promoted with a slogan “Free Eritrea”, and printed on T-Shirts, posters, and stickers, and became the de-facto flag of the EPLF government. It was hoisted until 1993, the time the referendum for the self-determination of Eritrea was carried out.

Officially, according to the PFDJ’s drafted but unimplemented constitution, the present flag is transitional; it unequivocally states that the National Assembly will make the final approval of the design of the flag. However, in Article 4 of the unimplemented PFDJ constitution, in the part that deals with “National Symbols”, article 1 reads like a fait accompli statement: “1. The Eritrean Flag shall have green, red and blue colors with golden olive leaves. The detailed description of the Flag shall be determined by law.”

As of now, more than three decades after independence, Eritrea doesn’t have an elected Assembly, and the unelected Assembly has not met for almost two decades after it did to condemn the G15 who are languishing in jail for twenty years with many others. Funnily, a member of the PFDJ central committee wondered if he was a member when I asked him about some issues. He has forgotten he was one!

The PFDJ didn’t explain why the flag was detailed for approval while the National Anthem and the designing of the Coat of Arms were left for the future National Assembly to decide upon.

The PFDJ is neither qualified to choose the symbols of Eritrea nor credible enough to lecture Eritreans on the virtues of a flag.

Symbols are of great psychological and moral value through which affinities and allegiances to an idea or an entity are expressed. People need symbols that reflect their identity, their aspirations, and values. And they carry bad memories of the symbols of colonization or occupation. That is why the Ras Teffarian bandanas and headbands irritates many Eritreans. It is the flag that they consider the symbol of Ras Tefferi, whom they consider god. Personally, I always hid my liking of Reggae music, specially of Bob Marley. Many Eritreans do not like to be reminded of the untold sufferings and atrocities committed under “Ras Tefferi (Haile Selassie)” and that flag.

Symbols Of Many Colors