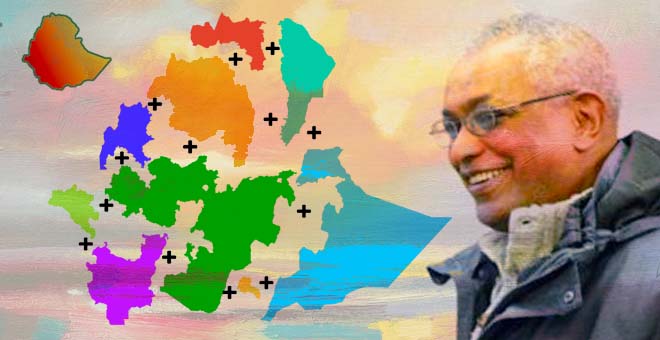 Sifting through endless mazes of social media outlets to find a discourse that engages one’s intellectual faculty requires ample patience and restraints of the highest order. The attendant subject matter, namely, The Horn of Africa, is no exception in that it has proliferated in magnitude, in volume, proportional to the virtual world at large. When that rare intellectual gem is discovered, however, all the trouble that one goes through on a daily basis to find something worth spending one’s precious time for is quickly ­forgotten. Such rare moment of interview with Ghirmai Negash has compelled the Awate Team to bring the intellectually engaging conversation that gives historical, factual, and genuine assessment of the situation taking place in the Horn of Africa today.

Ohio University professor Ghirmai Negash was a guest in the Eritrean People’s Sovereignty (EPS Media) recently on 27 December 2020. The ongoing, complex and dramatic events are very difficult to untangle. But, as many viewers in Facebook have written, they are skillfully (and unapologetically!) analyzed; and their causes and consequences illuminated by the professor in this dialogue. Instead of seeing the contentious issues through a micro-lens, which would be solely between Tigray (a state actor) versus Ethiopia (the central government actor), Professor Ghirmai uses a macro-lens, the Horn of Africa, as a tool of sociopolitical analysis. This approach allows for a broader sociopolitical vantage point from which to view and understand the current crises in the region. Based on the available scholarship, on concepts of (1) colonial and postcolonial ‘center-periphery’ dynamics,  and the (2) the historical and geographical proximity of the main actors involved, the interviewee sheds light using as a foreground cultural, linguistic, and religious factors and dispositions to elucidate his points.

As a general principle,  Professor Ghirmai stipulates that “the peoples of the Horn” have been coexisting, intermarrying within and across religions and ethnicities, and continue to be its historical and cultural hallmarks to the present day. Cultural and historical intersections, thus mutual appropriations in one form or another, have been and continue to be one of the region’s distinctively defining features.  At the same time, at macro sociopolitical level, the most powerful group(s) also established their “power centers” by raiding the less powerful groups in this historical process. Or seen from ethnic standpoint, it can be said that the marginalized ethnic groups within the Horn of Africa were made victims of the more powerful ones. As ‘subalterns’, these groups lacked mechanisms for recourse, and were often crushed as the lesser ‘others’ by the ‘center’ at times they attempted to fight for their rights, and for cultural or political autonomy.  Theoretically, the notion of the ‘subaltern’ was developed by the Italian thinker, Antonio Gramsci. As he defined it: “In postcolonial studies and in critical theory, the term subaltern designates and identifies the colonial populations who are socially, politically, and geographically excluded from the hierarchy of power of an imperial colony and from the metropolitan homeland of an empire.” Gramsci’s concept of the term subaltern is broadly used “to identify the cultural hegemony that excludes and displaces specific people and social groups from the socio-economic institutions of society, in order to deny their agency and voices in colonial politics.” Now, professor Ghirmai does not explicitly refer to Gramsci during this interview but it is clear, at least At, that  his line of exploration is, or may be, driven by this Gramscian, critical awareness or something akin to it.  And, as I will discuss below,  the above historical drop and assumed conceptual assertion offer indeed the appropriate framework to explaining and understanding equally the content of the interview and its subject-matter–the political and military conflict between the ‘Central Government of Ethiopia’ and its ‘Northern Tigray region’.

Professor Ghirmai’s talk/interview was titled “From Unitarianism to Medemerism: Perspectives on the Past and Present”. What we see in Ethiopia today, according to him, can be clearly understood if we look back with a historical lens at the century of Emperor Menelik’s reign. Vanderheym went along with the central government during Emperor Menelik’s raid of Wolaita and Oromo documented what he saw, and what we see from his account are disturbing descriptors that were used by the Emperor and his echelons. Terms such as, savages, uncivilized, pagan groups who need civilizing were the stereotypes used to characterize the victimized groups, of whom countless lives were also lost. This was no different from the way the European colonial powers used to describe the colonized in the Continent of Africa. The federal government’s internal war that we observe today can be characterized as Ethiopia’s century old empire-building strategy that started with Emperor Menelik; in fact it should be viewed as nothing less than a continuation of the ideology and practices pursued by the said empire. There is plenty of historical evidence for this. Although “there is a hierarchy within the center as within the periphery”, as the professor states, the political map and ensuing conflicts of the Horn of Africa continue to be driven by the dynamics of the ‘center-periphery’ ideological idea and its practical implications, victimizing the ‘subalterns’ in the interest of powerful elite groups.

Professor Ghirmai Negash’s contention can be enhanced from this rare, yet an important addition that would ostensibly shed light to the mindset of Ethiopia’s elites. In this brief video clip, an Ethiopian student abroad argues the superiority of Ethiopians over other Africans to even unilaterally claiming he or other people like him were not blacks fits the bill  here.**

In his presentation, Professor Ghirmai threads cautiously and carefully the ‘Medemerism’ needle to its antecedent of ‘Unionism or Unitarianism’ followed by Emperor Haile Selassie when he annexed Eritrea (and of course which goes all the way back to Emperor Menelik’s era). Belaboring here won’t do the presentation justice. Suffice it to mention that those who understand Tigrinya language are in for an original, historical-political insight on our region that will enhance our understanding on some seemingly baffling events, both predictable and unpredictable. Professor Ghirmai’s analysis of Abiy Ahmed’s book Medemer  brilliantly makes the connection between the ideology of what he coined as “Medemerism,” and which he sees and explains as a contemporary iteration of the old ideology of “unionism.” The notion of ‘Unionism’ alludes to the historical political stand of the “Eritrean Unionist Party”, active during the 1950s and 60s. The party worked in tandem with Emperor Haile Selassie’s Ethiopia to dismantle the Ethio-Eritrea federation (1952-62), an act of aggression that led to a thirty-year war of liberation in Eritrea (1961-1991). In turn, the interconnections of these historically distinct but deeply interconnected ideologies—that is ‘unionism and medemerism’—are extended to provide explanations not only for what is happening between Eritrea and Ethiopia in the current conflict, but also to account for much of what is happening today with regard to Abiy Ahmed’s military raids against “minority” communities and historically “marginalized populations” in Benishangul-Gumuz, Oromia, and Tigray.

On External Interventions in the Horn

There also is the recurrent factor of ‘outsider’ intervention in the Horn of Africa. For example, Emperor Haile Selassie was aided by the British airpower in which Mekelle was bombed, previously. This took place during the first “Weyane Uprising” that started in 1943. Degiat Yebio Weldai pushed Emperor Haile Selassie out of the Tigray region, for which Tigray ended up getting bombed relentlessly by British war planes. Similarly, during the Eritrean struggle for self-determination, the Eritrean fighters and people were bombarded by the Ethiopian air and ground forces, aided by foreign powers, especially the United States, the former Soviet Union, Cuba, and former Eastern bloc European countries. These were foreign entities trying to define and redefine the region according to their geo—political interests. to their respective sphere of influence. In light of this, the military intervention of foreign powers in the current Ethiopian conflict should come as no surprise, and we will very likely see more of it in the future, the professor states.

What the Awate Team found uniquely interesting in the interview is also the scholar’s ideas for moving forward. Insisting on the need to “always historicize,” as the great American literary theorist, Frederick Jameson, always insisted, the literary theorist Ghirmai Negash also invites us to be historically conscious and critically minded, whilst warning against the dangers of “unitarian” ideologies and their rhetoric that, particularly in the historical context of the Horn of Africa, are too often constructed to conceal true intentions of aggression and territorial expansion.

This piece is not a substitute to the vid clip being provided; rather it is a short critical summary squeezed out from Professor Ghirmai Negash’s talk.  We took the liberty to provide a critical appraisal of the interview because we felt the need to make this important interview accessible to English-language speaking readers. His words have been paraphrased where it was deemed appropriate; and we have expounded upon his ideas where it was rendered important to do so in order to furnish a comprehensive picture of the analysis. Give it a listen, consequently, your perspective will be enriched. The Awate Team’s purpose here is to highlight for readers so you put the information to a good use by discussing issues in a mature fashion.

As far as we are concerned, as Professor Ghirmai clearly explained, the key issues worth considering vis-à-vis Ethiopia and Eritrea are as follows: If the relationship between Ethiopia and Eritrea is confined to trade, economy, durable diplomatic relations, tradition and cultural exchanges, which was done before and it will be done in the near future, it won’t cause any conceivable rift. The rift can reach to an exacerbating point, however, when the center wants to control what it considers the periphery. Today, Tigray is the Central government’s periphery; tomorrow it may be Eritrea. The latter possibility is against which Eritreans should do their utmost to prevent from happening. Cooperation in itself is well and good, but it should never come at the expense of the sovereignty of the Eritrean people.