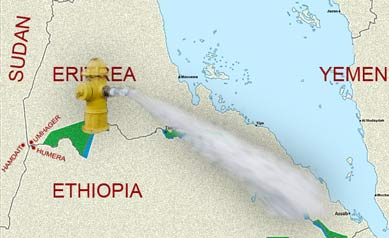 Tens of Ethiopian civilians allegedly kidnapped a month ago by rebels–operating out of Eritrea and supported by its government–have been released yesterday. An Ethiopian radio station announced the news.

Other reports indicated the prisoners were “sent across the border to the Sudan on their way to be returned to Ethiopia.”

Earlier today, adoulis.net reported that, “around fifty armed Eritrean soldiers and civilians who crossed the Eritrean border to the Sudanese territories about four days ago, are now in the custody of Sudanese intelligence outfit.”

Sources from Gedaref, Sudan, who spoke to Gedab News couldn’t confirm if the reports actually, “referred to two separate batches of arrivals or only one.”

The sources also said, “so many people are arriving in Sudan through the borders close to the triangular region.”

The three towns of Humera (Ethiopia), UmHager (Eritrea), and Hamdait (Sudan) are located in a triangular region straddling the three countries.

Ten days ago, Ethiopian sources indicated that as many as 80 Ethiopians were kidnapped by Ethiopian rebels who infiltrated the Tigrai region from its northern neighbor, Eritrea.

The Ethiopian civilians were allegedly kidnapped on January 29,  from an area called “Idris” near Humera, where many Ethiopians illegally mine for gold in a traditional way.

On February 18, 2016, an eyewitness told VoA Tigrinya program that around 400 people were working at the gold mining site when armed men from Eritrea surrounded them. The eyewitness also indicated they were taken to the Eritrean side of the river from where they attempted to escape and chaos ensued. Consequently, they were shot at and one person was killed while another drowned in the Mereb/Setit River.

The security situation between the two countries has now escalated to an alarming stage. While the Ethiopian government has accused the Eritrean government of having a hand in the unrest in Ethiopia which has resulted in the loss of many lives, the Eritrean Ministry of Information responded to that accusation today in a press release. It stated:

“The TPLF regime has marginalized the Ethiopian people in the past twenty five years to install an economy beset by endemic and unbridled corruption and that is controlled by embezzlers. It is this grim reality, at odds with a spurious and embellishing narrative, that has prompted and underpins the ongoing protests of the Ethiopian people.”

As a result of the escalation, the two countries are amassing their armed forces in the border areas where they have brought engineers and large number of earth moving equipment to work on the border area terrain.