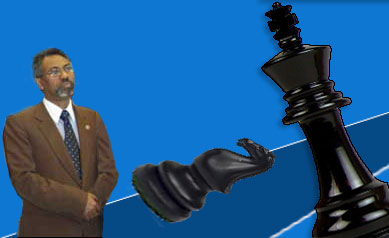 Mr. Yemane Gebremeskel, aka “Charlie”, has been named Eritrea’s Minister of Information, according to his ghost writers at Tesfanews.com.

He replaces Ali Abdu, who defected from the post in November 2012.   I think it was November 2012 although I can’t be sure because the other ghost writers at madote.com had sworn they had seen him strolling Asmara streets in January 2013.

The announcement of Mr. Yemane Gebremeskel’s de/promotion (we will talk about that later) from Director of President’s Office to Minister of Information is unusual—at many levels. Some of these are simply odd, others could pose a real threat to Yemane and still others to the whole PFDJ edifice:

1. It is unusual for the promotion and demotion of a Minister to be announced. The way Isaias Afwerki likes things is for their colleagues to be surprised at their next Cabinet of Minister’s meeting.   The ghost writers at Tesfanews.com have broken with tradition and protocol and upset Isaias Afwerki. You just can’t ruin surprises; its not cool.

2. The “arguably one of the most educated government officials” description is bad, bad, bad for Yemane Gebremeskel.   Whenever somebody is promoted to a position, what the PFDJ hierarchy asks is “Gebar diya welas Tegadalai” (is she a civilian or is he a veteran of our armed struggle.) Note the Chegwar Danga protocol: if you are asking about gebar, use the feminine gender; if you are asking about Tegadali, use the masculine gender. ሰብኣይ በዓል ስረ ‘ዩ ‘ምበር ኣታ! (Please do not ask me how they deal with a female Tegadalti.)  ሕማቅ መዓልቲ ውዒልካ, Charlie: this phrase “one of the most educated government officials” is not good for anyone, but  particularly for you, Charlie, who didn’t participate in the Armed Struggle and returned from the West to Eritrea in 1992: it will just remind your colleagues what they paid for Eritrea and what you paid for Eritrea.

Most importantly, your boss, Isaias Afwerki, likes his assistants, ministers, generals to be barely educated.   Think back of all the biographies that are read at the funerals of generals at the Martyr’s Cemetery: ስውእ ኽስቶ ወዲ ኽስቶ ኣብ ብዙሕ ኩዊናት ዝተሳተፈ፥ ተዋጊኡ ዘዋግእ፥ ምቅሉል… the message is always the same: he was a warrior, and he was humble.   You were not a warrior and,  if you keep bragging about your education, you are not being humble.   In the biography of the deceased, there is never a line on their education level, unless it refers to their military education. Come on, Yemane, can’t you learn from the lessons that made Hagos “Kisha” Gebrehiwot the most hated person in Eritrea?

3. Good on you for green-lighting the BBC interview just in time for the announcement. That shows initiative, leadership, all of which are really, really bad. You should have gone for a smaller fish. This is the BBC: you cannot script them. They will dig.   What did you get from the three-part interview? You got them to say that Eritrea is doing very well in the health indices of the Millenium Development Goals—something you had already gotten from the United Nations, repeatedly. And they will continue to say it, all year, because the MDG terminates this year.

What did the BBC get in return?   It got to make a fool of your colleague, Yemane Gebreab, who did the standard challenge (come to Eritrea and see for yourselves!) and they took his challenge to discover for themselves what an open society there is in Eritrea by interviewing Eritreans; except that they couldn’t because 37 out of 37 Eritreans refused to talk to them.  That is the sort of news that makes headlines; it is the kind of information that will get repeated over and over and over.   Mr. Yemane Gebreab (who is arguably the smartest party or government official and who, arguably, I was the closest to before that damn TwgaHmo article) knows more than anyone else what the result for BBC will be. Given his “cordial” relations with some Western agencies, he has to act the way he is acting. Arguably.

Mr. Minister, at some point, they will ask you about journalists—you are, after all the Minister of Information—and you will say, what? It was all the fault of the former Minister of Information? Then she will ask: “does that mean all journalists who were arrested BEFORE he became the Minister of Information (those arrested prior to 2005) and those arrested after he left the post (after Novemer 2012) are freed? Have they been brought to court? And you don’t have that cool cucumber presence of Yemane Gebreab: you will stutter, you will stumble and you will lose your temper. I know it and you know it.   You will say that that is not your department and they will remind you, “sir, you are the Minister of Information: isn’t it your business to know?”   They may even ask you to back up your claim that “In 2013, U.S. Intelligence Contractor Stratfor confirms that Eritrean opposition websites, including Awate.com, are CIA backed” because you are playing with the pros now: you just can’t make stuff up as you go.

4. Speaking of CIA.   Those are bad mofos: don’t pick a fight with them unless you have to. You know that agency likes to recruit compromised people. So you have to ask yourself: have I been faithful to my wife? Are there pictures circulating around with me in the company of girls who are as young as 16 or 17? Nowadays everybody has a camera phone.  Do I have other weaknesses—do I enjoy a fine cigar? Fine wine? Expensive whiskey? Do I like to be fashionable? Am I materialistic? Do not mess with the CIA: they are already updating their who-is-who file.

They are nasty people, those CIA. If they can’t buy you, they will destroy you. Say you and your colleagues are sitting around making big speeches about International Women’s Day and they, and I am being hypothetical here, just leak pictures of you and your male colleagues and boss just whoring around? How would 50% of Eritrea’s population take you seriously from then on? Let’s just hope you don’t piss them off.

5. Demotion or Promotion? Yemane Gebremeskel has headed the office of the president since BEFORE the president was a president, when he was still the “Secretary General of the EPLF”, before the Provisional Government of Eritrea (PGE) was Provisional but Transitional (TGE.) At the nucleus of power, he knows where all the skeletons are buried. Now he is leaving to go head a Ministry of Information that has built a world-wide reputation for having more journalists arrested per capita than any other nation and he will be several blocks removed from where the center of action is. A position so non-essential it was vacant for over two years.  In the organizational chart of Eritrea, this is clearly a demotion.

Who is going to be the incoming Director of the President’s Office.   Whoever he is (and it will be a he), if he is smart, he won’t be dictating his acceptance speech to the kiddies at Tesfanews. Unlike Charlie, he should surpass his ego and not tweet and brag. That’s why we already have an ambassador to the State of Twitterstan, Mr. Estiphanos, who also doubles as Eritrea’s ambassador to Japan.   There is little chance of that, I feel assured, because Tesfanews is owned and operated by Yemane & Yemane (who have let shaebia.org die with a whimper.)

Well, there is an upside. Maybe shabait.com will start writing in English now that it is headed by “arguably the most educated government official.” I look forward to fine phrases like “unwarranted and calumnious act of hostility.”