Confession From Outside The Bubble 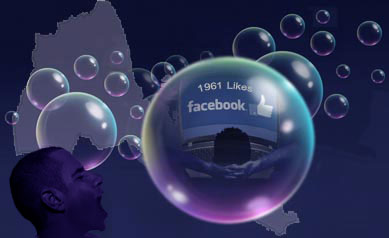 Consider today’s Negarit edition mainly a confession booth; I hope the so-called “silent majority” would join me. But first let’s remember the phrase “silent majority” was popularized by President Nixon, who robbed the anti-war constituency of the credit for the decision to pull out of Vietnam, and countersigned that credit to his Republican constituency.

In a 1969 speech Nixon said: “And so tonight–to you, the great silent majority of my fellow Americans, I ask for your support.” Thus, he bastardized the phrase “silent majority” which until then was a reference to “The Dead”. Unfortunately, the phrase was introduced to the current Eritreans struggle as a lexicon in its Nixonite form, provoking others to revert to its origin as “a euphemism for the dead.”

A Theory: let’s Recognize Our Size

I want to test a theory and I am soliciting your help; hopefully the exercise will conclusively prove (or disprove) my theory regarding the size of the real Eritrean Diaspora activists. Please list all the names of people you know to be declared opposition elements and at the same time pray for the “silent majority” to Rest In Peace.

If three persons can list four-hundred individuals, even if by including family members, it’s a miracle!

Over the years, I supported what I considered promising endeavors that would help the overall opposition camp, while at the same time criticizing activities that I thought were worthless. Most of the time I played the devil’s advocate arguing different, sometimes unconventional, perspectives hoping to help a more focused and effective struggle for justice and freedom. Regrettably I annoyed a few in the process, and in a few cases I earned enemies who are engaged in turf wars. But the fight for a national cause is so important to be stopped for fear of bruising some egos. I always moved on.

The opposition camp is wide. It is even wider if we add the so-called Nixon type “silent majority” who oppose the regime secretly. Why are they silent anyway? Certainly there are many reasons for their silence, but none of it can be blamed on the organized opposition.

Generally, the so called “silent majority” is silent because it is intimidated by social forces. Effective regime propaganda and fear of being ostracized is an emotional assault they’re are ill equipped to withstand, even if they live in democratic countries, not burdened by life’s basic needs. Though they do not approve of any of the charted paths, they are not willing to chart their own path and to fight for it . Still, blaming one’s inaction on others is mind boggling. Being silent is not a virtue. Eritreans should take solace in the fact that not every able person fought for the independence of Eritrea, only those who were determined enough did so.

The so-called “silent majority” camp is an assortment of different individuals; very few have plausible reasons to be silent:

Struggle is very taxing, and there’s a dead-weight that pulls it back; some of the above dead-weights are a liability to the nation let alone to the opposition. Efforts to win them over is fruitless, except for The Disillusioned and The Careful.

The Internet is full of heaps of insults and defamation hurled at the opposition by the “confederates” of the so-called silent majority and the PFDJ mouthpieces. Surprisingly, not a fraction of that is directed at the PFDJ! How is that even possible?

There are many factors that have frozen the so-called “silent majority” who have mainly succumbed to the relentless barrage of propaganda, the onslaught targeting the organized opposition, including the war of attrition waged by OTTO (Opposition To The Opposition) who claim to be members of the broad opposition camp. OTTO targets the organized opposition using bigoted battle tools picked from the PFDJ playbook. It vengefully accuses the opposition as treasonous, as sellouts, and as unpatriotic. Ironically, all these vices can easily be attributed to the PFDJ. But in some Diaspora circles, it’s trendy to badmouth the organized opposition which, ironically, is blamed for all the ills befalling Eritrea!

There is a common slogan: Let’s agree on a minimum program! However, those who live outside the bubble know that there are “maximalist” and Minimalist demands within the opposition camp. It’s unfortunate that no one has managed to form “a middle ground.” For instance, I belong to a camp that believes in weeding out the PFDJ regime. It is difficult for me to work with anyone with less than that minimum demand.

It’s disingenuous for strategic allies to ask the organized opposition to accept the continuation of the ruling party that brought Eritrea to a risky edge. But if saving the regime is the only solution, then the opposition would be better off negotiating directly with the PFDJ itself, not with brokers. Why should it accommodate a proposal by self-appointed brokers who are in a partisan power struggle? The organized opposition might be weak, but it doesn’t lack principles. Certainly it doesn’t lack wisdom.

Nevertheless, there is a snag: Does the opposition have the needed leverage to force the regime to sit and negotiate with it? Absolutely none at this time. However, though a few people think that the political and security situation in Eritrea and the region is constant and not changeable, all those who live outside the bubble know it’s prone to change. Any change in the region will certainly result in new alliances, new arrangements, and new realities in the balance of power and political leverage.

It’s important to note that a political struggle for justice and freedom should not be treated like a product that a for-profit corporation markets. Corporate performance is assessed by reconciling books every year to produce a profit and loss statement; if the figures are in red, sell your stock, wrap up, and go home, and if the figures are in black, rejoice, reward your CEO’s, and plan for more profits for next year. Such methods cannot be applied in assessing a struggle, its emotions, its culture and value, and other non-tangible individual and social investments. Corporate balance sheets cannot measure the humanitarian and morale aspects of workers’ lives: their emotions, trepidations, and aspiration. A citizens’ freedom and dignity cannot be willfully monetized to be reflected in an accounting record.

Confession From Outside The Bubble

When you live in an Internet bubble your worldview becomes limited to the tiny space enclosed within a thin wall of foam. Nothing is relevant unless it competes with you for more space within the bubble. Undoubtedly social media has empowered citizens to have a say, and in our case, a few are using it effectively by bringing ideas and triggering brilliant debates, particularly on facebook. But as far as the overwhelming majority is concerned, and in relation to the Eritrean opposition, I don’t think facebook or twitter has contributed much–we simply are not using them effectively. Social media has created a wrong sense of self-worth and an illusion of invincibility in the minds of quite a few people. That tiny bubble, however big it may appear, cannot accommodate even a fraction of the Eritrean struggle that is being waged in pursuit of justice and freedom. That is why communication with those who live inside the bubble is frustrating. However, fortunately, after three years of seclusion inside the bubble, many Eritreans are realizing its claustrophobic nature and are becoming sober. We should not forget that in the Eritrean case, the social media bubble is too inflated and might burst just like the dot com bubble did.

After giving generous benefit of the doubt to the bubble, now I realize that I abandoned the serious opposition when it was being kicked left and right, and facing an aggressive onslaught by amateurs who haven’t made up their mind regarding the ruling regime. Of course, the slow pace and weaknesses of the organized opposition camp is disappointing, but regardless, one has to stick to principles and see the bigger picture.

Importantly, there are critical questions that we need to ask: what is the alternative to the organized opposition, however weak it might be? The social media battalions and the mediocre bigoted cadres? The Neo-Andennet? The naive who think making one negative comment makes you an opposition figure? Those whose main credential is the use of vile, racist, and bigoted language against Ethiopians, against Arabs, and against their compatriots? Individuals who have nothing to offer but their bitterness with the “Weyane”? Groups who are busy curving their envisioned fiefdoms in Eritrea once someone else removes the regime for them? The intellectually lame scholars? Those who think they have a mandate to lead the millions of Eritreans because they belong to the Diaspora? Those who want to enlist the young as their foot-soldiers in their quest for raw power and rivalry? Those who claim to be enlightened, but are immobilized by the shackles of tribalism, sectarianism, and chauvinism of all types? Those who are still living in the partisan atmosphere of the Eritrean struggle era?

Soon I will have a say on the counter-productive struggle-era rivalry, and the useless ELF/EPLF partisan loyalties, that some are campaigning to revive. But until then… are any of the above, an alternative to a diligent organized opposition? Can any of those be trusted to lead the Eritreans struggle in search of freedom and justice?

Sadly, the organized opposition camp is not free from such destructive elements, it houses their duplicates simply because it’s is a social problem and will exist glaringly visible in any segment of Eritrea as long as it is not resolved. But within the organized opposition, those elements and ideas are not as noxious. They’re fomenting aren’t out of sight in suspect gatherings. They are there, openly. But the organized opposition has recognized those social ills and is courageously facing them, wisely negotiating and taming them, and educating about them. In the process, it’s chipping away the mistrust that prevailed for too long and resolving them piecemeal, not avoiding them by hiding in a bubble!

All of the above leaves us with a choice of what we can broadly define as the genuine organized opposition. I never believed the Diaspora cacophony would bring about change through part-timers and hardly passionate individuals. That’s why I support the more dedicated individuals. But I feel I didn’t do enough in the last few years. I made a mistake and I apologize. That is my confession. My final statement is: I fully support the organized opposition and I will promote its struggle for unity and progress. Only an organized opposition can usher justice and freedom.