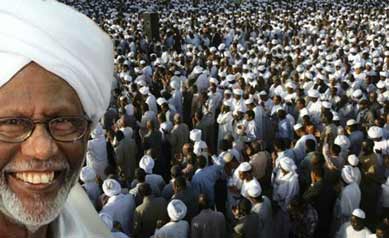 On Saturday evening, Sheikh Hassan Al-Turabi died in a hospital where he was admitted earlier in the morning. Turabi was 84,

The remains of the famous statesman, thinker and controversial intellectual was buried at the Burri cemetery in the Sudanese capital city, Khartoum.Thousands attended his funeral. .

Family sources indicated that Al-Turabi complained of pain after which his health quickly deteriorated. Soon he lost consciousness and was taken to Khartoum’s Royal Care International Hospital, the official Sudan News Agency (SUNA) reported. He died that evening in the same Hospital, the cause of death is believed to be a stroke.

The polyglot Turabi was fluent in Arabic, English, French and German.

In his fifty years of political career since Al-Turabi returned to Sudan after finishing his studies in Europe, he was always a renowned political figure and he is credited for being the founder of the Popular Congress Party.

I first met Sheikh Hassan Al-Turabi in 1985 when I visited Khartoum. Over the years I had the opportunity to interview him several times; not a single year has passed without me having tapped into his vast experience, knowledge, and wisdom.

In 1992 I interviewed him in Doha, Qatar, and later in the same year I met him in Asmara–Between 1996 and 2010 I interviewed him once or twice every year. But of all the discussions I had with him, the interview I conducted in 1998 stands out glaringly. It was an interview that gave me a deep insight into the man and his ideas for the development of the Horn of Africa region. We discussed about the Ethio-Eritrea war, which was raging at the time, and his Islamic programs. The interviews were published in several Arabic magazines and newspapers.

From what I know of him, describing Sheikh Turabi as a radical ‘Islamist’ is a mischaracterization. I knew him as a tolerant man, though he held divergent and controversial ideas. But he was a moderate and believed that Sudan should be closer to the Horn of Africa region than to North Africa.

Al-Turabi is widely rumored to have been behind the 1986 coup d’état that overthrew president Jaafer Al Nimeiri. After the coup, General Sewar Al Dahab formed and led a transitional military government which a year later handed power to the democratically elected government of Sadiq AlMahdi. However, in 1989, Omar Al-Beshir, then a brigadier general, overthrew Sadiq AlMahdi’s government in a military coup d’etat.

Al Turabi was the spiritual leader of the coup, but at one point, he had a disagreement with President Al-Beshir and was imprisoned. He was released afterl he declared his support for the idea of Sudan’s National Dialogue that was proposed by Omar Al Bashir. The relation between the two had improved since then.

Al-Turabi is also known outside Sudan where internationally he was a consultant in the process of drafting of the constitutions of several Arab countries including those of Kuwait and Qatar.

Al Turabi was honest, straightforward, clear minded, and confident and he was a man who cherished cooperation, and he held no grudges. Sudan has lost a dear son, an excellent intellectual, a thinker but it can only take solace from the fact that his teachings and writings will be a reference for generations to come. May he rest in peace!