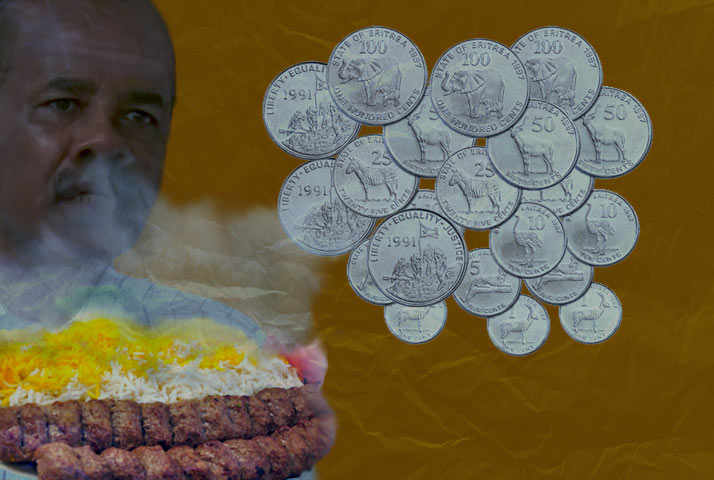 I came across this story long time ago, when a knowledgeable man, an Eritrean, was using it as an allegory to a real life-situation he was delineating. In the context of his topic, the story seemed to lock to the situation firmly and portrayed its details in a true and revealing analogy. The story, though funny and looking superficial to the uninitiated , simple and single layered in its implications, is, to the contrary, subtle,  complex, multidimensional and comes in many shapes and forms. This is the story as told by the old man:

There was, once, a tramp who couldn’t afford the money to eat shish-Kebab in a restaurant, but have enough ingenuity to find a way to eat what he can afford (that is dry bread with no gravy or meat) and eat that with sticks of juicy Kebab that he may pay not a dime for. It was a brilliant idea and above all no blood would be shed for it.  He goes there nearer to the cook doing the sticks, and stands taking a position, getting busy eating his bread on the smell and aroma coming out of the meat grilled beside him. The restaurant manager, observing the drama since its inception from afar, decided, at last, to have a role while trying to make profit for his business. He jumps to the tramp’s throat asking for the price of the smell and the aroma which he included his bare bread meal. The tramp, confused as he should be, was not entirely friendless however, for there was a third man, with a wider perspective of the theatre, observing, at the same time, the whole episode from its beginning, including the manager’s moves and advances. He, at last, jumped from his table and came swiftly to the center of the drama and tossed a few ringing coins to the floor. Distracted by the jingle of the coins, the manager turned to look at the coins on the floor and then at the man who tossed the coins standing close by, smiling.  Taking one step forward closer to the manager, the man, giggling, said to him: the jingle from my coins you just heard was the price, including the tips, paid in full for this man’s full meal of smell and fumes of your shish kebab, and that settles the matter once and for all.

Now, you may be doing well if you started scratching your head, searching for a parallel to this story in meaning, applied to your experience of reality, but I, I propose to you a perfect looking analogy to reality, in this story.  Doesn’t your self- appointed president, IA, looks as if he is in the restaurant–manger’s position wherein the Eritrean people are asked to pay for a merely descriptive and unsubstantiated  Independence? You have the right to argue this and say why, our independence is not theoretical and certainly is not unsubstantiated, you have also, at your disposal, a juxtaposition of facts supporting your Feelings and warm temper:  we have a flag, you would say, and we have a national anthem! a seat in the United Nations and in the AU, we have a national currency, Ambassadors and Embassies around the world and we have, above all, an Army, a big army. All grand and stuffy assuring things, especially the flag and national anthem, and the army segments. The flag and the anthem are good for  serving as our mirror of necessary narcissistic self-projection, the army for satisfying the condition of the old league of nations’ definition[i] of a nation as being that of an entity capable of waging war. And, oh, boy what a ‘war waging’ entity is our nation! No one nation could rival or surpass our newly invented nation in the ‘war waging’ industry except that 19th century small landlocked nation of Paraguay, who, in 1864, started a war ( curiously enough dubbed as “El Guerro el Mas Stupido” )[ii]   on all three countries surrounding it, at once, and lost two thirds of its male population in the process although it almost managed to beat all its foes, together and at the same time, before being ground down and damn near wiped out at last.

The particulars of the 19th century Paraguay with its super-macho psyche is indeed depressing and weighs heavy on the heart of even a remote spectator watching through the 21st  century aperture. But, lucky him such observer, the law of association and contrast is here to rescue him from grief and bail him out of bemoaning and lamenting the human condition by pointing out and revealing, in the spirit of consolation,  a bright spot shining now in that neighborhood of gloomy past. Perhaps, it would be perceived comfortably if the story of this glittering spot is wrapped in familiar terms, tangentially close to our environs, that is why our version of the story starts with yet another story which took place sometime ago under the roofs of the Security Council of the UN. The story involved the Representatives of the Republic of Sudan and the Republic of Costa Rica in a not so cold an altercation[iii]. It is important, here at this point, to remember that the Republic of Costa Rica has, since early in 1947, dismissed and abolished its army and further made it, constitutionally, illegal to resurrect it.  This seems to have happened in response to objective reasons, but considering even the narrowest mundane rationale makes it seem, indeed,  a wise and clever move from a country bordering two relatively huge neighbors, the only ones it can, theoretically, go to war with, and which however strong it may get, the venture to take part in a war with either of them may be suicidal in the last analysis. So why have an Army which will, always, be expensive and, surely, lose against the bigger brothers any way? Additionally, that country may have, correctly, figured out that in our modern world no one dares waging  war on nations without armies, it may have thought so, and so it dissolved its army forever.  The Sudanese representative, angry at Costa Rica for backing the council’s resolution on Darfur, thought that he got the hyena by the jugular, and threw the B word to the floor. He branded Costa Rica and called it a ‘Banana republic[iv]‘. The Ambassador of the banana republic didn’t get mad or anything near, he just referred the Sudanese Ambassador to ‘the United Nation’s Human Development Index‘ of the year for revision before blabbering. I don’t know if the Sudanese Ambassador followed the Costa Rican’s advice and checked the index, but if he did, he wouldn’t find a classification of republics based on their association with fruits or vegetables, he will not find there any state marked as a banana or a ‘Onion republic’. For that, he should dig deeper into the figures and even then he is would surprise himself by finding the great Republic Of  Sudan not at the head of the list of banana republics but, probably, at the foot of the of beles republics’ list. The ambassador would have further surprised himself, had he chosen to amuse himself and go  much deeper, by discovering that the country he labeled a Banana republic is not the country hosting the  headquarters of the Inter-American Court of Human Rights only but also the home of the United Nations’ University of Peace.   And now, even after three years or more since that altercation during a security council’s session, The Sudanese ambassador could  have been surprised to find the banana republic of Costa Rica, among few other countries, mostly without armies, standing at the forefront of countries pioneering and achieving a  100% dependence on renewable energy sources. Most importantly, the Sudanese Ambassador may have discovered, had he heeded to the Costa Rican advice, that from the 187 countries listed in the united nations human development index in that year the comical Republic of Costa Rica ranked as No. 69 while the great Republic of Sudan was at a bottom rank of 169.

It seems, however, that the Sudan Ambassador didn’t follow the Costa Rican advice, or, perhaps, he has done so but felt it trivial as to share the news about the status of his country vis-à-vis  “the united nations Human development index”  with his bosses in Khartoum. One is inclined to believe this, by only watching and listening to what the Sudanese officials say about themselves and the rest of the world:

in  November 2012, Mr. Mustapha Al Tayyib, Omar Al Bashir’s maternal uncle, an influential politician and journalist, tried to water down and trivialize the Eritrean people’s struggle. He wrote in the ruling party’s paper Al-Intibaha, that Eritrea was a country exclusively created by Sudan, preparation and cooking! On top of its falsehood the Sudanese presidential uncle’s raving is, no doubt, provocative and obscene, but   provocativeness and obscenity seem to be an inherent nature running in the family! The nephew, president Omar Al Bashir, himself  have been so insensitive as to say this, according to the Sudanese Journalist Sayyid Ali Abu Amna, who related, the later deceased, Hassan Al-Turabi’s narrative concerning Al-bashir’s reaction, when it  was reported to him and briefed on the rape of women in the context of atrocities and war in Darfur: “The black Darfurian should feel honored on being raped by an Arab”. This seem to be the customary obscene demand by a haughty oppressor requiring that his victim should not only keep quiet and mum on being trampled upon, but also feel grateful for the aggression and humiliation she/he suffers. The victim’s emotional state in relation to the oppressor indolence was powerfully expressed in the literature of the Russian novelist Fyodor Dostoevsky in this fragment from one of his novels: ” is it not possible to simply eat me up without insisting that I should sing praising my devourer?“. The same obscenity and indolence is also clearly displayed in the situations of the officials of ” Nevsun Resources”– the predatory mining company, who, besides enslaving the Eritrean youth, is in a thief- fence[v] relation with the Eritrean dictatorial Kleptocracy–,  Mafiosi seeming officials of the company, officials like Serge Solomonogov, the technical service manager, who have the audacity to imply the demand that the Eritrean people should feel grateful for the company’s shameful plunder, exploitation and torment affected on them citing the bogus claim that the company is making the favor of transferring knowledge to Eritreans and training them. Wow! What shameless, audacious ugly grinning faces they have!

[i] From Aldous Huxley’s book “The Human Situation” – the chapter on war and Nationalism.

[ii] The “Stupid War” in Spanish

[iii] This story was told by Ustaz Faisal Babikr of  the Sudanese on-line Newspaper sudnile.com in 2013 in an essay (Arabic) under the title of “The Jurisprudence of priorities: The Costa Rican wisdom”.

[iv] A pejorative term for a country with a Kleptocratic government, often with a primitive economy. Originally the term was used to refer slanderously to any small country especially in Central America that is politically unstable and has an economy dominated by foreign interests, usually dependant on one export  such as bananas. (dictionary.com)

[v]  According to Wikipedia A fence or a receiver is an individual who knowingly buys stolen property for later resale, sometimes in a legitimate market. The fence thus acts as a middleman between thieves and the eventual buyers of stolen goods who may not be aware that the goods are stolen.