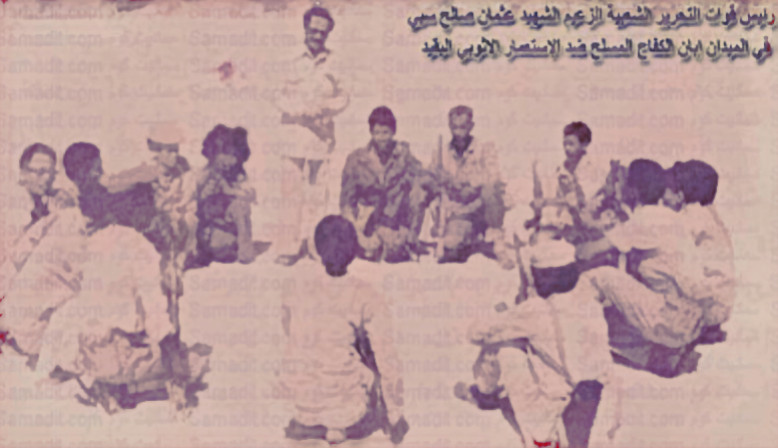 SCENE: Mai Ule (ማይ ኡለ) river and the hills, mountains in its vicinity.

( Sitting under a shed of a tree, THREE young men, no more than twenty three years of age, are seemingly engaged in a serious conversation.  Clad in a semi-military fatigue with a sarong (ኩሽኽ) wrapped around each of their heads, they first reminisced poignantly their experience in Kassala, Sudan in the mid to late sixties, they then went on talking about the recent meetings and conferences within the Eritrean organizations and finally they dwelt upon the apparently insuperable hurdles and challenges that their inchoate organization is facing. Their extended confab, in which the medium of communication was Arabic– Though two of the interlocutors spoke Tigrayt, Ahmed Hiall, an Afari, didn’t — went something like this..)

Ahmed Hillal:  I remember vividly how the ELF fighters referred to each other in Kassala in the sixties during our sojourn there. I still shake my head in utter bewilderment about those days.

Abubeker Mohammed Hassen: Yeah, in those days, they were saying that he is from this zone or that zone. Or, so and so is from Menteqah rabAa (መንጠቃ ራብዓ) or MenteqAa Ula (መንጠቃ ኡላ) or MenteqAa Khamssa(መንጠቃ ኻምሳ) — Fourth Zone, First Zone and Fifth Zone respectively — .

Hassen Mohammed Amir: Those were just another way of designating and identifying a fighter’s region or religion, as simple as that. This is like saying he is a Christian or a Muslim and from the Semhar or Barka or from Hamassien.

Ahmed Hillal: Not only that, the way that the ELF fighters were detailed to each Zone had also a tribal element to it. Though the Eritrean Jebertis hailed from virtually every corner of Eritrea, they were assigned to Zone Three,which was made up mainly of Saho fighters from AkeleGuzai region.

Abubeker Mohammed Hassen: Speaking of Zone Three, I heard a story while I was in Kassala that its leader, Abdulkerim, was quite popular in Senhit region, which was Zone Two. There is a popular song there that goes like — Abdulkerim MetsA Seni Falu — (ዓብደልከሪም መጽኣ ሰኒ ፋሉ) …. Here comes, Abdulkerim, the harbinger of good…. It is said that it is the favorite tune of the Bilen girls (ኣዋልድ ብለን) who work in Keren’s frankincense share company, commonly referred as Sheriket Luban(ሸሪከት ሉባን).

Hassen Mohammed Amir: Doesn’t that attest to the fact that our civilian population’s national consciousness has surpassed the sub-national tendencies that has grievously constrained the ELF fighters and leaders.

Abubeker Mohammed Hassen: Not only that, the way the ELF forces were divided and assigned into many zones by the leaders in the supreme council is to enable them in maximizing their social base or constituents and to garner more money through taxation thereby increasing their chances of grabbing more power.

Ahmed Hillal:  We thought that we have overcome all those backward tendencies and they were behind us when we left the ELF and made it to Dankalia. But, alas, you saw what has transpired in Sodha Ella (ሶድሓ ዔላ) when our forces were split into two based on  regional lines.

Hassen Mohammed Amir: Though it appeared that the difference was on military strategy at first, it didn’t take too long for one to see that the difference  was of a regional emanation. However, thanks to our recent Meeting at Embahara (ኣኼባ አምባሃራ) where both Umaro (ዑማሮ)and Abu Tiyara (ኣቡ ጥያራ) agreed not to seek a leadership position, we were able to iron out our differences.

Abubeker Mohammed Hassen: Indeed our Embahara meeting was quite a success, no doubt about it. We have prevailed over the barriers that seemed insurmountable even as we trekked from Dankalia all the way to Gedm (ገደም), Semhar, and then to Ad Shumma (ዓድ ሹማ). But, the divide between us and our brothers in the Selfi-Natsnet(ሰልፊ ናጽነት) group is NOT getting narrower. The antipathy between us and them is quite palpable, even after they held their Akheba Tekhli(ኣኼባ ተኽሊ).

Ahmed Hillal : We have to be patient with them and try to understand their angst. The mistrust they have been evincing is the result of their failure in fathoming that we, like them, were equally victims of the misguided policies of the ELF leadership.

Hassen Mohammed Amir: The contrast between us couldn’t be more stark. They, The Selfi-Natsnet group are Christians and we, Popular Forces — The Sodha Ella group — are all Muslims. We have to overcome this glaring divide, if we are to achieve the unity of this organization. After all, we split from the ELF because of our adamant opposition to the divisions within the fighters in the ELF.

Abubeker Mohammed Hassen: What they –The Selfi Natsnet group — are failing to see is the fact that all of the ELF forces are literally arrayed against us in that they are intent on in seeing our complete liquidation. Haven’t they read the recent declaration from ELF’s first congress with its dire ultimatum. Now they are saying that ELF’s elite units, The Aremrem(ዓረምረም) , are coming after us. On the other hand, the ELF is calling on the Selfi-Natsnet group to come to the table in order to resolve their differences and to lodge their complaints. We are not given those options. Ultimatums and only more ultimatums.

Ahmed Hillal: Let us hope that the meeting in Beirut, Lebanon, will come out with some solutions that will enable us in unifying the three groups of The Popular Forces. You may recall that Osman Saleh Sabe (ዑስማን ሳለሕ ሳበ) , Ali Said Abdella (ዓሊ ሰይድ ዓብደላ) , Isaias Afwerki (ኢሰያስ ኣፈዎርቂ) , Mesfin Hagos (መስፍን ሓጎስ) and the leadership of the Obel (ዑበል) group are still in Beirut.

Hassen Mohammed Amir: Though we have covered many issues and tackled many problems in our first and founding congress of our party, The Eritrean Peoples Revolutionary Party, (EPRP), which was held just a couple of months ago in Gedem,  the internal problems and issues within the Selfi-Natsnet group were not dealt with and addressed extensively and thoroughly. Without knowing the crux of the problems that are bedeviling this group, our effort of unifying our forces will be fraught with obstacles.

Abubeker Mohammed Hassen: The Selfi-Natsnet Group seem to be more interested in procuring rifles and guns such as AK-47s. They think that we have a boatload of them and we have tons of ammunition boxes squirreled away and hidden in caves. They don’t seem to understand that there is a paucity of armaments in our group. I can’t understand why they are making a stink about the fourteen AK-47s we gave them. They are saying that Umaro (ዑማሮ) promised them that they will get forty AK-47s and they feel that they were shortchanged or cheated.

Ahmed Hillal: Our brothers in the Selfi-Natsnet Group didn’t have enough rifles and ammunition. Some of their fighters were carrying sticks in lieu of rifles. But, one would think that the recent operation they undertook in Asmara where they raided the Finance Department  (አንዳ ፍላንሳ)
ammunition depot would have ameliorated their dire need for rifles. The operation was a success. They were able to get some rifles, though not AK-47s, they are rifles nonetheless.

Hassen Mohammed Amir: Still, they shouldn’t make such a great fuss about this issue and should rather concentrate on the bigger picture.

Abubeker Mohammed Hassen:  Quoting liberally from the works of Ibrahim Frantz Fanon, he expatiated extensively the after effects of colonialism and the arduous struggle that must be waged in raising the consciousness of all the fighters and the Eritrean civilians at large.  He told them that through a protracted struggle, the unity of the Eritrean fighters and the victory of the Eritrean revolution was near a certainty.

( While they were still engaged in their conversation, Yassin Dehab (ያሲን ደሃብ) and another fighter from the sentry post came to them. They asked, if they can see and speak with Ahmed Hillal immediately.)

Yassin Dehab: First the fighter who was on guard told me and then I confirmed it through this binocular that we saw some fighters heading our way. I am not sure if they are our comrades or that they could also be ELF fighters.

Ahmed Hillal: (In a hurry and taking brisk steps) he led the two fighters to the sentry post. After a minor adjustment of the binocular, he could see a group of fighters heading towards their post. He zeroed in the fighter leading the group. Before too long, he was able to recognize the face and the gait of that person. Coupled with the previous information he has had, he told Yassin Dehab and the other fighter that, these are our comrades coming to join us.

Yassin Dehab: Oh, really? Who are they?

Ahmed Hillal: That is our Engineering Squad — MesriE Handessa — (መስርዕ ሃንደሳ) led by Sulieman Hindi. It is he who I have recognized through the binocular. They were around Massawa, Emberemi (እምበረሚ) area, to be precise. Now they are heading our way to join us.

Ali Higna (ዓሊ ሒኛ): I hope they are bringing some of the provisions we have been waiting for and some other stuff that are of vital importance to us.

Ahmed Hillal: More than that, I hope they  were able to thoroughly scout the areas and to have conducted a good reconnaissance  on their way here,  stopped by those villages and made contacts with the civilian population there. And, I hope also they were able to meet with our platoon (ጋንታ) stationed in Gedem.

( The Engineering squad led by Sulieman Hindi, after accomplishing its tasks around Emberemi, it headed directly to Gedem where it stayed for a day. The commander of the platoon in Gedem, Saleh Tetew (ሳልሕ ጠጠው) had an extended discussion with Sulieman Hindi. After a lengthy journey from Gedem, they first stopped at Weqiro (ወቂሮ ). They then trekked to the villages of Ad Ele and Ad Shumma (ዓድ ዕለ and ዓድ ሹማ). After that, they footslogged to Shebah (ሸባሕ ). A day or so later, they arrived at Mai Labba (ማይ ላባ) — the ephemeral river of Mai Labba– . It was here that they came across some shepherds and some farmers who came from the Eritrean highlands. They were able to gather some invaluable information. Finally, the Engineering Squad has made it to Mai Ule [ማይ ኡለ]. )

( From the shed of the tree, Sulieman Hindi, could see that the commander of the platoon at Mai Ule, Ahmed Hillal, beckoning to him. He started walking towards the tree to join the THREE fighters sitting under its shed.)