Eritrea: Heroes Made of Steel (By FantiGhana)

Posted on July 3, 2014 by awatestaff in Articles 39 Comments 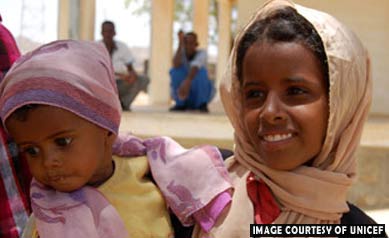 The following was written by FantiGhana, a commenter at Awate Forum, two months ago. We liked the short story so much we thought of sharing it with you. FantiGhana, thank you for the story and noble feeling.//Awate Team.

Between 1979 -1982 I used to work for a Swedish-run clinic called Sudan Council of Churches. Well, in the Sudan. I was one of eighteen carefully selected health workers who shuttled from one refugee camp to another to diagnose and treat tuberculosis patients. We were known as “The TB Team.” The last and largest refugee camp I worked at was called UmseKaTa (0). My main responsibilities were to register new patients, home-visit existing patients (usually to check for members of the family for illness, but to also ensure that patients were taking their medication on time) and to give an injection when there is no one else designated.

One Saturday morning, a beautiful young lady shows up at the clinic carrying a child who was crying incessantly. As I was walking toward her, I asked why the child was crying. With a hint of a smile she replied, “I am here for you to tell me why she is crying.”

Instinctively, the word that flashed in my mind was ,“Tefaena.” But, sheepishly, I said, “I stand corrected, let me register her name quickly and we go from there.” She agreed. The adrenaline from being logically slapped still rushing in my vein I politely asked what the baby’s name was. She, quickly, answered, “Africa!”

I froze for a second, but I also thought she must have misheard me, so, pointing my pen toward the child, I repeated the question, and she repeated her answer, slower this time, “her name is Africa Selah.” I was shocked, intrigued, ecstatic, and somewhat envious.

My all time favorite name until that moment had been ‘Ethiopia’ given to an Eritrean woman. So, the ‘Harambe’ in me, still in excitement, I asked why in the world she named her child “Africa.” It was not me who named her, it was her crazy father! She replied.

I said, “it is the most beautiful name I have ever heard, and please, please, you must introduce me to this crazy father with such a creative mind.” She assured me that he will be happy to, and, sweeping the air with her hand toward my direction to indicate all the employees, she added, “he is like you anyway.”

After a brief do-you-believe-me-yes-I-do stare at each other, we both turned our attention to Africa Selah.

Africa didn’t look ill to me, but I decided to ask for malaria and tuberculosis symptoms. As I was making notes, one of our half dozen patients who were waiting for a lab result (I am a little hazy on who it was, so it could have been one of my colleagues too), accurately diagnosed Africa just by looking at her and said, “absolutely nothing wrong with her, but she probably needs some water to drink.”

The patient was correct! Africa’s mother’s frantic reaction to fetch water, including quickly pulling one of her breasts out, was indescribable in any language. We, the whole people in the clinic, laughed until we were sick. You see, we all knew that the mother should have known to begin with, but we also knew that this was her first child and that she was very young herself, about 17 or 18 years old.

So, with eye contacts only, we all agreed that she should be forgiven. At the same time, I was the “Hakim,” I should have known as soon as I saw her, but I am a man, a very young man at that, so I was automatically forgiven too.

Except for the teary eyes and heartfelt laughs, we all shared that incredible moment in silence. The only sound came from the next hut when one of my colleagues shouted in Amharic “ere ebakachuh betun satefersew telo wuha sTwat” (3)!

Africa’s mother and I agreed to seal our friendship in front of everybody with the following terms: she made the best coffee I ever had when I visited their home later, and I came up with a convincing story about the nature of her visit to the clinic that day, so that “Selah won’t laugh at me for a month!”

Two hours later, Selah came to invite me to his home for lunch. Stretching my hand to greet him, I rhetorically asked, “you must be Selah.”

He replied, “Yes, I am, and you must be Girmawi Kedamawi.”

What? Well, the way my wife is preparing for your arrival you better be Haile Selassie or something! He couldn’t wait to find out what kind of favor she owed me. His smile and his sense of humor were disarming, and I was tempted, but I wanted to know about the coffee first, so, I asked him if she was making coffee too. Mr. Selah shoots himself on the foot by telling me that, “she is not only making coffee she even bought new coffee cups!”

It turned out that Selah was one of the very few survivors of Ona (meeting Ona survivor in those days had a special effect on me, but that is a story for another time). As you will learn shortly, Selah turned out to be a uniquely special person. He is Tigre-Eritrean who spoke Amharic fluently, and I am an Ethiopian Christian who could read and write Arabic (unheard of in those days), so, we became friends instantly. I, of course, couldn’t wait to ask him the question of the millennium, “Why did you name your daughter Africa?”

In the 70s, some Arab countries were kind enough to give student visas to the few Ona survivors, and Selah was one of them. Upon his arrival in Syria, he was standing behind a Sudanese traveler at the airport check out, and he noticed one of the Syrian guards telling the Sudanese passenger to pass through without searching him. However, the same guard searched Selah from head to toe before letting him through. Selah is very light skinned and fluent in Arabic who could easily pass for an Arab, but up to that point Selah didn’t make an issue of that little episode until what he heard next.

A second guard, who was observing the incoming passengers along with the searcher, pointed out to his colleague that he forgot to search the previous passenger. “No I didn’t forget to search him,” he replied, and with the most arrogant tone you can imagine he continued, “I just didn’t want to touch that Abid” (Slave).

Selah’s world turned upside down. He is too just-minded to ignore that, but too helpless in a foreign land to do anything about it either. He thought about it carefully, and he made up his mind to go back to the Sudan!

Selah came back to the Sudan with no real future to look forward to. He made that incredible sacrifice for his principle and integrity of what life should be about. No trace of any regret or anger! To him it was simply a matter of principle and the only thing one must always have. I tried to advise him to take his family and go back to Syria, if that visa was still valid. I was unsuccessful.

“SaHbi” (my friend), he began, “I can’t possibly live with a society that thinks that way! I understand that all Syrians may not be like that policeman, but nonetheless, I would always be looking for a negative attitude in every Syrian. Believe me if you always look for a negative attitude you will always find it, and that means you will die slowly, from the inside. Here I may be poor but I can laugh and live.”

Oh my, oh my! I was so mesmerized and didn’t know what to say to him next. You see, in those refugee camps we were supposed to be the miracle workers. Most of the refugees knew that we were there not just for the salary, but because we cared too. They see it in our eyes, in the amount and kind of hours we spend with them, and in the extra services we sometimes provided. But in that moment, sitting across from Selah, I felt like a mouse staring at a giraffe.

Those of you who are familiar with what life meant in the Sudan during those days, I am sure you can imagine the magnitude of Selah’s resolve. Nonetheless, life continued for Selah. He met his beautiful wife, and they were blessed with the most beautiful child they ever saw, and Selah named the child “Africa!”

Brothers and sisters, I was once fortunate enough to laugh with my friend and my teacher Selah.

At this stage of Eritrea’s never ending drama, in which the actors are now masked, I feel your pain, I understand your agony, but, please, please, do not ever despair. Not even for a moment. Eritrea is not made of clay. She is made of steel. She will survive, and, yes, she will come back roaring!

Ref:
(0) I saw some people misspelling it Umsagata on Google, but it is the same place.
(1) Health worker like us or crazy like us.
(2) I meant he is educated like you. He is your type.
(3) Please somebody hurry and give her some water before she demolishes the hut.