Challenges of Justice & Democracy In Ethiopia 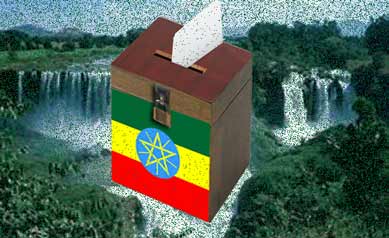 Voices of justice and democracy are challenging modern Ethiopia. The adoption of “democracy” in the system of governance is becoming highly volatile in today’s political life. Despite its theoretical connotation and rationale, its notion has been devalued as a simple commodity that wishy-washy politicians sell to ordinary citizens. Instead of a justifiable system of governance, it became a marketing tenet of false promises for grabbing boundless power. All false convictions aired become just instrumentation tools to scoring high number of voters. Consequently, ordinary societies lost its true essence in practice.

Ethiopia’s case is not an exception. The country is supposed to be democratic as the 1st Article of the Federal Government Constitution indicates. Although Article 30(1) states it is a given right for every person to assemble and to demonstrate together with others, peaceably and unarmed, the way the federal government responds is against that. As a consequence, legitimate grievances carry the potential of becoming public disobediences, chaos, and lawlessness across different federal states. Grievances are being expressed through the hardest way possible that demands sacrifice by many innocent citizens.

The cause of today’s social and political unrest in the Federal Democratic Republic of Ethiopia (FDRE) seems to be intricate. It demands extensive political strategies to ease and resolve the hyper tensioned and alarmingly vague situation. Though a distant observation, it is safe to say that confidence on the existing political system is gloomy. If it can be exploited for a better end, delving into the principles of democracy and loyalty, to the rule of law that respects democratic rights, is the best action.

The way the federal government behaves against anyone who raises a voice of justice is increasingly becoming worrisome. In every protest, innocent people are dying of direct gun shots. There is no justifiable reason for such barbaric acts to control the riots and disobedience. The pretext of national security and conspiracy of external involvements should not justify these actions. In fact, they are considered as crimes against humanity.

When democratic rights fall at risk, evolution of this once monarchic and totalitarian country into democratic governance system is hard to be attained. What makes it worse is that the second largest populous country in Africa (more than 90 million) and one of the poorest countries in the world, economic and social prosperity will be hard to imagine without respect of rule of law. In fact it is becoming a major concern among those who believe on Ethiopian revitalization and democratization process.

Challenges of Article 39 and Democratization

Since the chaotic social and political unrest of 2015 in the Oromia region, and now (2016) the wake-up of Amhara, the echo of justice is vibrating throughout the country. These people are showing their valiant stance of demand for fair equity of power distribution at the federal level and a guarantee of acceptable margin of self-rule on state level administration. Moreover, some people, like Wolkait, are demanding relocation of their state administration by claiming their identity traits, Amhara. The rejection of the Addis Abba masterplan expansion by the Oromo nationals, Wolkait identity issue, the Amhara claim of power monopoly by one ethnic group (the Tigres), the Afar and Tigray people’s democratic movement are, some of the prominent examples that dominate uncertain and sensitive political landscape.

Generally speaking, these political developments do not contradict with Article 39 of the federal government which grants nations and nationalities the rights to secede. Although looking back to the early 1990s Article 39 had justifiable reason to be included, it was a shortsighted article that conceived a huge potential of Ethiopian fragmentation. The then successful coalition force of EPRDF was composed of five revolutionary fronts that had a primary objective of forming an independent country of their respective nationalities. If Article 39 was not included, it could have been difficult to form a united country called Ethiopia, and it had its own merits for a short term relief. But this didn’t serve longer as a unifying tool any longer. With increasing popular feeling of political marginalization and public pressure for economic and social prosperity, the only soft target is to hit back on the pillars of Article 39 and force the federal government to loosen the grip that glue the states. The Oromo liberation front and the Somalis regional issue comes as spot cases.

In fact, when one delves into Article 39 thoroughly, it basically gives an opportunity of fragmentation under a pretext of democratic choice of the people, whatever the motive. Literally speaking, social groups of Ethiopia have an equal chance of claiming territorial state that can produce more than 80 ethno-centric states. Although secession is hard to achieve in modern Ethiopia in a short-term political process, in a country that has ample experience of revolutionary turmoil, the issue of nations and nationalities can explode leading to civil war. The expanding political freedom among ordinary societies is pushing for a radical change in the system of governance and more political accommodation. The missing link here is appropriate federal and state democratic institutions that provide timely responses of public concern. The question is therefore, “is the government in a stage of building timely and conducive environment for political rights or will it continue to act in such a horrific terror of brutal killing and squeezing political freedom?”

Ethiopian voices are engaged in a discourse of democratization and that doesn’t arrant panic because these voices were oppressed for too long. The seismic jolt created along these waves cannot be concealed neither through guns nor through blocking of social media outlets. What is needed is accommodation, listening, being responsible, tolerant and transparent, respecting rule of law, justice, and choices.

Relatively speaking, Ethiopia has come a long way in the democratization process compared to what it was before. In spite of the very few power-mongering individuals and diminishing partisan elements with the defunct monarchist mentality, Ethiopians today care more for economic prosperity, democratic rights and inclusiveness within the existing diversity. The late Prime Minister Melles Zenawi plans for ending poverty through education is a prime strategy of modern thinking through which the Ethiopian nation can strive and prevail against all challenges.

A thorough observation on the Ethiopian economic, political and social developments indicate that their registered outcome is optimistic. I believe that EPRDF is an emancipator and its political path succeeded in eradicating fear from its own people. Unlike before, when the Derg ruled through RED TERROR, Ethiopians have reached a degree of fearlessness that they are openly opposing government policies and system of governance.

The change in the Ethiopian political landscape is immense. Nations like Oromos, who were treated as mere servants in the past with no say even on basic human rights, are now loudly campaigning for justice and equality. The Amharas who took it for granted that their powerhouse was the source of rulers of greater Abyssinia, have now come to terms with political representations, and fairness of justice. The Tigres, though they still control the center of the government, are equally demanding more democratic freedoms. The same can be narrated about Afar, Somalis, and Southern Nationalities, Benshangul, and Harari nationalities.

These deep rooted cumulative grievances date back to the era of former leaders. They are now loud and widespread because of the relatively expanding democratic freedom, changing economic status and global openness; every raised voice is becoming stronger and louder producing waves for the highly needed change.

The existing political turmoil might seem destructive in a short term view. It could be dangerous if the federal government tries to silence it by using aggressive force.  Nevertheless, if minimum and basic standards of democratic rights of societies and individuals are observed, today’s voices will transform the old mentality of governance and consolidate Ethiopia further.

The federal government needs to be wise on resolving the current trend. It is the harvest of a ripening struggle of the oppressed people. If challenges seem tougher, it is because they are passing through the last bottleneck of obstacle towards greater freedoms and transparency.

When Eritreans called on the United Nation Commission for human Rights group to investigate crimes committed against them, the Ethiopian government immediately endorsed the mission. Since the commission of inquiry (COiE) was refused permission to visit Eritrea, its work became more challenging and it was forced to collect testimonies outside the country. Ethiopia was on the forefront insisting that the UN to pressure Eritrea.

On the contrary, when Human Rights groups wanted to see what is currently happening in Ethiopia, it is difficult to comprehend why it is refusing them permission to do so. Comparing that to its position in regards to Eritrea, it is a paradox and a double standard. If the country is committed to International treaties, Human Rights observers should be allowed to conduct their work and see if individual rights are being observed or not.

It is wise to differentiate between how the Eritrean and the PFDJ think. Without forgetting pre 21th Century historical legacies, Eritreans have limited information about today’s Ethiopian internal political cartography. To the majority, Ethiopia is perceived as the motherland of Haile Selassie, Derg (Amhara), and Woyane (Tigray). These leaders are remembered as archenemies of Eritrea. It is hard to figure out what is within Ethiopia’s politics and social composition. Even the term, “every Ethiopian” is narrowly demarcated to include the above mentioned nationalities, and such political blindness is imposed and perpetuated for a reason.

To combat external security threats, Eritrean conducts proxy war via rebel groups of the antagonizing country. This kind of strategy helps it from involving itself in a direct war. Since its independence, Eritrea has been involved in Sudanese internal problems to halt threats from Sudan, it supported Al-Shabab in Somalia, and is continuing to arm and train a number of Ethiopian opposition forces. For example, there are more than ten rebel groups who are stationed in Eritrea. The engagement is symbiotic. Eritrea provides necessary support for rebels in return the rebels attack Ethiopian government. These rebels conduct occasional military operations inside Ethiopia that put security and stability in danger.

It is wise to recap this article by citing Article 10 from the constitution of Ethiopian Federal Government which reads:

“Human rights and freedoms are inviolable and inalienable. They are inherent in the dignity of human beings. Human and democratic rights of Ethiopian citizens shall be respected.”

The above quote calls on the government to respect the rule of law. It must be recognized that voices of justice and democracy always come in one package-you need to have a voice in order to enjoy justice. It cannot be concluded that today’s Ethiopian problems are solely related to Article 39. However, the article provides an open environment of manipulation. In its current context, opportunists can use it as a means of power struggle or for dividing the country into smaller states.  This being one side, Article 39 has serious shortcomings that need to be reformed. Nevertheless, the people of Ethiopia should not be fooled again. Opposition groups who are working with neighboring countries should refrain from being mercenaries to destabilize their own country.

A united Ethiopia is a blessing, first for Ethiopians, and then to the region at large.