Eritrean Catholic Bishops Ask: “Where Is Your Brother?” 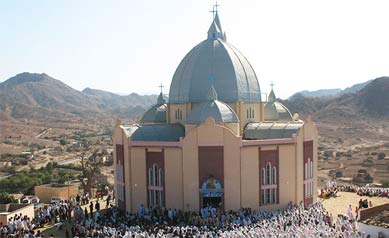 In the 38-page letter that the Catholic Bishops from the eparchies of Segeneiti, Asmara, Keren and Barentu wrote, they described the situation in Eritrea and appealed to the faithful to find solutions to the economic crisis, excessive exile, and other limitless predicaments from which Eritreans are suffering and are caused by the “no peace no war” situation prevailing in Eritrea.

The title of the Bishops’ letter, “Where Is Your Brother?” is borrowed from the Holy Bible: it emphasizes sympathy and urges the faithful to find a solution for their problems. The letter was issued on the occasion of the 23rd anniversary of the independence of Eritrea which was celebrated on May 25, 2014.

The letter bears the signatures of the following bishops:

Citing the Lampedusa tragedy of October 3, 2013, and the fear and terror it created among Eritreans, the letter states, “Since the environment we are in aggravates the situation, instead of finding solutions to prevent similar incidents from being repeated, those of us who made the the disaster facing our children a matter limited to conversation and news are facing a disturbing question that is making us sleepless.”

“Where Is Your Brother?” addresses all major issues facing Eritreans, including the moral and psychological damage inflicted upon the people; the poor educational status of the country; lack of rule of law; weakness of spirituality; economic hardships, and disasters befalling the youth in their attempt to flee the situation at home, and facing great risks on their journey in the deserts and seas. It also raised a multitude of social, spiritual, economic, and legal issues.

The letter also addressed the lack of freedom of speech in Eritrea and said because of that, the youth are fleeing to, “peaceful countries, to countries of justice, of work, where one expresses himself loudly, a country where one works and earns.” Answering a rhetorical question, it explained, “There is no reason to search for a country of honey if you are in one.” It added, “Instead of Eritreans aiming to leave their country, those who are in the Diaspora should have returned….it is not rational to simply ask why our youth are leaving to foreign countries.”

Addressing the importance of the family unit, “Where Is Your brother?” explained, “on top of the crisis of people leaving their country, the family unit is fragmented because members are scattered in [national] service, army, rehabilitation centers, prisons, whereas the aged parents are left with no one to care for them and have been spiritually damaged. And all that combined is making the country desolate.”

The Bishops appealed for human treatment of prisoners and said, “All those who are arrested should first be handled humanely and sympathetically, and then, based on the accusations against them, they should be presented to a court and to resolve their cases, and since any entity that stands for fairness and justice, for true liberation, mainly aspires to be led by a constitutional law, they should pay serious attention to this issue.”

Fourteen years ago, on the occasion of the tenth anniversary of Eritrea’s Independence Day on May 24, 2001, Abune Zekarias Yohannes, Eparch of Asmara; Abune Lukas Milezi, Eparch of Barentu; and Abune Tesfamariam Bedeho, Eparch of Keren had issued a Pastoral Letter of Eritrean Catholic Bishops entitled, “God Loves This Country.” The message touched on many aspects of Eritrean situation including the Ethio-Eritrean border; the state of the spiritual life of Eritreans, pluralism, election, aids virus and a host of other issues. Awate.com had presented scanned images of the part that deals with reconciliation out of the 39-page message.

Excerpts from “God Loves This Country” of 2001

Reconciliation is not just with the enemy; we must reconcile with ourselves as well. To assess how far our strength can carry us, we must accept that, being human, and while exhibiting traits and behaviors of human beings– strengths and weaknesses, the good and the bad–we should always pursue moderation.

Our society, as well, should carry a deep and broad spirit of reconciliation, forgiveness and unification. All efforts must be pursued to expand reconciliation and harmony to the segments and sectors that have differing views. While being one people and one society, and in order to live up to the concept of “One People, One Heart”, we should abandon the spirit of “us” and “them” and unify all members of our society. Otherwise, “a nation divided cannot stand (nor be fortified).” Lucas 11:17; Mathews 12:25.