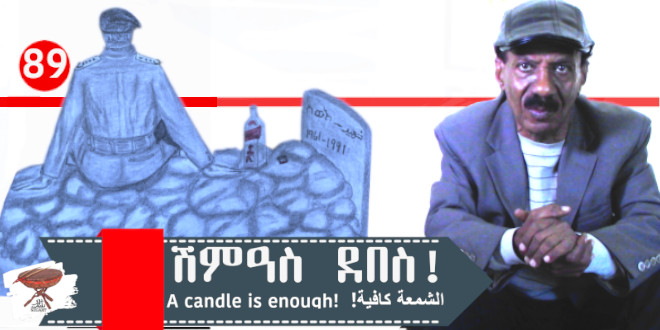 About 400 years before Christ, Socrates was jailed accused of many things among which were corrupting the youth of Athens and not believing the gods of the time. His friend Crito wanted to bribe the guards for him to escape. Socrates refused the offer because he didn’t believe injustice should be fought by injustice. He was sentenced to die with poison.

In a way, Socrates is the first martyr who died for his views. He could have escaped but he rejected the idea believing that, “philosophy is training for death”.

About 170 years ago in Madagascar, modern Malagasy, there lived a Queen with a very long name Rabodoandrianampoinimerina. She was as isolationist as the PFDJ who couldn’t maintain a sane foreign relation policy with the world, particularly Europe. The queen launched a campaign to eradicate the Christian population of the Island and used a traditional practice of fanompoana (forced labor as tax payment) to extract work from the people—just like SAWA for public projects and had a large standing army from an ethnic group. War, disease, and forced labor wiped out about half the population of the country.

Let’s see the evolution of the concept of Martyrdom in Christianity and Islam.

The origin of the word martyr is Greek, and it means “witness,” similarly in Arabic, the contemporary word “Shaheed”  also means a witness. The first Christians who bore witness to the teachings of Jesus were persecuted—and they were tried as witnesses to incriminate themselves.

In ancient times, people mostly died defending their religion, that was the main thing they were prepared to voluntarily die for. And people venerate and remember those who give up their lives for their religion.

In the Eritrean case, the concept of Shaheed, Sewoue’, martyr became synonymous with the Eritrean struggle when the people chose to sacrificed their lives for the cause of freedom and liberation. It was a selfless act of bravery and courage, and as such it has shaped our collective psyche. But elsewhere, it has been abused and corrupted by killers and haters who have no respect for life. And we believe that anyone who gives his life in a just struggle is considered a martyr.

The Arabic word Jihad means gedli in Tigrinya and struggle in English. The word Jihad was fine with the West until the Afghan war against the soviet Communist ended successfully. Thereafter, national interest changed faces, and overnight, the much-loved Jihadists of Afghanistan who were supported by the West and the Muslims alike became the reincarnation of the devil. The restless youth who were trained by many countries, armed to the teeth by the USA under Reagan, and financed by the Gulf Arabs, turned against their sponsors and wreaked havoc all around the world and spread terror, which was met with equal or worst terror by the West. The destruction of Iraq and the dismantling of its army led to offshoots of modern-day Jihadist who grew to become ISIS and associates. Ironically, they called themselves “Shaheed” giving a bad meaning the noble term that many anti-colonialism and occupation used—including Eritreans who gave about 100,000 martyrs to free their country from the Ethiopian occupation. But in Eritrea, the concept of martyrdom, in its secular face, was well established when the ELF launched its struggle against Haile Selassie’s regime in 1961.

Last week social media platforms many peoples of the world who remember their martyrs dearly. Importunely, since the last two or three years, our martyrs who are elevated to the level of saints in our collective memory, have been insulted, belittled and dehumanized.

One can have a different view about martyrs, but expressing that view should at least be civilized, decent and not vulgar. Freedom of expression does not include being vulgar or indecent, but some can only express their views only in foul languages and laced with racism and bigotry. Traditionally, if one encounters an entourage of a funeral, they take off their hats, or stand up and stay still, for the respect of human life, even if the dead was a known scoundrel. That is decency and civilized culture. What do we make of the vulgar, indecent speech targeting our martyrs, a talk that is all hate and spiteful?

I was disappointed because from all the many postings in remembering our martyrs last week, I saw a negligible number that suggested a way to confront those who desecrate our martyrs, knowingly or unknowingly. Here is what a young man had to say:

Indeed, how do you uphold the goals of our martyrs? And here I will propose one little solution. Anyone who posts a disrespectful post against our martyrs should be kicked out of the list, be it Facebook or the like. Just kick them out and let them go back to their dungeons and shout their disgusting vulgarity together. But this is not just that, I will post and let you know whom I kicked every time I do so. Please follow the same plan to fumigate our internet spaces. Kick and report publicly who you kicked out—shame them. Walk the talk and show them some decent fight.

The second thing I would like to discuss is the way we personify or depict our martyrs. Sometimes we forget they are human beings, not supernatural. They lived their lives like any normal person, they had families, friends, neighbors, people they liked, they hated. they had a natural interaction. They had faults, gaffs, jokes, anecdotes, experience that we fondly remember but  are afraid to share publicly. and that stripes them of their humanity. I believe we have to present them the way we remember them as mortals albeit, courageous, brave, dedicated, and noble type of people. I believe it’s time we humanized our martyrs.

Most of my friend who were martyred had different characters and I would like to share some of what I remember of them. For today let me mention a few of childhood friends, one of my closest friends Beshir Neberay, my classmates, Qebrequdus and his brother Gebreleul Daniel, Yassin Abdalla.

Of course, the naughtiest was Gebrequdus and there is one incident that still crack me up whenever I remember it. That was the time when girls’ skirts were going above the knee and they had to always hold their skirts so that the wind doesn’t blow it open. Once waiting for the bell to ring after break, a few of us where sitting outside the class and looking at a group of girls who were chatting on the distance. A strong wind blew and surprised the girls—many skirts went a little up. Immediately Gebrequdus wanted to tease the girls and shouted, “the red panties…” when in fact the skirts were intact. All of them held their skirts as if to stop their red pants from being exposed, when nothing was exposed. We had a laugh like never before.

Incidentally, his martyrdom was the first I experienced, and I was so sick and couldn’t eat properly for days throwing up anything I ate or drunk.

That is the kind of fond memories I have about Gebrequdus and no one can take that from me. He was a human being, naughty, witty and no one wanted to be a target of his sarcasm. But he was a beautiful fun person who fell for the Eritrean cause that the few idiots are degrading. Skanks are not worthy enough to belittle our martyrs.

Yassin Abdalla was the always smiling and person known for his extreme cleanliness. He seemed as if he would be stained if touched. Always clean dressed in washed and ironed clothes and didn’t seem to wear a cloth for more than one day at a time. He was so careful about his hygiene. Yassin didn’t care when many were bullied into wearing dirty clothes to blend in with the school bullies.

Of all the things I worried about how Yassin was going to cope with the dirt after joining the struggle. But my personal worries were snakes, they scare the hell out of me—but Yassin, beneath all the soft looks was a man made of steel. He graduated from the military academy in Iraq and returned to the struggle and later on he fell in Dankalia, heroically. See his picture and his trademark smile.

Beshir Neberay, well, that would be many episodes and I will not even try to tell it here—though he is occupies a big chunk of my book, Of Kings and bandits. One episode is too short to recount my adventures, escapades, daring (maybe embarrassing) moments with Beshir.

When I was in grade 2, I saw a martyr for the first time. The Ethiopian army had his body hanging from a pole. Then. I saw five hanged at the Serawit’s favorite corpse display area, ironically at the grain market, then six, then 21–the martyrs of Mehlab, who were in the village when a spy informed the commandoes who caught them off guard. All were killed and their bodies displayed, at the grain market.

By then I was used to the smell of the dead—and every time I smelled DDT, it was the smell of martyrs in my mind. That is because the army were careful not to offend our smelling senses and lavishly sprayed the hanging bodies with DDT to kill the smell! From then on, I thought that was the smell of a martyr. Whenever they had bodied hanging, I was at the grain market to watch—my fathers business was only a block away.

Next time I want to talk about the 596 villagers who were massacred by the Ethiopian forces—I will also try to squeeze the scene of the martyrs killed in Mehlab.

Finally, let’s remember our martyrs with the respect and honor they so well deserve. May their sacrifice inspire us forever to serve our people, may their dedication and resilience light the path of struggle for us. May we be decent enough to recognize the ultimate price they paid and how they laid the example for the love of freedom and its price, and noble ideals. They sacrificed their lives but didn’t expect anything in return. They loved themselves like anyone else, they loved their relatives like anyone else, but they loved their people , collectively, more than anything else, and they proved that with their blood, flesh, sweat, limbs and lives. And we, knowing the heavy price they paid, must be certain, very sure that a bright dawn with soon break in Eritrea Eritrea. A dawn of peace, stability and prosperity, Eritreans will be liberated from the shackles of the PFDJ and the memory of our martyrs will always fuel our quest for a better life. Let the rooster crow. Let a million roosters crow. Let all the roosters of the world crow. When Dawn breaks in Eritrea.