Home / All / Abiy Ahmed and the Return of Theocracy to Ethiopia 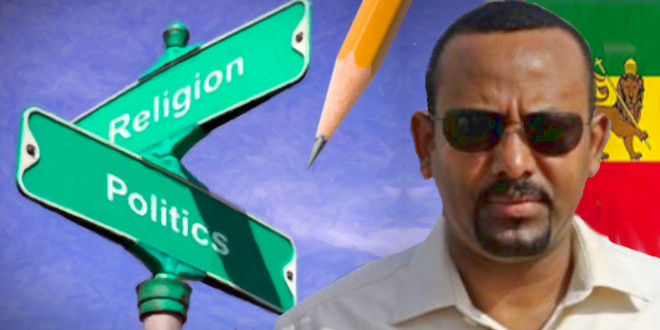 In modern history, Ethiopians and Eritreans went through decades of violent confrontations. In 1991, the pre-final confrontation between the two governments ended with the removal of the Derge regime, and both countries breathed a sigh of relief, believing the bloodshed, the injustice, and the disrespect of citizens would be over. And they hoped, finally, the two countries would usher an era of peaceful coexistence, an era of prosperity, and the end of bloodshed.

For ten years thereafter, the two governments lived through an exclusive and an uneasy relations. But in 1998, in a final showdown, the dishonest, mischievous and exclusive relations between them blew up in the faces of their respective citizens. Two years of bloody border confrontation later, the border between them became a replica of the tense Northern and Southern Korea 38th parallel border. Those who were supposed to be the beneficiaries of the result of the long struggle, those who paid for it, found themselves in the same spot they departed from decades earlier in their quest for freedom and justice. However, the major losers were Eritreans who were betrayed by their liberators-turned-oppressors, the PFDJ regime.

But despite the hiccups, Ethiopia steadily continued treading on an aggressive and  ambitious developmental road as Eritrea remained stuck in quick sand, on a standstill never improving on all aspects of governance, freedoms, justice, economy and social developments.

It was in such a situation that the region welcomed 2018.

In April of that year, amid an impressive fanfare, Abiy Ahmed became the prime minister of Ethiopia. He was immediately perceived as a peacemaker, a liberal and a forward looking leader with a compassionate personality. But to the dismay of many, it didn’t take him long to reveal his showy character, more interested in promoting himself like a Hollywood actor.

He was too fast to the extent of appearing as a reckless leader. He revealed that his primary goal was to dig the graves and exhume the remains of crowds who idolize Haile Selassie as well as the Derg regimes. He is still trying to breathe life into the appendages of oppression of yesteryears. Worse, for Eritreans, he shamelessly embraced their dictator with the irresponsible aim of squeezing and suffocating the TPLF from the South, leaving the pressure from the North to be exerted by his new ally Isaias Afwerki.

Abiy Ahmed launched his campaign of disrespecting the will (and predicament) of Eritreans through a Machiavellian tactic of divide and rule, choosing a regime that survives through the power of the gun at the expense of the beleaguered Eritrean people. He became hyperactive, a restless rabbit jumping from one embarrassing situation to another. He became a prima donna. He became like a mannequin appearing in different attires as a model in an endless catwalk stage.

For a while, not many knew where his diplomatic self-confidence emanates from. But soon it became apparent, and his quickly developed relations with regional entities were revealed. Now it’s evident he has the backing of Mohammed Bin Zayid (MBZ), the leader of the UAE, and to some extent the support of Mohammed Bin Salman, the heir-apparent of the Saudi Arabia. It also became evident that he was involved in the empire-building exercise for the benefit of MBZ, the man who aspires to become the Czar of the Middle East and the Horn of Africa.

The Ethiopians say, genzeb kale bsemay menged alle—where there is money, there is a highway in the skies. That could have been invoked at the time when air travel was at its infancy. Now, air travel is too common, as well as the existence of planes that drop fire and destruction from the air. And the UAE czar has many of such planes, and an air force–for an exhibit, look at Yemen which is across the Red Sea from Eritrea.

For a long time, many Eritrea worked hard promoting peace between Eritrea and Ethiopia in particular, and between all the countries of the region, while the Eritrean regime was only interested in strengthening its grip on power. It didn’t cross the mind of many that Abiy would usher an era of anxiety, frustration, and revive and empower the aggressive forces who harbor ill-intentions towards Eritrea. Sadly, it has been over a year since the naked, aggressive psychological campaigns were launched against Eritrea by the Abiy-inspired chauvinists and extremists.

At first it appeared that some unruly and irresponsible elements were behind the aggressive assaults. However, as time went by, and neither the Ethiopian nor the Eritrean governments attempted to contain the illegal and provocative campaigns, many have concluded the two governments are not only collaborating with the instigators, but they are also emboldening them.

Our region is prone to violence and it lies in a terrible neighborhood.  Several regional craze of violence were exacerbated when other governments got involved in Somalia giving birth to the civil strife that is still raging. And that paved the way for the rise of the Somali Al-Shabab militia. Today, more than a decade after it was established, Al-Shabab is still wreaking havoc in Somalia while innocent Somalis are paying the heavy prices.

So, the assaults by Ethiopian groups against Eritrea is not a benign exercise. It is developing to become a malignant sickness as the church has openly endorsed the craze.

The involvement of the church is too evident to miss, particularly during last week’s Timqet celebration (Epiphany) in Ethiopia. It seems Ethiopia is abandoning its secular system of governing and reverting to the church sanctioned governance like the defunct Solomonic dynasty did. That is how it looked during the Haile Selassie era. Now, those who believed Ethiopia is a secular state need to question it and think again. It seems under Abiy Ahmed, Ethiopia has turned into a theocracy. Otherwise, what is the meaning of all the political statements, large posters of maps incorporating Eritrea as part of Ethiopia in a religious event? What is the meaning of a city-square sized outline of the same insulting map drawn on the grounds where Timqet was being celebrated with heavy presence of the clergy? It’s sad to see the religious paraphernalia being overshadowed by the political images.

Ethiopian extremists engaging in political campaigns exploiting the church’s authority and pursuing aggressive goals is not new to Eritreans. And the price they paid due to that recklessness was so heavy. Currently, the situation in Ethiopia and its political trend is unsettling. The course of Ethiopian politics under Abiy Ahmed is heading towards a dangerous zone and it would be helpful if level-headed people tried to stop it. Otherwise, Abiy Ahmed is inches away from turning into a ruthless dictator who would leave behind him a never-ending trail of blood in the entire region.

If the wrong steps of Abiy Ahmed are to be corrected, Ethiopians need to maintain secular values and distance religious institutions from politics and governance. It would also be a wise decision if Abiy Ahmed distanced himself from the Eritrean dictator, and instead he focused in the internal instability in many parts of Ethiopia, like the security of the people, particularly those in remote areas of Ethiopia who are dying in the scores due to the prevailing social strive. Bringing Ethiopia to where it is now was not an easy feat, taking it back to where it was in 1991, is much easier.