Negarit 61: Are We Sabeans? 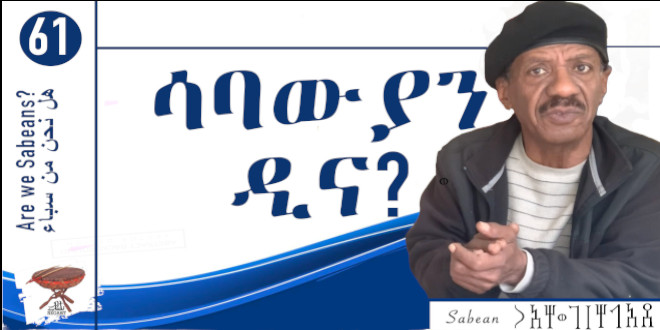 Some people believe belonging to a certain race makes them superior to others. Unfortunately, that racist and bigoted outlook of humanity is the basis for the inflated perception of self-worth. Sadly, living in ignorance under brutal warlords for ages, the psyche of certain races is thus shaped and it has religiously maintained an isolationist fenced culture.

Extremely conservative culture blocks the mind from exploring the cultures in their neighborhood, let alone cultures outside their fences. Though repeated for many years, such challenges to look inward critically, annoys a few who do not want to leave their comfort zone. They always want to hold to the illusion of superiority by remaining loyal to the empty views spiced with bravados.

It’s the 21st century and views established centuries ago are now archaic; one can build of their positive aspects, but staying loyal to a reactionary, anti-modernity culture, is akin to preferring to walk on a muddy road where one stays stuck and remains behind as the world moves forward.

I am doing this because the bigotry and the ignorance in our culture is deplorable. For example, last time I explained the relations of Arabic to our culture. Sadly, even those who know nothing about history have been up in arms since then. I blame the so called pseudo-intellectuals who pump bravado into the empty minds.

Last time I mentioned that Tigrinya doesn’t satiate my intellectual curiosity. And few weeks ago someone posted a list of available Tigrinya books; they were a few dozen titles—most of them are a production of the last two decades, proverbs, biographies, and struggle-era related anecdotes. But yet, even if we went a century back we can only find only  a meagre collection of books written in Tigrinya. With the exception of a few, most of the books are of no literary value, or science, or philosophy, or critical work. They are mostly personal experiences—of little literary value. Here, being a history buff, I can exclude a few authors worthy of the title: Alemseghed Tesfai, Hailesellasie Woldu, a few Arabic writers like Abubaker Kahal and the up and coming Hajji Jabir, and a few others.

If you live in a walled room without a roof, you wouldn’t know that space (the sky) is limitless. You wouldn’t know that mountains, rivers, animals, and people exist. If you do not read and learn, you will remain ignorant of many topics. The best (and humble) thing to do is recognize that shortcoming and work to overcome it.

So, it is with that in mind that, in this episode I will discuss the MUSNED FIDEL, the SABEAN MUSNED alphabets. I am not yet there, but recently I have started to learn it and find for myself. So far, I learned  its relation to the Geez alphabet that we use in our region. I believe that will help us understand we are part of the region and not a people living in the PFDJ test-tube, who should be guarded and distanced from any connection to our region’s civilization, culture, and value system–and to the world’s beyond.

It is important to realize that we will know nothing unless we learn something. And that something cannot be all mythologies and feel-good folktales. That is because such knowledge prevents us from elevating our discourse beyond barroom-like chats—and that is not an enlightened debate. Insults are not traits of enlightenment, regardless of how loudly you scream them. Racism is not a sign of enlightenment, Bigotry is not. Violence is not. Staying stuck in time is not. I hope the guys who boast too much and confidently belittle other cultures would stop sounding like clowns. I do not know how many other cultures they know or read about, but I hope they realize Tigrinya is not the “source of civilization”!

Today’s episode may possibly serve the unfortunate Tigrinya supremacists, (both In Tigrai and Eritrea) and here are some helpful facts.

1. According to Sergew Hable Sellassie says, the oldest Geez inscription at Matara, Eritrea, dates to the 3rd century A.D. “It’s not know when Geez became a language.”

2. There are also other Geez inscriptions that date (5th century BC), in consonants only. Vowel was added to the consonants in the 4th century AD during the reign of King Ezana. The Sabean Musned developed into Geez, and later vowels (Chret) were added to make is vocalized—I have not seen any other language that added vowels to the Musned except Geez, maybe the dots and Teshkeel in Arabic are a similar improvement.

3. Aleqa Taye, holds that  Geez, with 26 consonantal alphabets, was first adapted in Axum around 1300 BC.

4. Sabean was written in MiHrath pattern (like ploughing) first line right to left, and the next line left to right, and so on. The second line is a mirror shape of the right to left. It’s called Musned and gave birth to many characters in the region.

5. Tigrinya is traced back to a time of the Zagwe dynasty in the 13th century—about 750 years ago.

6. “The first work in Tigrinya, by Dabtera Matewos, was published in 1866 by Isenberg, in Basle, Switzerland, and it was a translation of the Four Gospels of the bible. The bible was translated into Tigrait in 1889 in a printing press at Um-Kulu.

7. Geez is related to ancient South Arabian languages, including its script, and writing method, which is derived from the Mesned/Musned writing—this could be the origin of word Sened (document), etc. which is similar to Arabic.

8. Abu al-Aswad al-Du’ali added dots on Arabic to differentiate the consonants because without dots many alphabets were the same (Nun, baa, taa, thaathat are differentiated by dots only).

9. Another governor, Al Hajaj AlTheqefi (around 700 AD), is also credited with adding the diacritical marks on the Arabic Rasm like Lijam (dots) added in later Arabic to distinguish consonant letters. And Harakat  to indicate short vowels which have been used in the Quran, but not in most written Arabic.