Eritrean FM Appears Without His Chaperone 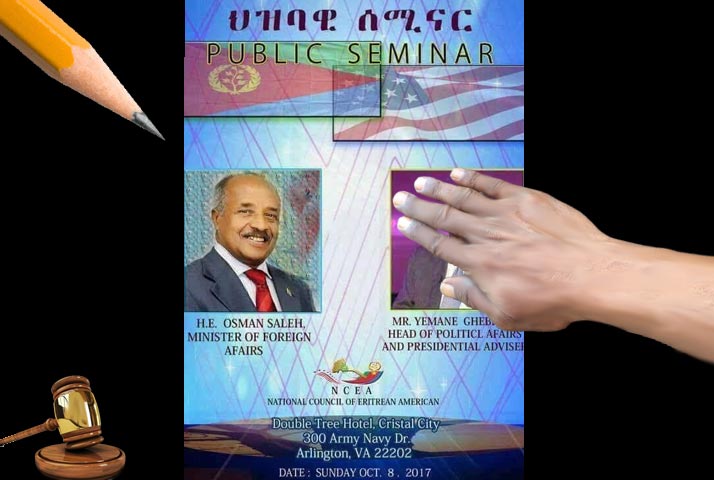 The “National Council of Eritrean-Americans” organized a seminar in which Osman Saleh, the Eritrean Foreign Minister, and Yemane Ghebreab, “adviser” of the Eritrean president, were supposed to be the guest speakers.

The widely-advertised seminar was planned for Saturday, Oct. 7, 2017, at the Double Tree Hotel in Crystal City, VA. However, the seminar didn’t go as planned: the foreign minister showed up for the seminar; his chaperone, Yemane Ghebreab, No. 7 on the list of people considered a national security threat to the USA, didn’t.

This is the third time in as many years that No. 7 violated his travel restrictions and left the confines of New York where he arrived to attend the UN meeting and where he was supposed to remain.

On April 2010, President Barack Obama signed an executive order, 1353, “Blocking Property of Certain Persons Contributing to the Conflict in Somalia” in which Yemane’s name appeared in a list of individuals considered an “unusual and extraordinary threat to the national security and foreign policy of the United States.”

Yemane Ghebreab is No 7 in the annex list, but officials of the Eritrean government have a bad record of violating rules and regulations in the countries they visit.

Despite the travel restriction, on October 2016, Yemane Ghebreab had two meetings scheduled: a much-publicized “public seminar” in the Washington, DC area, along with Foreign Minister Osman Saleh; and the other, unpublicized, was a meeting with The Atlantic Council which had been planned for Wednesday, October 5, 2016. Both were cancelled because No. 7 was not allowed to hold meetings in the USA.

Yemane Ghebread didn’t show up for the seminar at the Double Tree hotel in Crystal City because just like last year, the state department reminded him he is not allowed to be in Washington or to hold public meetings in the USA.

Some sources had reported that Yemane was escorted by the police from the hotel in which the seminar was to be held, but the fact is that the police cannot arrest or detain a visiting diplomat without the knowledge and approval of the State Department, which already had warned Yemane not to hold such a meeting.

The pro-PFDJ organizers of the seminar didn’t explain the reason for Yemane’s absence.

It ended up being rare meeting where Osman Saleh attends without the presence of Yemane Ghebreab, Though he is officially the Foreign Minister of Eritrea, Osman rarely travels on his own unless accompanied by Yemane Ghebreab, who practically acts as his chaperon.

However, it is presumptuous to assume that the state department is not fully aware of what’s going on in the region surrounding Eritrea because, though with every new admiration the senior political appointee might change, the core of the career diplomatic team often remains intact.

Judging from the recent developments, it is unlikely that Eritrea will be able to mend its relations with the USA, at least as long as it pursues a brinkmanship foreign policy, and as long as Trump is in power.

Standing in the way of improving relations with Eritrea are a few issues that do not seem likely to be resolved:

Given the above reasons, it is unlikely that the relations between USA and Eritrea will improve soon.

After attempts to cajole USA to set shop and establish military bases in Eritrea failed in the early 2000s, despite the visit of Secretary of Defense Rumsfeld to Eritrea, and despite a high profile and rare tour that General Abu Zaid gave to Isaias Afwerki of an American aircraft carrier in the Red sea, the embittered Eritrean regime has always been on the offensive blaming the United States of everything befalling the country.

The PFDJ, assisted by the “National Council of Eritrean-Americans”, is more interested in propaganda, to maintain the support of its diaspora base. For a few weeks before the Double Tree Hotel debacle, the rumor mill was churning gossip and spreading news about the eminent normalization of relations with the USA, and how it will educate the Trump administration to help lift the many sanctions imposed against Eritrea.

As of now, the U.S. Embassy in Asmara, Eritrea, has suspended the issuance of all B visas, which are given to visitors for temporary business and tourism purposes.